Could this be the Harper Conservatives' real plan for the housing market?

Ben Rabidoux is is an analyst at M Hanson Advisors, a market research firm, where he focuses on Canadian mortgage and credit trends and their implications for the broader economy. He blogs regularly about the housing market at The Economic Analyst.

The next decade for real estate in Canada will be fundamentally different than the last. Our aging population, a mismatch between where our prices are and where they should be based on our economic performance, and rising interest rates are all reasons for this. However, the greatest difference will be in the availability of credit going forward, and those who try to explain real estate prices in Canada without acknowledging the role of easy, accessible credit over the past ten years or so have completely missed the boat.

Despite three rounds of mortgage rule changes since 2008 that largely corrected previous mistakes, we’ve seen a decade of extraordinarily loose lending in Canada. But the era of cheap credit may soon end–and possibly quite abruptly. News has come from Canada Mortgage and Housing Corporation  and the Office of the Superintendent of Financial Institutions Canada, Canada’s chief financial regulator, that major changes are on the way, and it’s hard to understate how significant they may prove to be.

Here’s what those changes look like, in a nutshell:

1)  CMHC will drastically draw down on mortgage insurance.

CMHC insures nearly 50 per cent of the whopping $1.1 trillion in residential mortgage credit currently outstanding in Canada. The growth in CMHC insurance has been shocking (more on that here)–just look at these charts: 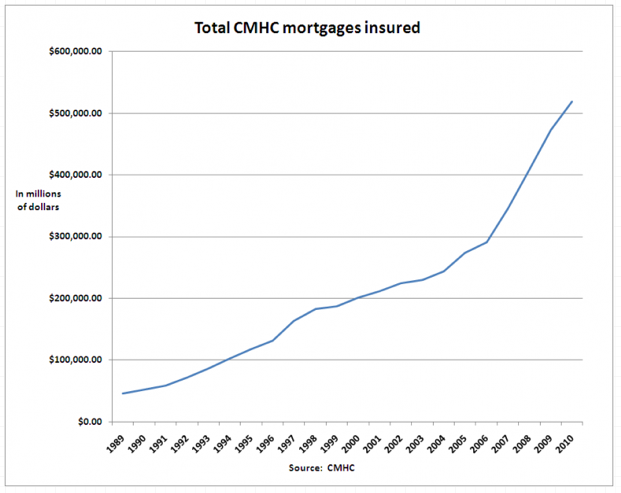 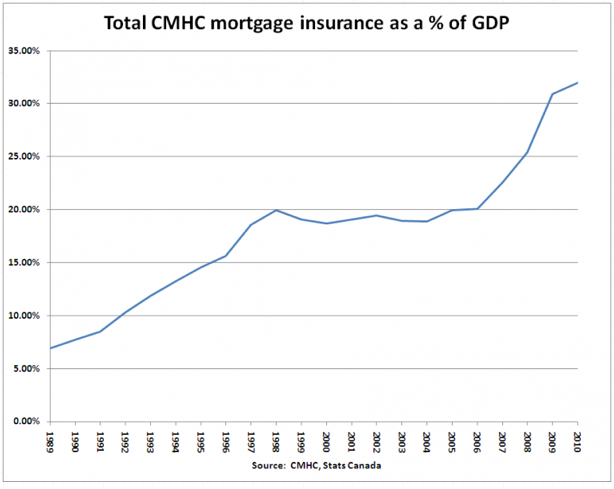 The issue here is that CMHC has a parliamentary-approved mortgage insurance cap of $600 billion and is rapidly approaching that cap. Admittedly, Finance Minister Jim Flaherty has lifted that limit several times before–in 2007 its was $350 billion… meaning that taxpayers’ exposure to the housing market has risen by 70 per cent in just four years. With mounting scrutiny over the sizzling hot housing market and the risks it poses for our public coffers, though, it’s unlikely that Ottawa will step in to raise the cap again this time.

It’s also unlikely that the “private” mortgage insurer, Genworth Canada, will pick up the slack. They too are subject to a parliamentary cap of $250 billion, since the government has to step in to insure 90 per cent of the value of their mortgages too, if they ever become insolvent. So there is a very large contingent liability baked into Genworth’s insurance as well. It seems doubtful that the government would ask CMHC to operate within their cap while letting contingent liabilities build up in the private mortgage insurance market.

A few weeks ago, CMHC indicated in their 2012-2016 Corporate Plan how they plan to proceed given how close they are to their parliamentary cap. The bottom line is that for the next four years their insurance business will need to expand by less than $10 billion a year. Compare this to an average annual increase of close to $50 billion annually between 2007 and 2011. (Granted, a significant portion of this growth in recent years has been in the form of after-market bulk portfolio insurance purchased by the big banks to insure mortgages that do not by law require it, but the end result is the same.) Given that CMHC now accounts for half the mortgage market, it’s fair to say that a rationing of their credit is a very big deal. This is a hard stop if ever I’ve seen one. To appreciate how significant this is, note how the projected growth in mortgage insurance compares to prior years (numbers on the left indicate millions of dollars): 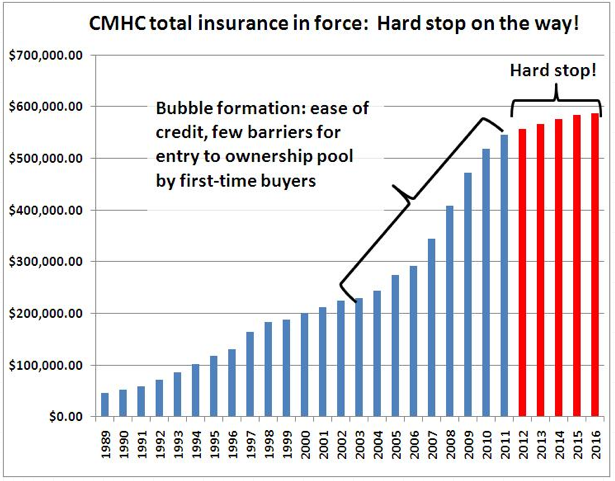 OSFI recently recommended reining in home equity lines of credit, known in the industry as HELOCs. The suggested fixes include capping loans at 65 per cent of the home value, introducing new and more conservative means of estimating how much a residence is worth, and amortizing the loans (meaning that borrowers would have to repay the principal within a certain time frame, as in a mortgage, whereas now they can simply keep paying interest on their HELOCs). If adopted, these changes would be massive. And they would put considerable pressure on consumer spending, which, as the chart below shows, has grown to account for over 63 per cent of the Canadian economy: 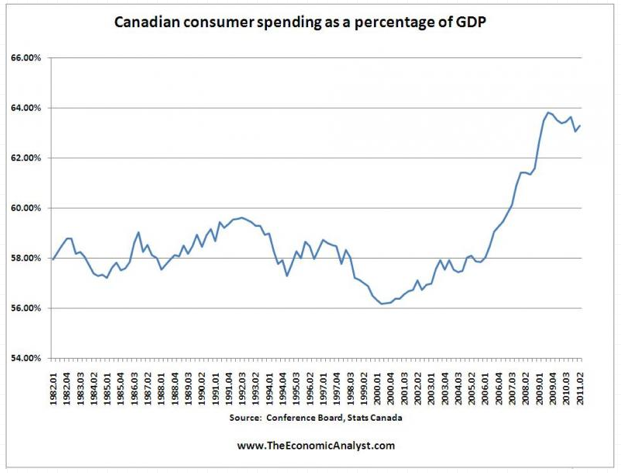 OSFI also proposed tightening some of the rules around conventional mortgages (i.e. where the buyer puts down more than 20 per cent of the home value). Here’s a sample of what the recommendations include:

These are guidelines and are open to public discussion until May (expect fierce opposition, particularly among mortgage brokers), but, ultimately, the decision to implement these measures is entirely in OSFI’s hands.

The media have been quick to say that the federal budget did nothing about the housing market, because it contained no new measures targeting amortization lengths or down payment requirements. But the government seems to have opted for a more subtle strategy. Instead, Flaherty has indicated that Ottawa will propose increased oversight of CMHC. Recently, the International Monetary Fund suggested CMHC fall under the jurisdiction of OSFI. I suspect this may well be what the government has in mind. (CMHC currently falls under the jurisdiction of the minister responsible for Human Resources and Skills Development Canada–WHY EXACTLY??)

Putting CMHC into OSFI hands may well represent a greater tightening of credit than Flaherty could have done by shortening amortization lengths or increasing down payments. OSFI regulators, in fact, have gone public on several occasions to express concerns about underwriting standards in Canada. Expect significant changes to happen, though likely behind the scenes.

As an aside, this would represent a pretty cowardly move on the part of Flaherty and the Harper Conservatives who very clearly recognize the risks baked into the housing market, want it to cool, but also want the blame to fall on someone else should the “soft landing” turn into a bust. This may well be political cowardice at its finest.