With Kijiji out of the picture, Canada's job vacancy picture sure looks a whole lot different

The furor over the Temporary Foreign Worker program shows no signs of letting up, with Auditor-General Michael Ferguson warning this week that Canada’s jobs data is woefully inadequate and the opposition calling for the AG to conduct a full review of the program, something Ferguson said he was open to. Meanwhile, economist Mike Moffatt has raised troubling questions here and here about the extent to which companies in southwestern Ontario are using temporary foreign workers even when there’s no evidence of labour shortages there.

Back on Monday the Globe and Mail noted that Employment and Social Development Canada has quietly changed the way it gathers labour data to ignore job postings from Kijiji and other online classified sites. In doing so, the vacancy rate plunges from more than four per cent to just 1.5 per cent. That move followed a warning from the Parliamentary Budget Office in March that such sites were completely unreliable for assessing the labour market.  Take those sites out of the picture, the PBO said, and the national labour shortage that Ottawa has gone on about for months would look dramatically different.

From this week’s Econowatch section in Maclean’s magazine, here’s our Chart of the Week, showing just how far apart the federal government and Statistics Canada (the federal government’s own data collection agency) have been on the vacancy rate in the country, and what things look like with Kijiji out of the picture: 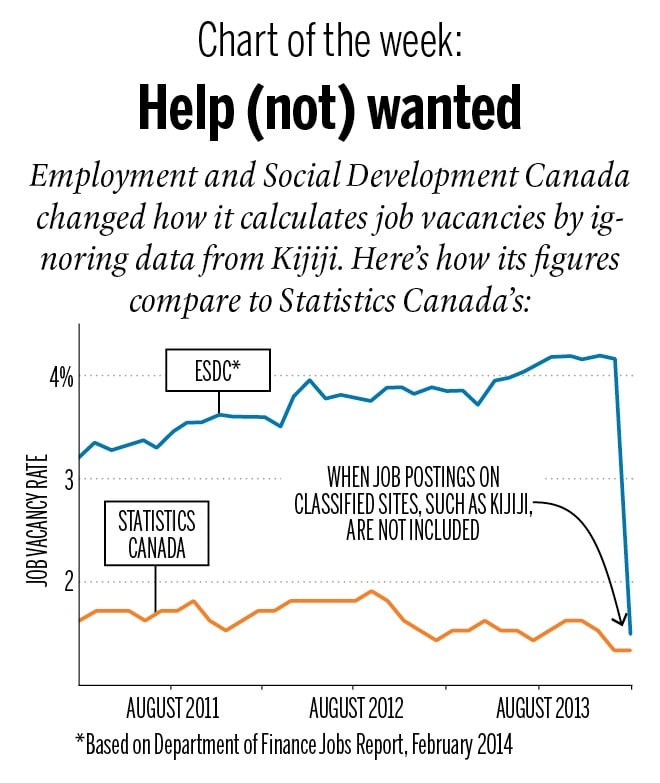 Because ESDC doesn’t publish an actual job vacancy rate, we relied on a chart the Finance Department published in the “Jobs Report,” released alongside the budget in February. Both Finance and ESDC draw on the same data provided by WANTED Analytics. It’s worth noting that while ESDC has kicked its Kijiji habit, the Globe story says Finance appears committed to using it as a source for labour data.