Tracking Canada's economy under Justin Trudeau and his father

Drawing on historical statistics, here's how the economy under Justin is shaping up against that of his father at this stage in Pierre's first term 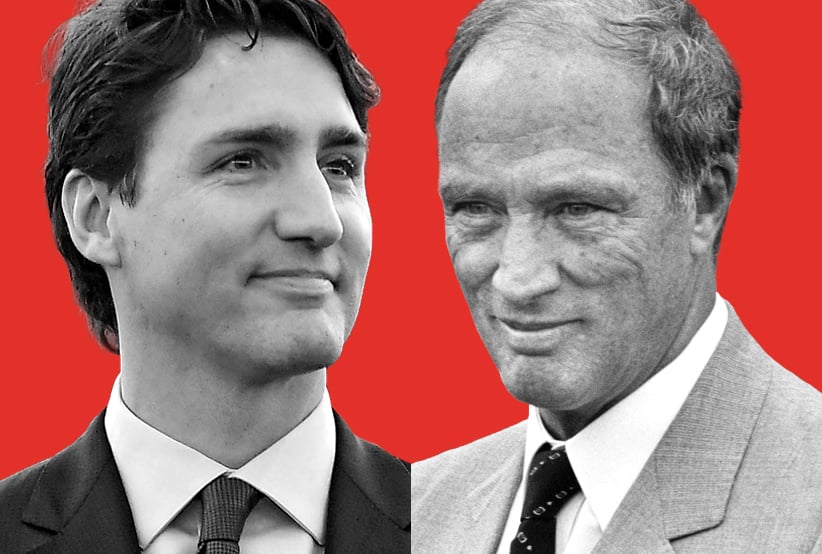 There’s just no separating Prime Minister Justin Trudeau from his father. Justin was said to have stepped out of Pierre’s shadow when he led the Liberals to election victory in 2015, but since then the old man has played a recurring role in the curation of his son’s political persona—Pierre’s most recent appearance coming in a photograph of him, alongside Donald Trump in 1981, that the prime minister gave to the president in Washington in late February.

In total, Pierre led the country, and dominated the national psyche, for nearly 16 years. Justin is approaching the halfway point of only his second year. That is hardly long enough to draw any conclusions about how the country will fare under his leadership, but it’s interesting to start the process.

READ MORE: The lessons for Justin Trudeau in his father’s first budget

Using Project Link, an effort undertaken by Laval University economics professor Stephen Gordon to assemble decades of fragmented Statistics Canada series into a workable, historical summary of Canada’s economy, it’s possible to compare the economy under both leaders on a number of measures.

Here’s how the economy under Justin Trudeau is shaping up against that of his father at this stage in Pierre’s term.

As noted here, Pierre inherited an economy firing on all cylinders from his predecessor Lester Pearson. Annual growth adjusted for inflation was clocking in at around 4.5 per cent, a pace unheard of today. But while growth was weak last year, recent indicators show parts of the economy are firming.

There are two measures of Canada’s employment picture tracked below—the labour force survey (LFS), which is the most closely watched job report each month, and the survey of employment payrolls and hours (SEPH), which is based on interviews with employers—the latter is also the job measure favoured by many economists. Both show the job market under Pierre off to a stronger start—which was certainly easier when the country’s working age population was growing six times faster than it is today—though the LFS charts reflects the pick-up in jobs in recent months.

… and the Survey of Employee Payrolls and Hours.

As noted above Canada’s job market has turned in some impressive results in recent months. The unemployment rate fell to 6.6 per cent in February, the lowest level in two years. It still has some way to go before getting anywhere near to the unemployment rate Canada enjoyed throughout the 1960s and early 1970s.

While employment is growing, wages have only managed to crawl back to where they were in late 2015. Real weekly earnings were growing at a faster pace under Pierre—but that was also a time of fast rising consumer prices, setting up the inflation panic of the late 1970s and early 1980s.

Aside from the late spike in exports at this point in Pierre’s first term, the trade picture under both economies was starting to align at a relatively moribund rate of growth. That matters more now, when trade accounts for around 32 per cent of GDP—and was as high as 44 per cent in 2000—compared to under 20 per cent during Pierre’s early years.

Canada’s manufacturers have staged a strong turnaround in terms of sales in recent months, thanks no doubt to the weaker dollar. It’s one of the few measures where Justin’s economy is on pace to outperform the economy under his father.

During the first budgets of both Justin and Pierre, big deficits were announced. In last year’s budget, finance minister Bill Morneau revealed that the government would blow through its election promise to run a deficit of no more than $10 billion, and returning Canada’s finances back to the black before the next election. Canada is now looking at an accumulated $100 billion in deficits over the next four years. In late December the Finance department released a long-term fiscal projection that showed that if current policies are maintained, Canada faces deficits out to around 2050. However, the Finance report also included a projection that Canada’s economy would quadruple in size. Measured against GDP, Canada’s deficit picture doesn’t look as scary over the next few years as it did under Pierre—but any number of factors, from an economic downturn to rising borrowing costs, could seriously damage Canada’s fiscal outlook. Just look at what happened under Pierre.

As with the outlook for deficits, Canada’s debt picture, measured against GDP, is projected to hold relatively steady over the next decade and even decline by 2025. And as with deficits, there is a lot that could go wrong. Again, look at the situation under Pierre. When he came to office, Canada’s debt-to-GDP ratio was on a post-war decline from more than 100 per cent to less than 20 per cent in 1974. After that, Canada’s debt ballooned. By the time Pierre left office for the second time in 1984, it would reach 50 per cent of GDP, climbing to more than 70 per cent under Brian Mulroney.