Opinion: If the Liberals really wanted to help the economy, they'd design a policy with ambitious entrepreneurs in mind—not an army of small-business owners content to stay that way 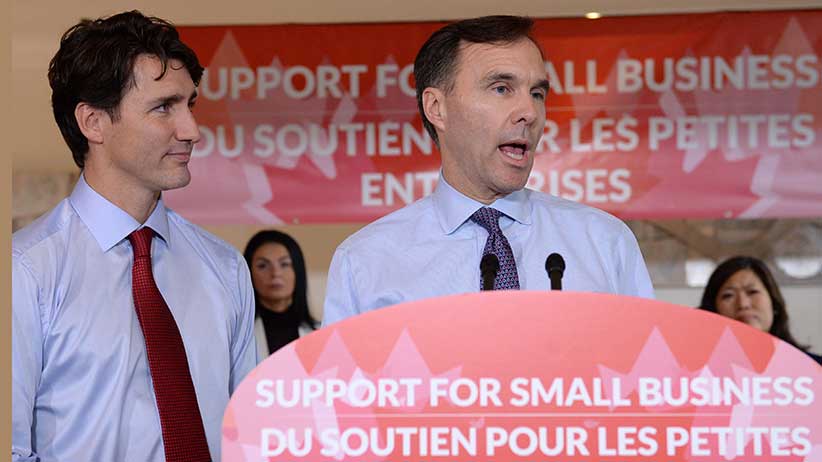 Finance Minister Bill Morneau speaks to members of the media as Prime Minister Justin Trudeau looks on at a press conference on tax reforms in Stouffville, Ont., on Monday, October 16, 2017. THE CANADIAN PRESS/Nathan Denette

I might be wrong. It was only Day One of Small Business Week, and Prime Minister Justin Trudeau said he intended to celebrate by meting out little announcements on tax policy for the duration. So there’s a chance that a footnote on Wednesday, a clarification on Thursday, or an asterisk on Friday will change things. But I think he might want me and all the other freelancers out there to incorporate.

The reason I think that is Trudeau and Finance Minister Bill Morneau rushed from a morning caucus meeting in Ottawa to an Italian restaurant in Stouffville, Ont. to say they will drop the small business tax rate to 10 per cent on January 1 and then all the way down to nine per cent at the start of 2019.

I got into the typing business because I was weak at math, but that looks like an arbitrage opportunity for the growing ranks of self-employed Canadians. Back in July, when Morneau released his star-crossed attempt at tax reform, I was under the impression he was worried about the spike in one-person corporations. But after listening to his boss on Oct. 16, I guess I have to admit I was wrong in that interpretation. Trudeau was asked directly about the wisdom of widening the gap between the tax rates paid by individuals and the rate paid by small businesses, which is pretty wide for all but the poorest of taxpayers. This is what he said: “We want to encourage people to become entrepreneurs, to start small businesses. We know small businesses are at the heart of the success of our economy.”

Trudeau’s voice rose when he said “heart of the economy,” so I guess he wants us to know that he means it. He continued: “It’s extraordinary to see the impact that a small family business like this one has, not just in the community, but in the overall economy as we add up the hard work of millions of Canadians from coast to coast to coast.”

Here’s the thing. Any economy that relies on the likes of me to keep its blood pumping will be at risk of cardiac arrest. I won’t be hiring anyone, and I won’t be helping the next Jeff Bezos launch his or her start-up. But a single-digit tax rate might finally inspire me to call a tax lawyer to consider my options as a corporation. Thanks to our summer-long debate over #taxunfairness, I know where to find some good ones.

You wouldn’t know it from listening to the disciples of Ayn Rand on Twitter, but not all entrepreneurs are special, and therefore not all of them deserve unique treatment under the tax code. For every Tobi Lutke, there are dozens of stay-at-home lawyers, consultants, accountants and the like who simply prefer working for themselves. Same for the owners of thousands of smaller companies. Some dream of doing great things. For others, it’s a lifestyle choice. They might end up employing some people, but their real motivation for starting a company is their dislike of managerial hierarchy. The contribution to the economy of these employers is no greater than that of a salaried manager at larger company.

But middle managers don’t have large lobby groups working on their behalf. By 2019, the average combined federal-provincial-territorial tax rate on the first $500,000 a smaller company generates will be 12.9 percent. The only other nation in the Group of Seven that taxes its entrepreneurs so lightly is France, where the comparable rate is 15 percent, according to background material provided by the Finance Department.

Trudeau and Morneau described their tax cut as creating a competitive advantage. Maybe. Germany is one of the most productive economies on the planet, yet it forces its smaller companies to pay a tax rate of about 30 percent. Ottawa will forego some $3 billion in revenue over five years, which will raise questions about whether Trudeau and Morneau might seek to recoup the money elsewhere, given they’ve also indicated they intend to narrow the budget deficit over that period.

The deficit won’t be an issue if Canada’s entrepreneurs actually use their windfall over the next couple of years to hire and invest, thus broadening the tax base and generating revenue. That’s far from certain. The International Monetary Fund for a couple of years now has tried to dissuade Canada of the myth that there is something magical about smaller companies. The IMF’s research shows that it takes ambitious entrepreneurs to create jobs at a rate the makes a difference, not an army of small-business owners who are content to stay that way.

If Trudeau and Morneau were serious about economic growth, they would have tied the preferential rate to hiring. They might also have lowered the rate bigger companies pay on income in order to give upstarts a reason to leave the Canadian Federation of Independent Business behind. Instead, the federal government simply sweetened an already generous advantage enjoyed by a noisy group of business owners. It might make those people happier, and it may even help my brothers and sisters in the gig economy. But there is little reason to think the tax cut will do much for the economy. That would have taken a policy designed with the most ambitious entrepreneurs in mind, not the ones interested only in preserving the status quo. However, there are more votes in the later group than there are in the former.