Trump's economy looks just like Obama's, except for one important thing

As Trump marks his first year in office, he's made America's economy the same again—the same as Obama's, that is. 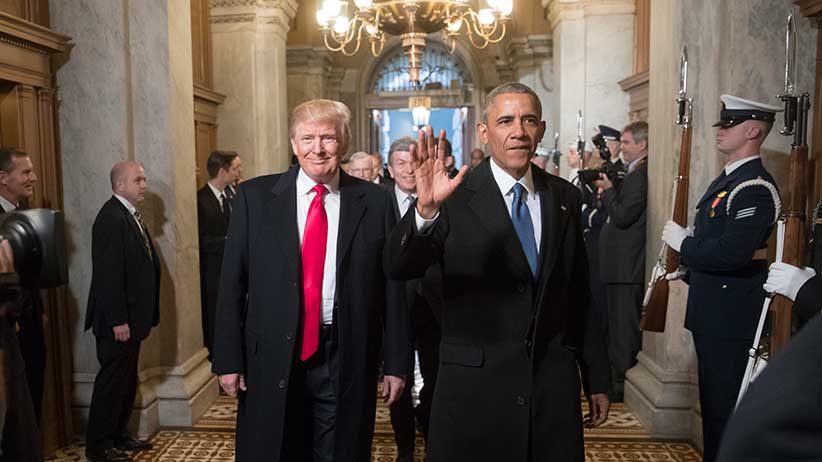 The revelation that no passengers died in commercial jet crashes anywhere in the world in 2017 came as a happy surprise at the end of a turbulent year. What wasn’t a surprise? That President Donald Trump took the credit with a ‘you’re welcome’ tweet saying he’d been “very strict” with the airline industry. Never mind that Trump’s boast didn’t hold up to any level of scrutiny. It was one more reminder that if there’s a spot of good news on offer in the world, Trump will claim it’s because he’s president.

That’s especially the case when it comes to the U.S. economy. Every positive employment report or new stock market high during the first year of his presidency has brought with it rounds of self-congratulation. Consider this exchange, when Fox News’s Laura Ingraham invited Trump to tell viewers just how fantastic he’s been for the economy.

TRUMP: One of the greatest in the history of our country, and I’m in here now 10 months, and we are setting record after record, day after day. I think we hit another one today. No, I’m not getting enough credit for it, because a lot of the reason is enthusiasm level, business level, and also the fact that I’ve cut regulations to the extent that I’ve cut them. I mean, I can tell you jobs that were never going to get built are now being built. Take a look at the pipelines – the Keystone Pipelines, the Dakota Access Pipelines…

So with the first anniversary of Trump’s inauguration nearly here, it’s a good time to examine whether America really is experiencing the greatest economic revival in its history?

That’s because there was nothing to recover from. Jobs, stocks and GDP are rising under Trump, just as they did under Obama. In fact, by almost every measure, the performance of the economy under Trump is indistinguishable from Obama’s second term—save for one important metric that was disappointingly weak under Obama: business investment.

Before delving into the details, it has to be said that the factors that determine how well an economy performs have very little to do with who happens to be in charge. Free market economies boom and bust, and whether a president (or, ahem, a prime minister) can lay claim to overseeing a period of expansion mostly comes down to dumb luck. Yes, there are policy decisions that can have impacts on some aspects of the economy over the long term, but those are nearly impossible to measure in the here and now. Likewise, the choice of who to put in charge of a country’s central bank—which sets interest rates and influences borrowing and spending by businesses and consumers—is hugely important, but a president has no say over what a central bank chief does once he or she is appointed. There are simply no direct levers a leader can push or pull to control economic growth.

With that said, let’s take a look at several key measures of America’s economic performance under Obama and Trump, using the most recent available data. This analysis uses Obama’s second term, since his first turn in the White House started in the midst of the Great Recession and so a comparison would be useless. Besides, Trump has insisted the economy he inherited from Obama was a “really bad” “failed” “crumbling” “disaster” so that’s what Trump’s performance should be measured against.

Here’s how the Trump and Obama economies stack up:

Jobs might have been the dominant plank in Trump’s election campaign, but employment was growing at a slightly quicker pace by this point in Obama’s second term.(The chart below is an index of job growth under both presidents, with 100 representing where things stood in January 2013 and January 2017.) 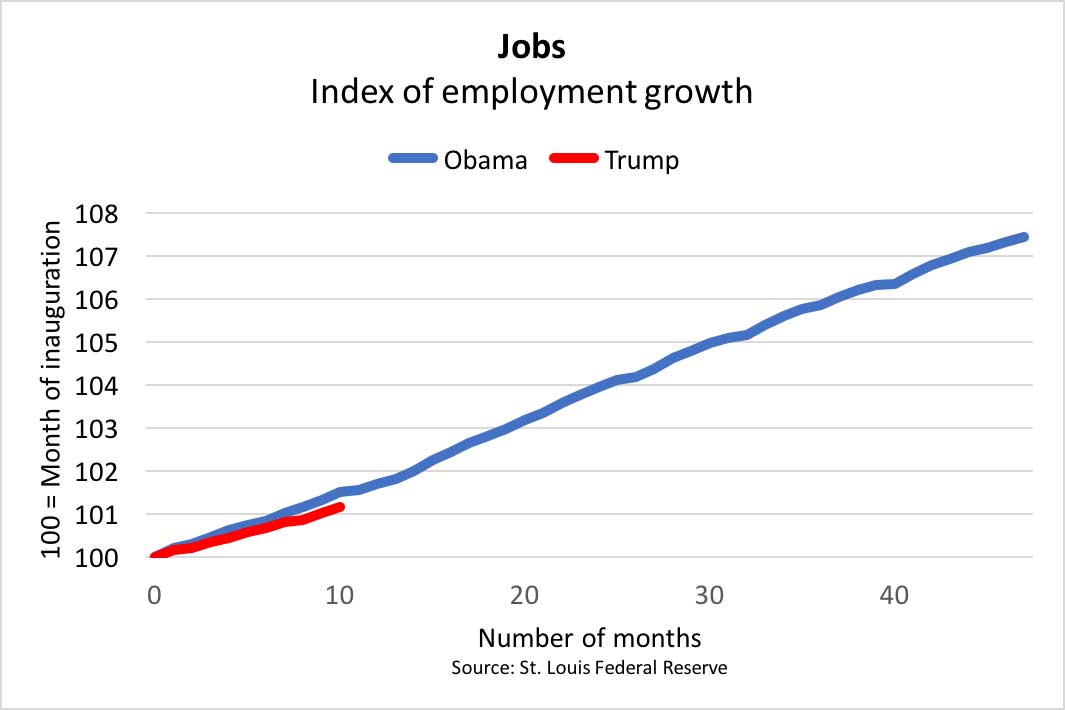 The challenge for Trump going forward is that unemployment in the U.S. is already at such a low level, at just 4.1 per cent, that the easy gains have been had. On the campaign trail Trump regularly stated that 96 million American workers were shut out of the economy. But while there were indeed 96.2 million people not in the labour force in December—a new all-time high—that figure includes retirees, students, people with family responsibilities and the disabled. In fact, those who report they “do not want a job” make up 95 per cent of Americans not in the labour force, leaving just five million who want a job but for whatever reason are not looking.

“By finally enforcing our immigration laws, we will raise wages”- Donald Trump, Feb. 28, 2017

On this metric, the point goes to Trump, ever so slightly. The slow pace of wage gains since the end of the Great Recession has stumped economists and the U.S. Federal Reserve. The unemployment rate has been below its 70-year average since 2014, and a tight labour market would typically make it easier for workers to demand bigger paycheques. But that hasn’t been happening. Could the recent uptick in wage growth mean things are changing? Perhaps, but with higher wages has come quicker inflation, and when wages are adjusted for inflation, workers have seen their pay rise by just 0.5 per cent over the past two years. 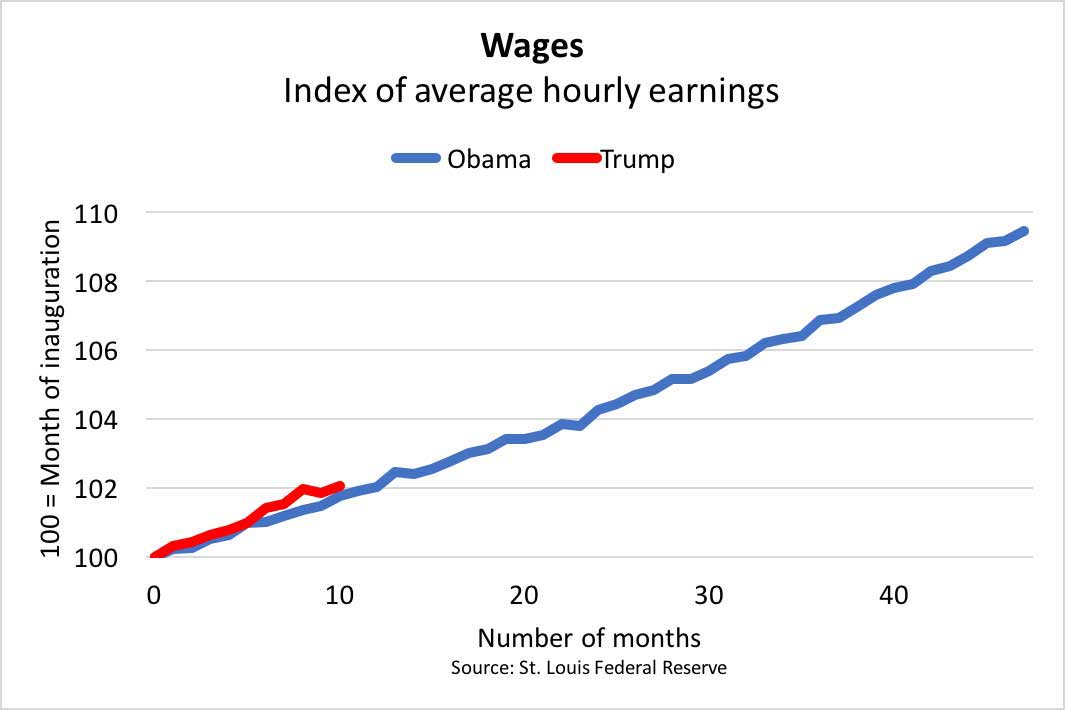 Trump likes to claim that growth under his presidency will skyrocket to levels not seen in decades. He’s not off to a bad start, but it’s not spectacular either. The thing is, it’s difficult to know which measure of growth Trump will gauge his performance by—annual growth or quarterly growth at an annual rate. He’s used them interchangeably as it suits him, either criticizing Obama for his slow growth by one measure (“On a yearly basis, as you know, the last administration, during an eight year period, never hit three percent” he said in August) or praising himself for growth by another (“Very little reporting about the GREAT GDP numbers announced yesterday… Best consecutive Q’s in years!” he tweeted in October).

Regardless, his vow to grow the U.S. economy by up to six per cent on an annual basis would be nothing short of extraordinary, and not just because of the demographic and technological headwinds facing America. Real (inflation-adjusted) growth like that is exceedingly scarce in the U.S. anymore—it happened last in 1984, when Ronald Reagan was in the White House and the economy expanded by 7.3 per cent, and prior to that one year you have to go back to the 1960s to find regular growth at that pace. For now, growth is similar to where it was at this point in Obama’s second term.

UPDATE: In late January the U.S. Bureau of Economic Analysis released GDP figures for the fourth quarter of 2017. The chart below has been updated. 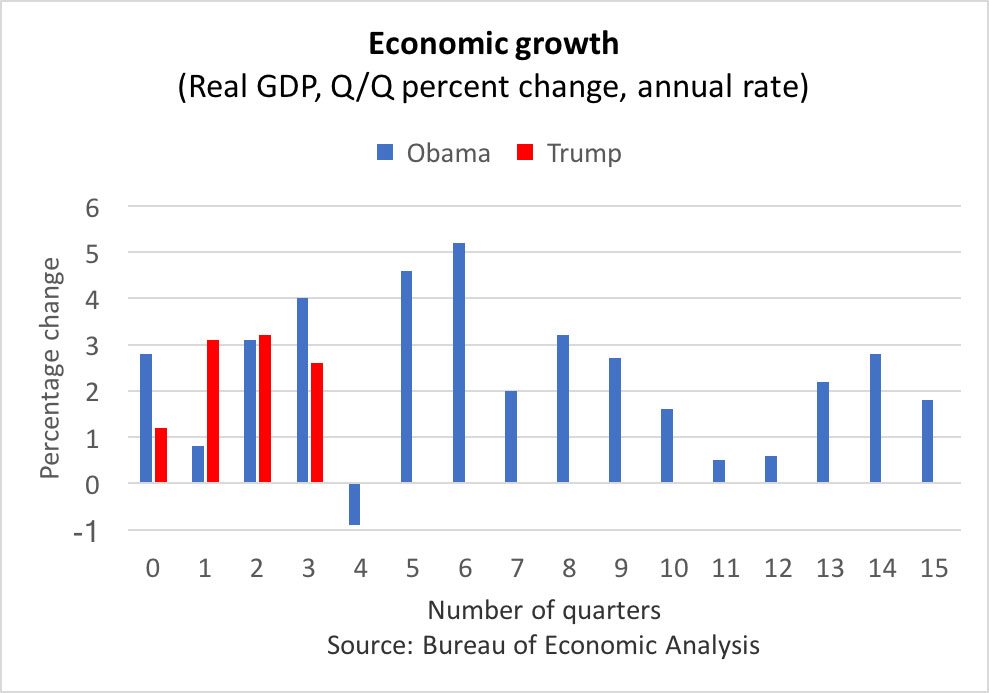 Trump obsesses over no other economic gauge like he does the stock market. It’s pathological. Since he took office he has tweeted about stock prices 53 times. In interviews and speeches he has taken credit for the bull market countless more. “Can you imagine if ‘O’ was president and had these numbers,” he tweeted earlier this month.

What’s to imagine? The bull market under Trump is rising at the same velocity it did under Obama—having already nearly doubled during Obama’s first term. If there’s any difference under Trump, it’s that the journey has been smoother for investors. 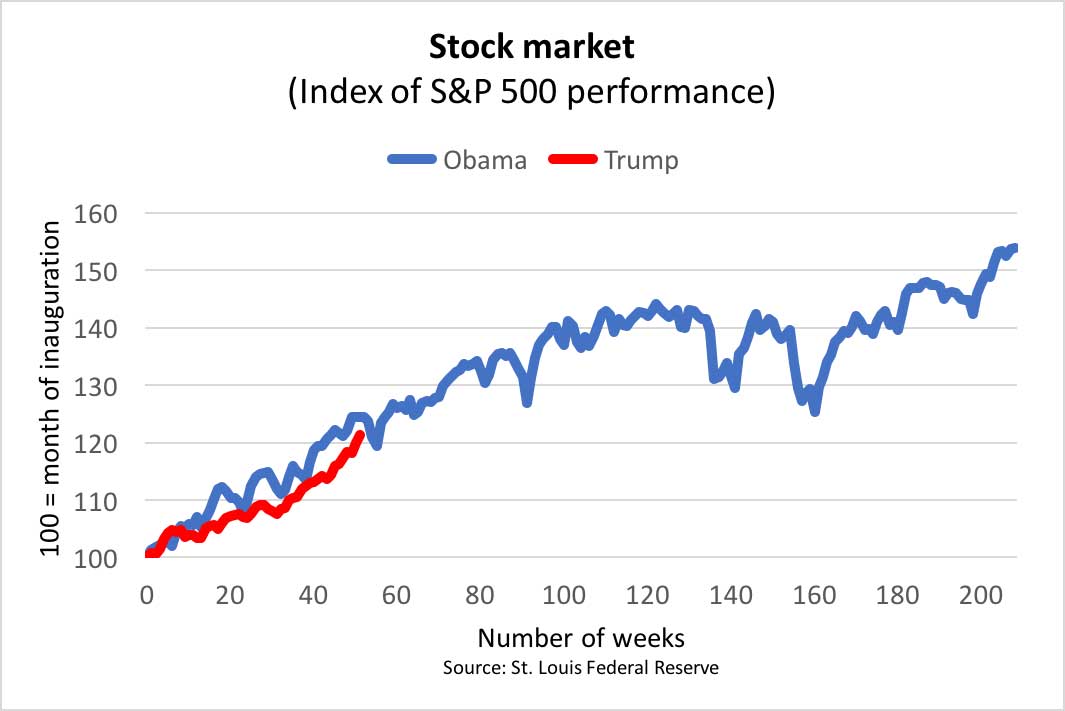 The biggest knock against the Obama economy was the wariness of businesses to plough money back into their operations. Business investment matters because it’s a direct line from that to job growth and higher wages. And throughout Obama’s second term, business investment as measured by manufacturers’ new orders declined. That trend has reversed itself during Trump’s first year. Businesses are more optimistic than they have been in years, and several large companies have announced investments in the wake of the Republican tax cuts. Whether companies follow through with actual dollars will ultimately determine whether or not Trump’s economy is just a repeat of Obama’s second term. 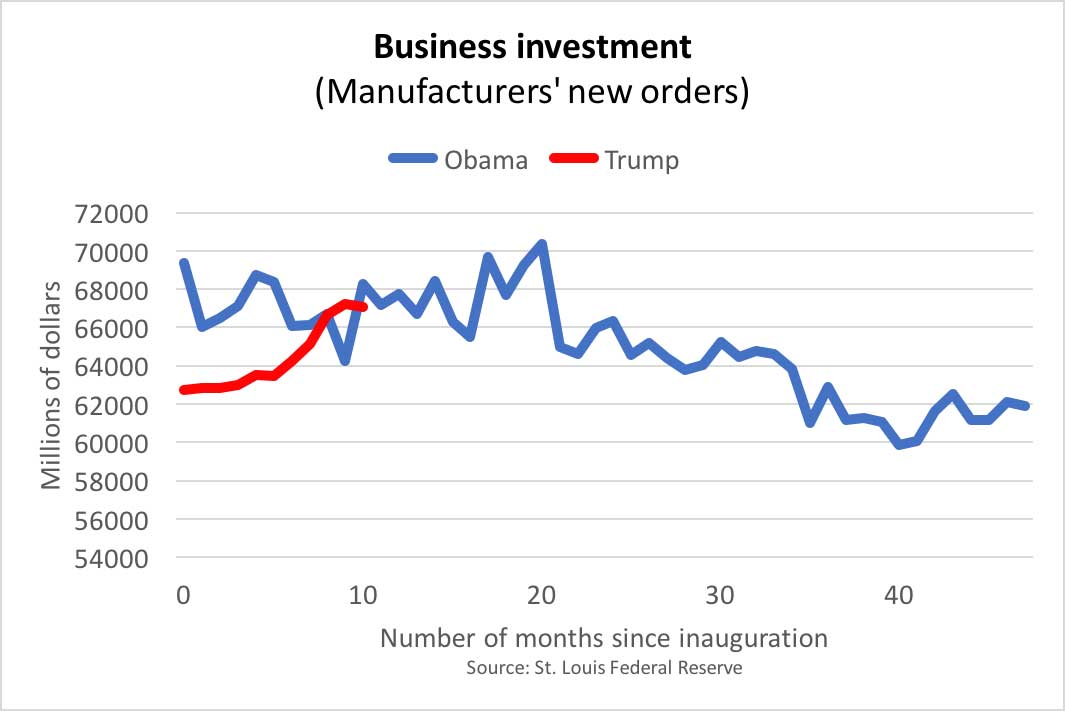