We are not heading to fiscal crisis 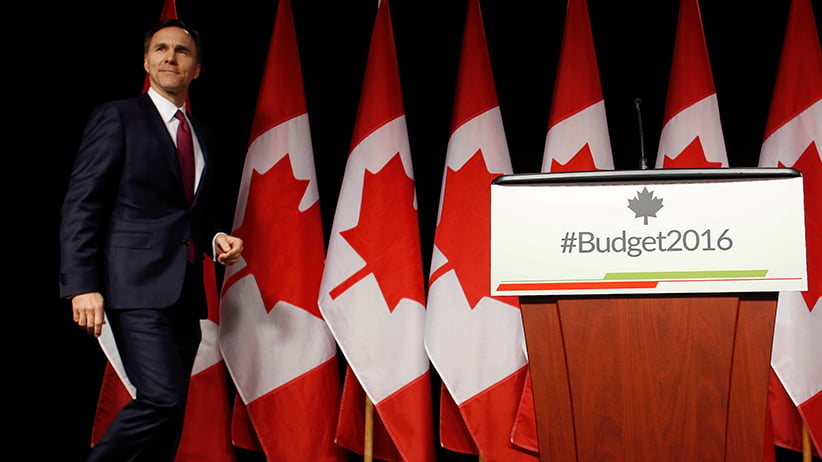 Finance Minister Bill Morneau makes his way to hold a news conference before the release of his federal budget in Ottawa, Tuesday March 22, 2016. (Fred Chartrand/CP)

The 2016 budget generated a lot of commentary on fiscal anchors and fiscal sustainability. Many commentators draw on the harsh 1995 federal budget as the example we need to avoid. For example, former Finance officials Scott Clark and Peter Devries argue that we must raise the GST immediately to avoid a nightmare 1990s situation. NDP Leader Thomas Mulcair warns that social program cuts may be coming again soon, also drawing on the 1995 scenario. Economist Jack Mintz decorates his warnings about debt with images of a bomb, hinting that federal fiscal mismanagement is at risk of blowing up the economy.

I have some good news for these commentators: the 1995 debt crisis is not very relevant to our current circumstance, so they can stop worrying. There are lots of solid ways to criticize the 2016 budget and the spending plan of the Trudeau Liberals. But the 1995 crisis example should be sealed in concrete and dropped into the deepest part of the Atlantic Ocean. Let me show you why.

The ultimate measure of the sustainability of fiscal policy is the debt-to-GDP ratio. This ratio compares the size of the debt to our collective ability to pay for it. When this ratio rises, we can get into a spiral where interest costs drive the debt higher, which then leads to more interest costs and we end up in a crisis. Back in 1995, Canada was very close to such a crisis. We had annual deficits around five per cent of GDP, which drove the debt-to-GDP ratio over 65 per cent. With the yield on long-term government bonds then exceeding eight per cent, debt servicing cost grew to a very large six per cent of GDP. The infamous 1995 budget turned the corner by chopping billions from federal spending and raising taxes until budget balance was reached in 1997.

The current scenario is very different. The 2016 budget projects a deficit of 1.5 per cent of GDP, which will push our debt to GDP ratio up to 32.5 per cent. With today’s long bonds yielding less than two per cent, public debt charges are only 1.3 per cent of GDP. If the Liberal government is able to hold to their plan, the deficit will fall to 0.6 per cent of GDP by 2021 and the debt to GDP ratio will recede to 30.9 per cent. As Stephen Gordon points out, that’s a big “if.” Meeting these Budget 2016 targets will require the Liberal government to have a steely spine and keep tight control of spending.

Maybe the resolve of the Liberal government will fail. Will that put us at risk of a 1995 crisis? No, not even close.

Let’s work through the situation in detail. What if growth stays low and the Liberals allow the deficit to stay at 1.5 per cent of GDP instead of shrinking it in the years to come. How long would it take to get back to the nightmare 1995 scenario?

Here’s the answer. I’ve graphed some scenarios below out to the year 2099. I assume the deficit stays constant at the 2016 level of 1.5 per cent of GDP out into the future. I’ve chosen three growth scenarios, with nominal annual growth of 2.5 per cent, four per cent, and five per cent. If you factor in expected inflation, these correspond to real growth of about 0.5 per cent, two per cent, and three per cent. As a benchmark, the average nominal GDP growth in the 2000-14 era was 4.25 per cent. I’ve also put in the 2016 Budget plan and the 1995-96 debt-to-GDP ratio as reference points. The data can be found here. 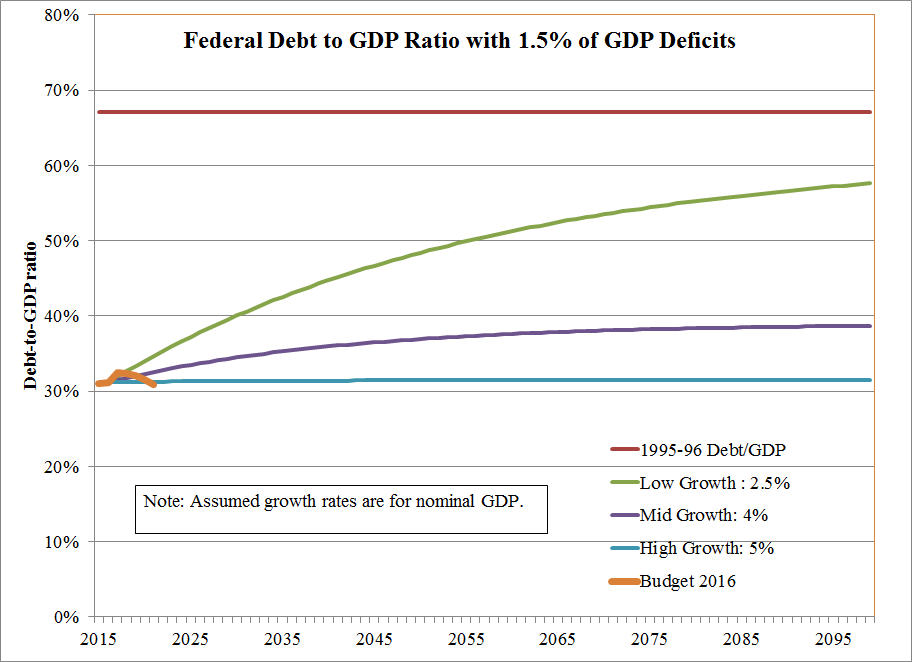 If you went one step further into fiscal profligacy and assumed that the extra interest costs generated by the extra debt were on top of the 1.5 per cent deficits, would things change? In the low-growth case you would hit the 1995 level of debt in 2049—33 years from now. In the four per cent growth case it would be in the 2070s, more than 50 years from now. Of course, to generate a 1995-style crisis you don’t just need the high debt-to-GDP ratio you also need eight per cent bond yields—and long-bond yields are currently under two per cent.

So, the 2016 budget does not put us on the road to 1995. We are not on the road. We are not in the car. We have not even put on our shoes, had breakfast, or gotten out of bed. In order to make the 1995 crisis happen again, we would need to see sustained deficits on the order of $100 billion for a decade. If deficits approach those levels, I will have my debt-crisis bomb decorations ready for my future Maclean’s posts.

Does this mean the federal government should spend without bound? No. There are three solid reasons why I think the debt-to-GDP ratio should not be allowed to rise much above current levels. First, we need to preserve the ability to act with fiscal policy in the case of a future recession. Second, the stress of health spending on provincial governments over the next generation will put pressure on taxpayers’ wallets, and the federal take from those wallets should not grow. Third, I worry about private debt accumulation in Canada and the explicit backing of mortgage bonds by the Canadian government. If the housing market should falter, the federal government needs the capacity to act. These are all good reasons to limit the growth of the federal debt-to-GDP ratio and to pay close attention to changes in the Liberal fiscal plan.

Beyond the debt-to-GDP ratio, we also need to stay very attentive to the quality of government spending. Are spending decisions wise? Is money being wasted? Is there really a return on the investment of hard-earned tax dollars for the extra things the government is spending on? The Liberal government should be challenged vigorously for each of its spending decisions. However, it is much more work to analyze each new government initiative to see if it meets a cost-benefit test. It’s easier to simply say that a debt crisis awaits if more is spent. I think we need more of the hard cost-benefit work and less of the lazy debt crisis talk.

Canada has many economic challenges it needs to address right now—weak growth, too much private debt, rapid technological and industrial change. I don’t know the current government has the best answers to these challenges. But I do know that a federal public debt crisis isn’t going to be what stops them from acting.