What can we learn from Quebec's child care experience?

The province's child care program has done a lot for working moms, not so much for their kids 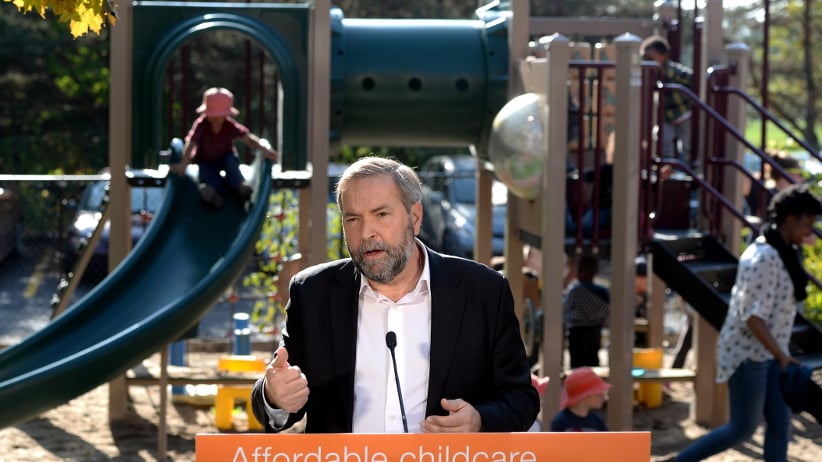 On Tuesday, NDP Leader Thomas Mulcair announced his ambitions for a new national child care plan to be implemented if the NDP should form government in 2015. The policy backgrounder (available here) explains that the NDP plans to work out deals with each province and territory to set benchmarks for programs the provinces and territories would run. If the province agrees to the benchmarks, Ottawa would share funding for the province’s program on a 60-40 basis (with Ottawa picking up the larger 60 per cent share). The funding would be phased in, starting with $290 million in 2015-16, but reaching $5 billion when fully realized in eight years. A key element of the provincial and territorial deals would be a commitment to cap the out-of-pocket costs to parents at $15 per day.

We are still more than a year before the scheduled election date of Oct. 19th, 2015, so there will be lots of time to hear more about the new NDP plan and to dig through the policy in detail. One challenge we will face is that there really isn’t much of a “national plan” in this proposal, since provinces will be free to design their own program, subject to some restrictions. Encouraging diversity in provincial child care programs is not a bad thing at all, in my view. I think provinces are much closer to the needs of child care users and can each tailor a program that meets that province’s needs best; federalism is good. However, the consequence for keen policy analysts is that we can only speculate what Saskatchewan or New Brunswick might have in mind in 2015, and we don’t know what precise conditions Mulcair plans to impose on the provinces in exchange for federal funds.

Instead of engaging in speculation, let’s stick to what we know right now: the Quebec model. Other provinces might go in different directions, but surely we should learn as much as we can from Quebec’s $7-per-day program as a starting place. There are two major research findings from Quebec’s experience that have been confirmed by several independent teams of researchers. The first is that the labour-market participation of mothers increased substantially and sustainably. The second finding suggests that there is no evidence of widespread improved social or education outcomes for kids in Quebec, compared to kids in the rest of the country, since the Quebec model was implemented in the 1990s.

On the expansion of the maternal workforce, multiple studies have found large increases in the proportion of mothers working in Quebec compared to other provinces, and compared to Quebecers of previous generations. This boost in work matters in many ways. First, it rebalances the position of the sexes in the household by enhancing the employability of women and their ability to contribute to family income. Second, it provides an economic boost by increasing the productive capacity of the economy, making more use of the potential labour we have available. Third, the public purse benefits from increased tax revenue on that extra economic activity.

That final point about increased tax revenue received extra attention in the NDP’s announcement. They cited research by respected economist Pierre Fortin that suggests the tax-revenue haul from the extra economic activity would be substantial. My own research corroborates the idea that the tax-revenue gain should not be ignored, although, in my view, the magnitude of that gain might not reach as far as the numbers provided by Fortin. We can hash out those details over the next year, but, for now, it bears repeating that Fortin’s economic arguments deserve attention.

The second area of research into Quebec’s program has been on child development and outcomes. On that front, there is little evidence of any widespread gains from any of the three teams of researchers (here, here, and here) who have investigated. If there are gains, they are concentrated in more disadvantaged children. Advocates of universal programs such as Quebec’s often cite evidence from showcase programs in the U.S. that targeted at-risk kids, but it takes a leap of faith to apply those results to kids from more advantaged families.

It’s important to remember that, just because the Quebec program may not have boosted child achievement or development, this does not mean that good-quality child care doesn’t matter. It simply means that, in the absence of the Quebec program, most families might have already been making pretty good choices for their kids from the options they had available.

In my view, the way to put these two research findings into policy action is to recognize that the Quebec program combines two distinct elements. The Quebec model combined a subsidized price for child care (which unlocked the labour-supply effect) with a publicly designed and organized program (which appears not to have made a positive impact). These two elements can be separated. Getting the price of child care right can be done through the tax system, using existing measures such as the child care expense deduction, which could be adjusted to reflect today’s actual child care costs. If that’s not enough, further subsidies can be offered through the tax system. But none of this requires a full-on, one-size-fits-all public system as we’ve seen in Quebec.

Here’s what I would like fleshed out about the NDP’s new plan: What kind of diversity in programs would they allow? If some province wants to take the federal money to offer partial child care vouchers to parents, combined with investments in new high-quality spaces targeted to at-risk neighbourhoods, would that be okay? Or are we talking about only small deviations from the established Quebec model? In addition, we need to dig more deeply into the numbers provided by the NDP. Can they deliver a true universal program for just $5 billion, or are we being sold a pig in a poke? We have a year to figure out if the NDP’s child care policy proposal makes sense, so let’s start talking.