What happens when the walls go up?

Trump wants to tear up trade deals like NAFTA. How will a trade-dependent economy like Canada cope in a protectionist world? 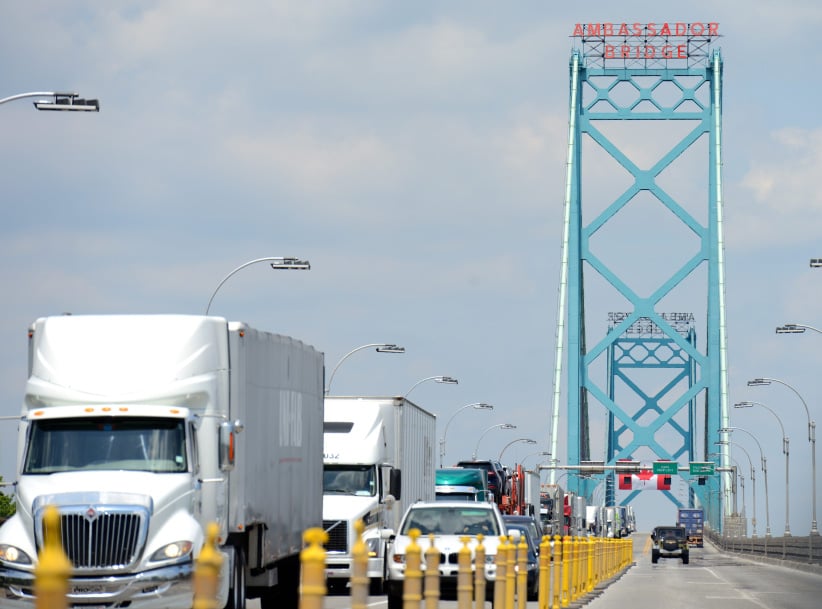 It’s often said, in reference to the economy, that when the U.S. sneezes, Canada catches a cold. Well, in the words of Samantha Bee, the sharp-tongued comedian and former Daily Show correspondent (and Hillary Clinton supporter), U.S. voters “just hoicked up a marmalade hairball.”

Ever since Donald Trump’s shocking U.S. election victory, Canadian economists have scrambled to diagnose the potential economic impact of a president Trump on this side of the border. On the campaign trail, Trump promised, among other things, to levy giant tariffs against China and Mexico, as well as to potentially rip up the North American Free Trade Agreement, or NAFTA, which he called “one of the worst trade deals ever signed in the history of our country.”

That’s obviously not great for Canada, a self-described “trading nation” and a NAFTA member alongside Mexico. More than 75 per cent of our exports head to the United States. Complex products like automobiles are effectively manufactured in both countries simultaneously, with engine parts and upholstered interior pieces whisked back and forth across the border by trailer truck. No wonder, then, Prime Minister Trudeau this week struck a conciliatory tone by saying “if the Americans want to talk about NAFTA, I’m more than happy to talk about it.”

There are, however, opportunities for Canada in Trump’s America. Most of the president-elect’s anti-trade invective has so far been squarely aimed at Mexico and China, which Canadian exporters compete with for customers. It’s thus conceivable that Canada could emerge from a Trump presidency with a greater share of the U.S. market than it had before. Trump, like Trudeau, has also pledged significant fiscal stimulus­—much of it in the form of deep tax cuts—that could light a fire under the U.S. economy in the short term, dragging the sluggish Canadian economy along with it.

Of course, anticipating what Trump will do as president is no easier than predicting the content of his next ill-advised tweet. Which policies will Trump pursue most vigorously? Which ones will be too extreme for a Republican-controlled House and Senate to stomach? And, perhaps most important, will Canada be perceived by the Trump administration as an economic partner or competitor? “We’re in an extremely uncertain environment,” says Royce Mendes, an economist at CIBC. “Some of his more extreme rhetoric—he may either walk it back, or Congress may do it for him.”

While Trump and Trudeau actually share common ground on a key issue—both profess to be looking out for those who were left behind by the global economy—that’s pretty much where the similarities end. Trudeau wants to grow Canada’s economy by investing in high-value products and services that can be sold abroad via new trade deals with the European Union, Asia-Pacific and even China. Trump, by contrast, has promised to throw up barriers at the U.S. border to prevent other countries from “stealing” U.S. jobs—and NAFTA is at the top of his hit list.

Trump blames the 23-year-old agreement— which has coincided with a nearly fourfold increase in trade among the three countries to US$1 trillion—for moving high-paying U.S. manufacturing jobs to Mexico, where labour costs are cheaper. Others, however, say the decline in U.S. manufacturing—an estimated five million manufacturing jobs have been lost over the past 15 years (about 500,000 were lost in Canada between 2000 and 2009)—has more to do with automation technologies that have lessened the need for flesh and blood workers. “A lot of the manufacturing jobs have simply become obsolete,” says Bernard Wolf, a professor emeritus of economics at York University’s Schulich School of Business. “Trump never talks about that.”

Can Trump simply pull out of NAFTA? Mendes says international trade agreements are one of the few areas where the U.S. executive branch can take action without consulting Congress. Article 2205 of NAFTA basically says all Trump would need to do is give Canada and Mexico six months notice. What happens after that is less clear. The U.S. hasn’t withdrawn from a trade treaty since 1866 (ironically, it was the Reciprocity Treaty signed between the U.S. and British North America, which would later become Canada) so there are bound to be legal challenges.

Trump is also likely to face pushback from Congress, despite it remaining under Republican control. Many Republicans consider themselves staunch free-traders and would face extreme pressure from U.S. multinational firms in their districts, many of which have spent two decades rewiring their businesses to take advantage of NAFTA rules. “The supply chains that run through Canada, the U.S. and Mexico are unbelievably intricate,” Wolf says. “The auto industry is probably the best example. A spider couldn’t weave a more interesting web. Look at the Ambassador Bridge in Windsor and how much stuff is moving back and forth.”

Even if Trump stopped short of pulling out of NAFTA, there’s still plenty he could do to make life for America’s trade partners miserable. “He also has unilateral power to raise tariffs on imports from certain countries—it’s basically to address large and persistent current account deficits,” says Mendes. “That might be one of the first waves of protectionism we see before he goes out and tries to change any long-standing trade agreements.”

There are bigger picture trade issues for Canada to consider, too. If Trump makes good on a promise to levy a 35 per cent tariff on Mexican imports and 45 per cent tariffs from China, and possibly even pulls out of the World Trade Organization, other countries around the world can be expected to follow suit. Any drift toward widespread isolationism around the globe would have an outsized impact on Canada, since two-thirds of the economy is based on international trade, with the fastest growth coming from outside North America. It’s already starting to happen. The Obama administration admitted this week that the U.S.-led Trans-Pacific Partnership trade deal, in the works since 2008, has no chance of going forward following Trump’s victory. Canada is one of 12 countries who signed that trade agreement, which links North America with the fast-growing Pacific Rim. “We stand to be really hurt by any move toward protectionism by the U.S. and, in turn, globally,” Wolf says. “Nobody’s going to sit back and say, ‘Okay U.S., you want to pull back? We’re going to leave our borders open.’ ”

Given all the uncertainty, it’s imperative for Ottawa to stay in Washington’s good books. In fact, Mendes argues it’s possible Canada could even come out ahead if we play our cards right—at least in the near term. Why? If Trump pulls out of NAFTA, the 1989 Free Trade Agreement between the U.S. and Canada would presumably come back into force (assuming Trump doesn’t want to exit that pact, too). That could actually make it easier for Canadian firms to win U.S. customers since Mexican exporters would see much of their cost advantage disappear. “We could actually gain a little bit,” Mendes says. “The key here is to keep a bilateral trade deal with the U.S. and, secondly, that we can keep our exchange rate weak enough to make us look attractive.”

Canada could also benefit indirectly from Trump’s ambitious plan to cut taxes. In addition to slashing personal income taxes, particularly for the ultra-wealthy, Trump is proposing to more than halve the tax charged to U.S. corporations to 15 per cent. This, no doubt, is why stock markets quickly got over their initial shock and rallied, with the S&P 500 index climbing more than two per cent in the days right after the election.

The trouble is Trump’s tax proposals don’t make a lot of fiscal sense. “It’s super expensive,” says Craig Alexander, the chief economist at the Conference Board of Canada. “It would probably push up U.S. debt by $4 trillion to $5 trillion over the next 10 years.” That would drive up the U.S. debt-to-GDP ratio to about 95 per cent by 2026—putting the U.S. in the same league as Spain. For that reason, Alexander says he doesn’t expect a Republican Congress to sign off on Trump’s tax plan in its current form. This, after all, is a party that went to the mat repeatedly with the Obama administration in a bid to rein in government spending and keep the federal debt under control. Nevertheless, Alexander warns that Canada must be mindful that Trump’s efforts to lower U.S. corporate taxes don’t erode Canada’s tax competitiveness, prompting a stampede of firms across the border.

For those concerned about Canada’s economic stability, the hot-blooded and inexperienced Donald Trump is hardly an ideal pick for U.S. president. And we can forget about Trudeau forging another cross-border “bromance” like he did with President Barack Obama. That said, Trudeau’s hardly the first Prime Minister to be asked to overcome personal and political differences for the sake of the important Canada-U.S. relationship. And, who knows, Trump might decide it doesn’t hurt to have a close ally along America’s northern border if he’s determined to crack down on the one to the south. “They may be very different people with very different approaches, but that doesn’t mean they can’t work together,” Alexander says of Trump and Trudeau. “The key message here is to stay tuned.”