What provinces can learn from B.C.'s sound finances

B.C. still faces challenges with its budget, but far and away it has the best finances of any province in the country. 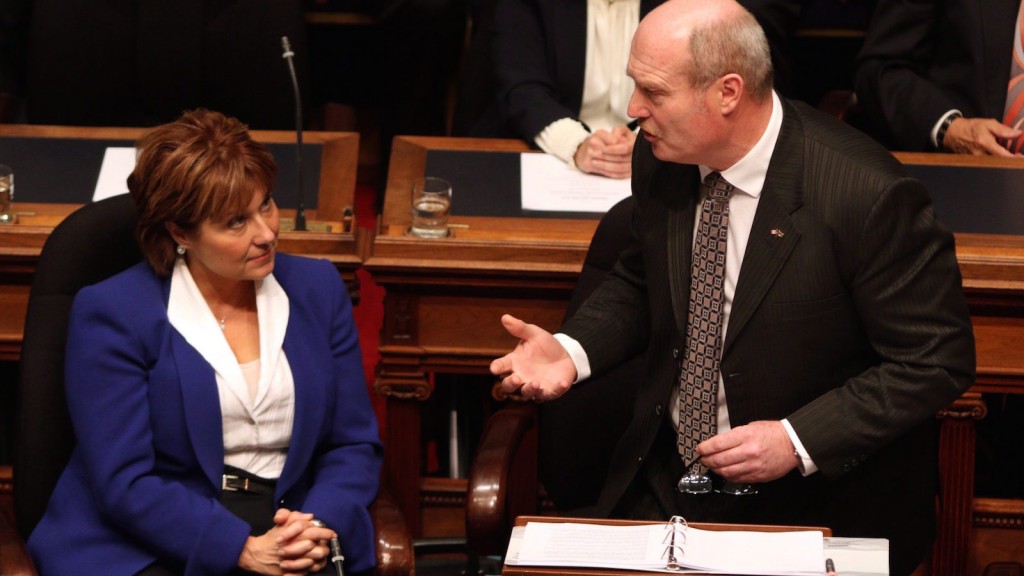 B.C. Finance Minister Michael de Jong, right, tables a balanced budget for a fourth year in a row as Premier Christy Clark looks on at the Legislative Assembly, in Victoria on Tuesday, Feb. 16, 2016. THE CANADIAN PRESS/Chad Hipolito

British Columbia is well known for its mild weather and mountain landscapes. In presenting the budget this week, B.C.’s Finance Minister Mike de Jong has claimed a further distinction: far and away the best fiscal position of any province in the country. Not only are both corporate and income tax rates the lowest of any province, but the budget is also in surplus by $627 million and accumulated debt at 16 per cent of GDP is about one-third the size of Ontario or Quebec.

How did B.C. manage this feat? It wasn’t through fortuitous resource revenue—which makes up only five per cent of B.C.’s total revenue. Instead, there were two drivers: economic growth and tight expenditure management. Lets look at each of these in turn, with an eye to how other provinces might learn from B.C.’s success.

Looking over the sources of revenue in B.C., the ones that gained most are personal and corporate income taxes. The tax rates stayed the same, so the growth in revenue is driven by having a larger economy against which to apply those fixed tax rates. The lesson for other jurisdictions? A growing economy fixes a lot of fiscal problems.

The other big driver of B.C.’s budget success is expenditure management. Digging into the numbers for health spending, the projected increase for 2016-17 is 2.7 per cent, following a 2.8 per cent increase in the year just now coming to a close. That level of growth is sustainable, given the rate of increase in revenues. Moreover, if you look back to the 2013 B.C. budget, health spending for 2015-16 was projected at $17.41 billion. The actual numbers have come in at $17.45 billion. So not only is the growth in health spending targeted at a sustainable level, but the B.C. government is also hitting the targets.

For provinces, compensation for workers in the broader public sector (including hospitals, schools, etc.) accounts for over half of total spending. If overall expenditures are to be kept under control, no task is more important than public sector wage negotiations. I don’t have intimate knowledge of how the B.C. government has approached public sector compensation control, but two elements stand out for me.

First, the outcome of the prolonged 2014 teacher strike was an important contributor to spending restraint in itself. But it also showed other public sector negotiators this provincial government would be tough at the bargaining table and not back down, even in the face of large-scale public demonstrations and social media campaigns by affected workers and their supporters.

Second, the B.C. government has introduced an innovative feature to public sector contracts—the Economic Stability Mandate, which imposed lower baseline wage increases in return for bonus wage increases if provincial GDP growth exceeded targets. This innovation seems to have been accepted without much labour strife. Moreover, the 2016 B.C. budget revealed that the bonus conditions were satisfied, which should increase the salience and credibility of this wage mechanism going forward.

While the outlook on the budget is quite rosy for B.C., three major challenges remain to be faced.

First, the economy of B.C. depends heavily on an outsized contribution from the residential construction and real estate sector. Fiscally, this matters not just through revenue from the Property Transfer Tax, which brings in more than a billion dollars a year, but also indirectly through personal and corporate income taxes on the sector. I don’t care to hazard a guess about the resilience of the elevated B.C. housing market, but it is fair to note the dependence of the rosy fiscal outlook on the continuation of a vigorous residential real estate sector.

The second challenge comes from two poorly designed taxes that account for 20 per cent of provincial revenue. One is the MSP health premium. This tax levies the same amount for middle and high earners, presenting a hefty $900 per year cost per adult. While low earners are technically exempt, the exemption is administratively complex, leading about one-quarter of those eligible for the exemption to miss out. The other poorly designed tax is the provincial sales tax, which penalizes new investment by companies relative to the GST/HST in most other provinces. There was some progress in the budget on both these fronts, as Finance Minister de Jong announced an expansion of MSP health premium exemptions and also a commission on tax competitiveness explicitly to study improvements to the sales tax regime.

The third challenge facing the B.C. fiscal outlook is how to handle demands for increases in spending. With a large surplus in hand, it doesn’t take much time to draw up lists of suggestions on new spending ideas. Economist Iglika Ivanova of the Canadian Centre for Policy Alternatives offers her priority spending items here. Many of her suggestions are potentially productive contributions to improving B.C.’s social environment, but if B.C.’s fiscal advantage is to be maintained, the finance minister will need to be selective in deploying extra resources.

B.C. is in a very strong fiscal position.  With a provincial election due in just over a year, I suspect B.C. voters will be confronted with the pleasant choice between parties offering balanced budgets and tax cuts or balanced budgets with more social spending. That appealing menu of choices will contrast with the bleaker fiscal outlook on offer in many other provinces.