When it comes to trade, the U.K. is stuck in the past

The nostalgists running the U.K. love the idea of trade because it equates to a time when England set the terms, and not the weakened position it's now in 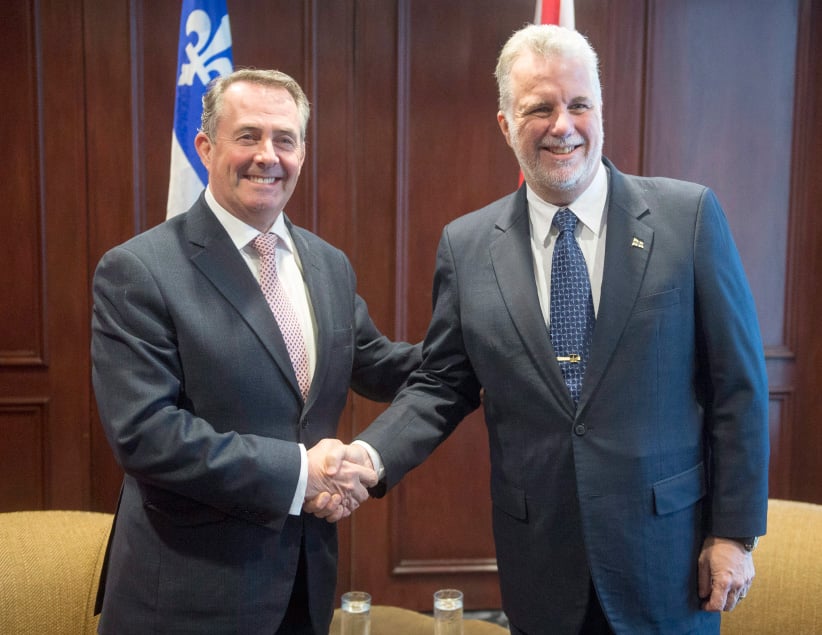 The United Kingdom’s trade minister, Liam Fox, was in Toronto and Montreal this week, pursuing the Brexiteers’ dream of returning the Commonwealth to its ancient glory. Like virtually every British politician I’ve observed out in the world, Fox has a way with oratory. He endeared himself to his audience in Montreal by sharing that his father taught French in Scotland. (“That’s why I speak French with a Scottish accent,” he said.)

And like virtually every British politician I’ve observed out in the world, Fox hasn’t quite come to grips with the fact that his country no longer is a top-tier global power. He called Canada one of Britain’s “longest-serving and closest allies.” (Emphasis mine.) Once Brexit is done, the government of Theresa May would very much like to do a free-trade agreement with the successor state of the North American colonies that behaved themselves during the later half of the 1700s. Listening to Fox, you get the impression that over in London, they assume Canada will be eager to serve once more.

Who knows? Maybe we will. Trade Minister François-Philippe Champagne told reporters after Fox’s speech to members of the Montreal Council on Foreign Relations that a bilateral trade deal with the U.K. is “completely on the radar.” Champagne, who was promoted from the ranks of Prime Minister Justin Trudeau’s parliamentary secretaries on January 10, has already met Fox twice. The U.K. is Canada’s third-biggest trading partner after the United States and China. Big companies such as Royal Bank of Canada and Bombardier do significant business there. “It will be important to maintain stability,” Champagne said.

Fox waxed nostalgic about his country’s glory days. “For more than a century, our country was the greatest trading nation in the world,” he said. “We were synonymous with trade.” Fox acknowledged that his country does less of what made it rich these days, something that he and May intend to correct. Britain, Fox said, will be a “global hub” that “will stand in defense of open trade.”

To be sure, history matters. But if you aren’t suffering from cognitive dissonance by now, then you either are a committed Monarchist or you skipped the section in your Canadian history book about the Corn Laws. The past is very good at obscuring the present. The current batch of nostalgists running the U.K. loves the idea of trade because it equates it with a time when England set the terms. Fox reminded his audience in Montreal that his country represents the world’s fifth-largest economy. This a favourite factoid of the Brexiteers. What they fail to mention is the U.K.’s gross domestic product is a fraction of the size of that of the U.S. and China. Yet May is enthusiastically pursuing a bilateral trade deal with the U.S., promising Britons that she will secure favourable terms. Alan Beattie of the Financial Times observes that May will find this difficult, if not impossible. Beattie recounted an episode from a parliamentary hearing last year at which a Conservative member of Parliament asked a trade expert from Brussels whether an independent Britain should pursue trade deals with smaller, weaker countries before writing new terms with the European Union. “You are the smaller, weaker party,” the expert said, according to Beattie’s account.

The U.K.’s competitive advantage up until June 23, 2016 was that it was the European country with American characteristics. Now, it is an English-speaking outpost on the European periphery whose access to that vast market likely will be little better than that of Canada or Switzerland. There is a material competitive difference between the first and the second. Fox’s department didn’t exist seven months ago, and he is barred by law from negotiating trade deals until the U.K. officially leaves the EU, a process that will likely take two years. Seasoned trade negotiators the world over will eat him alive because he will be showing up with little to offer.

But that is the British government’s problem. The harm that Fox will cause the rest of us is that he will be yet another persuasive voice reducing “liberalization” to bilateral trade agreements. A true champion of freer trade would advocate larger deals, which reduce the ability of the biggest players to dictate the terms and ensure that the benefits of trade—bigger markets, innovation, lower prices—are spread widely. But Fox isn’t that kind of free trader. Like U.S. President Donald Trump, the British government appears to favour negotiations they think they can win. “Multilateral deals have some time to wait,” he said in Montreal.

The Trudeau government also can be seduced by the bilateral agreement. It talks excitedly about starting separate talks with China, Japan and India, yet it equivocates on whether it likes the Trans-Pacific Partnership. Still, I’m not sure Champagne is ready to do a deal with the U.K. at any price. He made clear that Canada’s priority in Europe remains its agreement with the EU. The terms of that arrangement will apply to the U.K. as long as the country remains a member of the 28-member bloc. In that case, Fox could be well acquainted with the terms at which his negotiations with Canada will begin. “We are going to start with that as a basis,” Champagne said. “We start from a strong base.”

Not exactly the demandeur that the Brexiteers remember from their own reading of history.