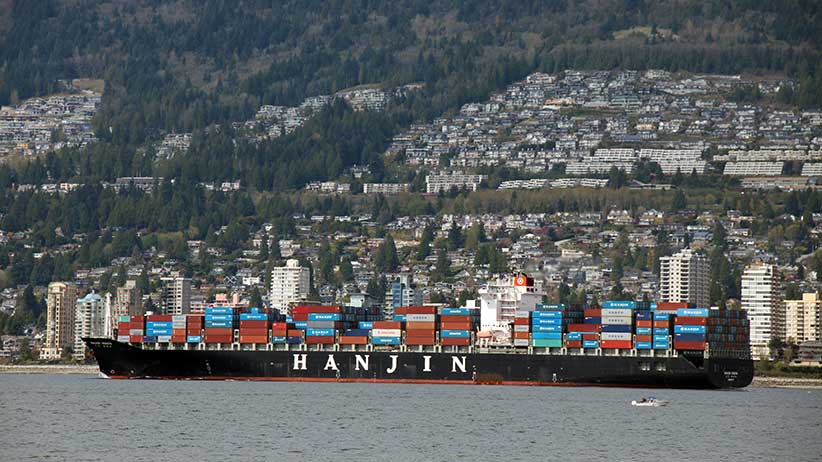 Fact: You don’t encounter many Canadians in Asia.

That’s my experience, and that’s the experience of Mairead Lavery, senior vice-president of business development at Export Development Canada, who has spent far more time in the region than many of us. “I run into the Europeans, I run into Americans,” Lavery said. “Would I love to bump into more Canadians? Absolutely.”

Lavery phoned late last month from Sydney, the site of EDC’s newest international office. Australia seemed to me an odd place for Canada’s export-finance agency to open a beachhead. The country’s economy is very similar to ours, so what could we offer Australians that they don’t already do themselves? Lavery dismantled that argument. The similarities mean lots of opportunities for Australians and Canadians to join forces and do some real damage in global markets. “There is a large base of companies that can collaborate,” she said.

But strengthening the commercial bond between two former British colonies isn’t the only reason EDC decided to set up in Oz. It might not even be the most important one. Australia has been much better at opening doors to Asia’s various high-growth markets than Canada. So rather than wait on Ottawa to catch up in the race for freer-trade agreements, EDC will try to steer more Canadian companies towards Asian markets via a safe third country that speaks English and adheres to common law.

READ: The worrying silence around Canada’s trade talks with China

Whatever it takes. If Corporate Canada were as engaged with the world as EDC, it would be easier to get excited about Canada’s economic prospects. Instead, it’s hard not to wonder whether decades of indifference are about to catch up with us. We went all-in on the United States table, and a new dealer there has changed the rules of the game.

It’s tempting to think the Canadian economy survived the first year of U.S. President Donald Trump just fine. As Bank of Canada governor Stephen Poloz said in Toronto on Dec. 14, “We can look back at 2017 with considerable satisfaction.” Gross domestic product probably will grow about three per cent this year, the most since the rebound from the Great Recession.

Now, imagine what that number might be if Canada, a “trading nation,” were actually trading as vigorously as it had in the past. “Exports, they have not been stellar,” Poloz conceded. One of the reasons they have been so weak is that we do business in too few places. Statistics Canada on Dec. 11 released the results of complex statistical analysis that shows “export diversification by market of destination is characterized by a high level of concentration.” In other words, Canada’s trade isn’t diversified: almost all of it takes place with the United States.

A country could do worse than latching itself to the world’s most voracious consumers; although, if a country were doing worse, it probably would have tried harder to find more places with which to trade. Canada could pay a price for a lack of ground work in Asia and Latin America in the years ahead. That’s because international business is about to become more difficult. The global trading system is becoming less fluid as Trump’s protectionism spreads to other countries. Ministers failed to agree on anything that would further facilitate global commerce at a World Trade Organization meeting in Buenos Aires this week; and Goldman Sachs, the investment bank that once employed several of Trump’s closest advisers, said earlier this month that it “looks more likely than not” that President Donald Trump will withdraw from the North American Free Trade Agreement in the new year.

“We are so trade dependent. Without a robust trading system, our standards of living would certainly be at risk,” Poloz said after his speech to the Canadian Club. Poloz had been asked by a member of the audience what he saw as the biggest threat to Canada’s economy over the next five years. “The most fundamental things will be around our relationship with the world, whether we operate in a free-trading system where growth is moving everybody together, or whether we become more fractured,” Poloz said.

Commerce follows the path of least resistance. If business owners could satisfy their ambitions by transacting with their neighbours, they would. Greed pushes them farther afield, but only to the extent that their tolerance for risk allows. That’s why the U.S. always will be Canada’s most important trading partner. It’s incumbent on governments to defy gravity by lowering the costs of branching out. Trade agreements help, as do agencies such as EDC. It also is useful if bigger, richer companies clear a path that their smaller domestic suppliers might follow.

Canada’s executives and entrepreneurs are rather meek, as capitalists go.

Tucked inside the most recent edition of Global Affairs Canada’s annual “State of Trade” report is an analysis of how many companies actually go through the trouble of selling stuff abroad. The number in 2016: 43,255, about 670 fewer than the previous year. Most of those companies employ fewer than 500 people, and two-thirds of them export only to the United States. But: 476 of those companies account for more than three-quarters of the value of all merchandise exports.

A relatively small number of large companies tend to dominate global commerce in every country. Still, André Downs, chief economist at Global Affairs, concludes that among the world’s richer economies, only Finland is more reliant on its 500 biggest exporters than Canada. “The top exporters make a disproportionately high contribution to exports for Canada compared to top exporters in other countries,” the report states. We are less a “trading nation,” and more a country of free-riders who benefit from the relatively small group of companies that seeks opportunity abroad.

This is why it is so important that Prime Minister Justin Trudeau’s pivot to Asia is successful—and why the hiccups in launching the Trans-Pacific Partnership and formal negotiations with China over a bilateral trade agreement are reasons for concern. Lavery said EDC’s research and experience suggest that it takes more than impressive economic growth rates to convince Canadian companies to try their luck overseas; they prefer countries of the OECD, a club of richer advanced economies, and places with which Canada has a free-trade agreement. EDC sees Australia as a route to the countries of the Association of Southeast Asian Nations (ASEAN), a promising collection of markets that includes Indonesia and Vietnam. Canadian exporters are treading water in that part of the world, even as ASEAN nations post some of the fastest growth rates on the planet. Here’s a graphical representation of an index I created to show the change in Canada’s market share in some of the bigger emerging markets: 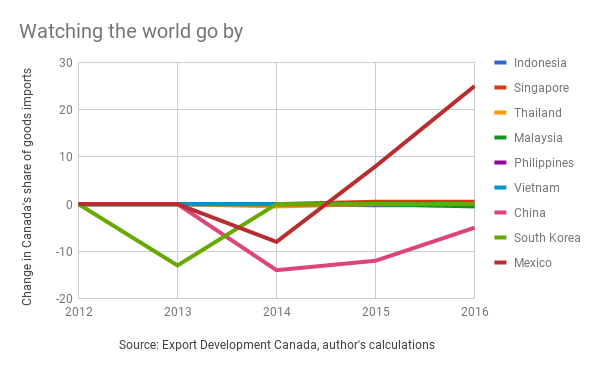 Canada’s need to play catch-up in Asia doesn’t mean Trudeau should accept any old trade deal he can get. But it must be part of the calculation in deciding the government’s trade policy. The Prime Minister appears determined that any new trade agreement involving Canada must protect the environment, promote labour rights and correct gender imbalances. Those are worthy goals, but it’s fair to ask whether trade negotiations are the place to pursue them. The risk is that Trudeau’s agenda falters, as it’s unclear that many countries are interested in negotiating on those terms. That would compromise Canada’s ability to maintain its current living standards.

Remember also: the federal government included in its 2017 budget a “clear and ambitious” target to increase experts of goods and services by 30 per cent by 2025. Recent history suggests there is little reason to expect Canadian companies will help achieve that goal unless Ottawa clears the path. Politicians like to throw around aggregate numbers that show Canadian exports to various emerging markets have grown impressively in recent years. But as the chart above shows, Canada is actually losing market share almost everywhere. The one place where Canada has gained some ground on others is Mexico, which some suggest Canada should sacrifice in order to get a deal with Trump in the NAFTA talks.

That would be a good idea only if you were fine with a future in which Canada is a client state. The U.S. always will matter most economically, but it shouldn’t be everything. It took a trade agreement to get Canadians interested in Mexico. Breaking into Asia in a meaningful way will require the same.