Central bankers and economists in rich countries are vexed by the comatose state of inflation. But if you stare hard enough at Canada’s latest price figures, you see a sign of life. A collection of inflation indicators favoured by the Bank of Canada continued to edge towards the central bank’s target in August, supporting its decision to raise interest rates this summer.

No need to get too excited, however; inflation is still a long way from becoming a major worry.

Why the inflation data matters

The Bank of Canada uses price data to help it decide where to set interest rates. The central bank’s mandate from the government is to keep annual inflation around two per cent—the bull’s eye of a target that ranges from one per cent to three per cent.

Easy, right? Not lately. When the economy heats up, prices should rise. But that hasn’t been happening. Canada posted off-the-charts economic growth of 4.5 per cent in the second quarter, yet the Consumer Price Index (CPI) rose only 1.4 per cent in August from a year earlier, Statistics Canada reported on Sept. 22.

For years, economists have relied on something called the “Phillips curve”, which measures the link between unemployment and inflation. Historically, there has been an inverse relationship: when one rate falls, the other rises, and vice versa. Lately, hiring in countries such as Canada and the United States has been strong, yet inflation has remained dormant. Canada’s jobless rate—6.2 per cent in August—is unusually low, but the CPI still is a long way from the Bank of Canada’s target.

Governor Stephen Poloz and other senior officials insist the country’s hot streak of economic growth will stoke price increases eventually. That’s why they raised interest rates in July and again earlier this month: they want to stay ahead of the curve.

The latest inflation data supports those moves. The CPI can mislead because it is influenced by changes in volatile items such gasoline and food. The Bank of Canada prefers a trio of inflation measures that adjust for that sort of volatility. The average of those indicators was 1.53 per cent in August, compared with 1.46 per cent the previous month. That’s a small change, but a sign of life. 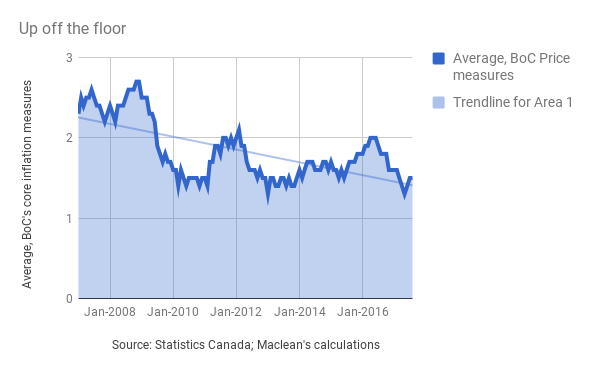 Canada’s economy might be entering a Goldilocks phase: not too hot, not too cold. Economic growth is cooling from the red-line pace of the second quarter: StatsCan reported this week that factory shipments declined in July, and that retail sales were little changed over June and July following a relatively torrid spring. But there is little reason to panic. With inflation tame, the Bank of Canada will feel comfortable taking a break from raising interest rates. Timothy Lane, a deputy governor, said on Sept. 18 in Saskatoon that the central bank would like to get a better sense of how its interest-rate increases affect household spending and the exchange rate. Mild inflation will allow policy makers to sit back and observe.

Some will argue that further evidence of weak inflation shows the Bank of Canada was wrong to raise interest rates. Given the scars of the Great Recession, and the blow dealt Canada by the collapse of oil prices, there is a case to be made that the central bank should have left its benchmark interest rate at 0.5 per cent at least until headline inflation hit the two-per-cent target. The CPI was heavily influenced by gasoline and shelter in August, life costs that suggest households will have less spare cash to spend elsewhere—especially after they’ve made their monthly payments on all that mortgage and credit-card debt.

Inflation in Canada is now lukewarm, rather than cool. That supports the Bank of Canada’s narrative that stronger-than-expected economic growth over the past year will eventually put upward pressure on prices. Policy makers would have been negligent if they ignored history and left borrowing costs at an emergency setting—the emergency is long over. But Canada’s economy isn’t totally healed. Wages are growing only about as fast as inflation, exports could be stronger, and household debt is a major vulnerability. The latest inflation data should comfort the central bank: officials have some evidence that the Phillips curve still works, yet they will be feeling no pressure to keep raising interest rates.