Why concerns over carbon pricing are misplaced

Most Canadians believe action should be taken on climate change, and of all the options available, carbon pricing comes with the lowest economic costs

John Williamson of Canadians for Affordable Energy argues forcefully in a recent Maclean’s piece that putting a price on carbon emissions will harm Canada’s economy and put our firms at a competitive disadvantage. He further argues that measures meant to address competitiveness concerns will come up short. He’s not alone. The points he raises are broadly held, but none undermine the case for either a carbon tax or a cap-and-trade system. Let me explain.

Will it raise business costs? Yes.

Will it lower exports abroad? Yes.

Are there ways to completely avoid all competitiveness concerns? No.

Does this imply carbon pricing is bad policy? No, not even close.

The economic cost of carbon pricing is likely minor. Modelling results from Canada’s EcoFiscal Commission suggests modest reductions in economic growth rates—on the order of hundredths of a percent, depending on details of design. (See Figure 6 of this.) The effect on costs, and therefore trade, are also (for the most part) minor. There are exceptions that I will describe below, but targeted measures can substantially mitigate these issues.

What’s missing from Williamson’s piece, and indeed from most arguments against carbon pricing, is consideration of the central question: Should we lower our greenhouse gas emissions at all? And if we should, then what policy tools should we use?

All action has costs. All action has winners and losers. And all action requires careful design to minimize, where possible, any adverse side-effects. To sensibly critique carbon pricing, we must be clear about whether we are objecting to the target (lower greenhouse gas emissions) or to the instrument (carbon taxes). If one objects to the instrument, but accepts the target, then one must propose an alternative instrument.

Let’s start with the target.

Most Canadians accept the evidence that climate change is real, that humans contribute to it, and that we should do something about it. That being said, it’s not irrational for one to disagree. It’s ultimately a moral question.

Lowering emissions has benefits (lower climate change damages) but comes at a cost (changing behaviour, adopting new technology, etc). Neither the benefits nor the costs are evenly distributed across individuals, sectors, or indeed across countries. To illustrate, recent research in the journal Nature estimates the effect of climate change on economies around the world. (An ungated version of the research is here, and an interactive summary of the results is here.)

The largest costs of climate change are disproportionately borne by poor countries, especially in Africa and South-Southeast Asia. But notice Canada may actually gain. If one is solely concerned with economic consequences for Canada alone, then one could rationally reject any measure to lower emissions. But imposing costs on others is hardly appealing.

One might also point out that due to Canada’s small size, our actions have negligible effect on the path of future climate change. But this neglects that our emissions impose costs on others at the margin. We can’t solve the world’s problem alone, but we do measurably contribute. (For more on this, see Joel Wood’s piece here.)

So, if one does want to lower emissions, the choice is not between a carbon price and nothing, but between a carbon price and regulations, technology subsidies, higher-cost renewable energy, or the long list of other tools. Personally, I prefer taking action that has the least economic cost. After all, why pay more than we need to? And generally speaking, that means putting a price on carbon. But it’s no panacea.

Measuring, and mitigating, the costs

Carbon pricing will raise firm costs. In the process of producing output, firms use energy, burn fuel, and emit greenhouse gases. The typical sector in Canada emits about 0.4 tonnes of greenhouse gases for each $1,000 produced—both directly and indirectly through the inputs they buy. Roughly speaking, a $50/t price on carbon will increase costs by roughly 2 per cent. Though not trivial, it’s far from the catastrophic outcome some might suppose. (This is also an overestimate, since not all emissions are priced.)

What about exports? The most recent data for 2013 reveals 307 million tonnes of emissions are embodied in products we export abroad—that’s over 40 per cent of our total emissions. The same $50/t spread over the nearly $480 billion in exports that year, suggests a 3.2 per cent cost increase. More than average, but again less than what many might suppose. 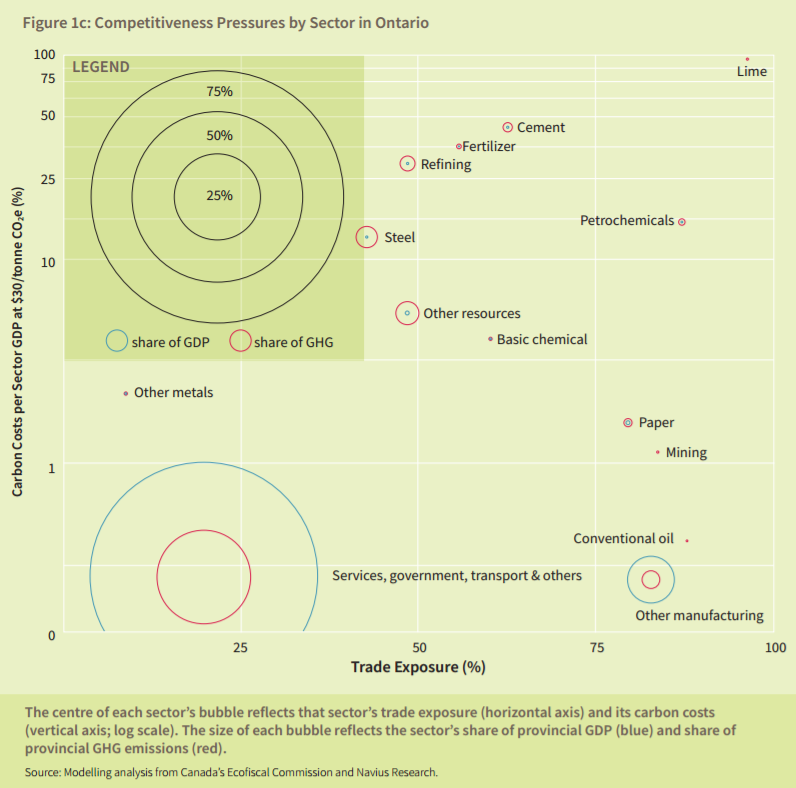 For those sectors in the top-right, carbon pricing may disproportionately raise costs and negatively affect their competitiveness. These are so-called “emissions intensive and trade exposed” sectors. For Canada as a whole, they account for only about 5 per cent of our GDP. So competitiveness concerns are narrow and concentrated. But for the few vulnerable sectors, targeted policies can help.

Consider a subsidy to output. If a sufficiently large subsidy is combined with carbon pricing, then overall average costs for a sector need not increase. Alberta’s approach will use this very tool, and it substantially lowers the cost of carbon pricing on oilsands facilities—in fact, the efficient facilities may come out ahead. Ontario and Quebec also provide free permit allocations to some within their cap-and-trade system. This is also like a subsidy to a firm’s output.

These are valid points, but none undermine the case for carbon pricing. They merely point to the importance of smart policy design. To combat the first concern, use clear, transparent, and uniform allocation formulas. To the second, if subsidies and allocations are too small, raise them. Finally, if one wants to help small and medium firms—which are, for the most part, excluded—change the rebate system. Instead of giving subsidies to big firms alone in the form of free allocations, provide subsidies to all. Perhaps through a refundable credit within the corporate income tax system, or payroll subsidies—as in one proposal for Rhode Island.

Competitiveness is about more than carbon pricing

All action has costs, and therefore all action raises competitiveness concerns. Requiring firms to adopt a particular technology or technique adds costs just as carbon pricing does. But such regulatory measures generate no revenue to help offset those higher costs. To rail against carbon pricing, when most Canadians want something done, is to open the door to more burdensome regulations and a worse competitive position for Canadian firms abroad.

To be sure, many governments continue to enact inefficient regulations that carbon prices make redundant. Many also spend carbon tax revenue, rather than recycling it through offsetting tax cuts elsewhere. But neither critique is a knock against pricing carbon itself, but instead with some other decision a government made.

Finally, we can’t talk about competitiveness without recognizing many policies affect it: corporate taxes, investment rules, labour laws, building codes, and so on. There are equally many ways to improve competitiveness: increase productivity, liberalize markets, improve labour mobility and work incentives, modernize the corporate tax system, drop investment restrictions, ease regulatory burdens, and so on. Instead of simply demanding we scrap carbon pricing, let’s talk about how we can design our policies well, and about the myriad of other ways in which we can boost Canada’s competitiveness without undermining our environmental goals.

Trevor Tombe is an Assistant Professor of Economics at the University of Calgary, and a Research Fellow at the School of Public Policy.