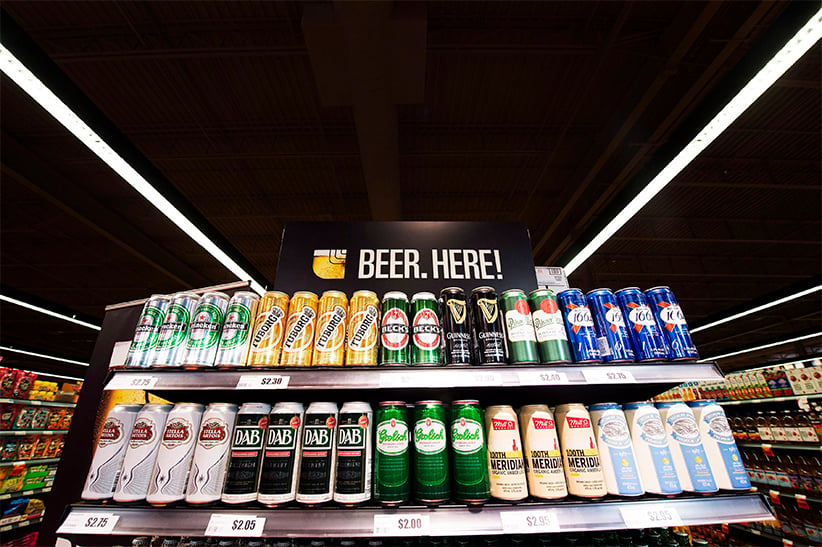 Beer is shown on shelves at a grocery store in Toronto. (Nathan Denette/CP)

Gary McMullen has been brewing beer for over 20 years. His story isn’t so different from hundreds of other craft brewers: it began as a hobby, probably in his basement or garage, and grew, with the help of a close friend, to what Ontarians know today as Muskoka Brewery—Ontarians, because Canadians outside of Ontario have likely never heard of this brand.

“There’s 10, 11 jurisdictions you need to deal with if you want to be a national brand in Canada,” he says, “and you move south into the United States, you go into New York state, and find the same number of people essentially.” Which is what the brewery has done. Muskoka brew is now selling on a pilot base south of the border, and McMullen said so far, it’s been successful.

Every year, Muskoka brews upwards of 50,000 hectolitres of beer—that’s over 8.3 million pints. But less than four per cent of that is sold outside of Ontario’s borders—a number McMullen says could increase if the company was able to move more seamlessly across provincial borders. Standing in his way are thousands upon thousands of complex rules and regulations that vary from province to province to territory.

University of Calgary economist Trevor Tombe says it’s impossible to approach this problem with an itemized list that you tackle one at a time. “It needs to be approached in a system-wide way; in a macro way,” he says.

In 2015, Tombe co-authored a study that looked at how much money Canada is losing in gross domestic product by having these internal trade barriers, and found it could be anywhere between $50 billion and $130 billion—a number cited in a report released by the Senate earlier this month. The report, “Tear Down These Walls,” makes a case for mutual recognition between provinces, saying the artificial walls that exist are an affront to the fundamental rights of Canadians. The Senate is giving the feds until Canada’s birthday, July 1, 2017, to reach an agreement with the provincial and territorial governments, and if that doesn’t happen, will refer the case to the Supreme Court.

But in that time, Tombe asks, “How many small businesses are prevented from growing their operations because of these internal trade costs?”

MORE: Why barriers to trade between the provinces leave us all poorer

Last year, Muskoka pulled its products out of B.C., Alberta, and Saskatchewan, after the New West Partnership Trade Agreement raised the taxes on out-of-province brewers, making it unaffordable for the Ontario-based company to keep up its delivery out west. That agreement is cited in the Senate report as a possible model to base a renewed Agreement on Internal Trade on.

Despite living a few thousand kilometres apart, McMullen’s struggles aren’t so different from Alley Kat Brewing Company’s Neil Herbst. Alley Kat, an Edmonton-based brand, has been operating since 1994, and Herbst says Alberta has been great to him. But trying to grow within Canada, outside provincial lines, has been impossible, and it’s not for lack of trying.

“The issue has been essentially listings,” he says, adding that getting into the U.S. was a matter of meeting label requirements and registering the brewery—something that took him a day to work out.

Herbst is for the NWPTA, because if he can’t sell his product in Ontario, why should an Ontario company be able to sell its product in Alberta? “B.C. is as big of a problem as Ontario,” he says, despite B.C. being part of the NWPTA. “They control listings as well, but you’ll see tons and tons and tons of B.C. beer in Alberta.”

Like McMullen, Herbst’s wildly successful hobby-turned-career has been capped.

“I just find it bizarre that we have a country that limits trade across provincial borders,” Herbst says. “It’s not even really a country, it’s a bunch of little fiefdoms.”

Beer is an easy good to focus this discussion around, because it’s beer, and everyone (over the legal drinking age) loves beer. But if you want to deregulate the provincial trade of beer, you also have to deregulate finance, energy, carbon emission standards, labour—the list goes on.

At the beginning of June, Okanagan-area MP Dan Albas launched a “Free the Beer” campaign in response to a groundbreaking court ruling in New Brunswick. Gerard Comeau was charged in 2012 after police caught him bringing 14 cases of beer and three bottles of liquor into New Brunswick from a Quebec border town. This spring, a judge threw out his charges, saying the ban on cross-border transport was unconstitutional. The Province of New Brunswick has appealed that decision, but Albas would like to see it go one step further. Earlier this week he tabled a motion calling for the federal government to bypass the Provincial Appeals Court and refer Comeau’s case to the Supreme Court. His motion was shot down.

In May, Canada’s minister of economic development applauded the New Brunswick judge’s decision. But on Tuesday, Navdeep Bains said that while he agrees internal trade needs to improve, Albas’ plan threatens the work being done with provincial and territorial governments. “Imagine this scenario,” he said. “I am at the table working with my counterparts and then we launch this through the courts. What kind of signal does that send? We are working in good faith.”