Why the NDP's exact plan for the corporate tax rate matters

If Mulcair keeps his promises on the budget and the corporate tax rate, it's unclear how an NDP government could avoid spending cuts 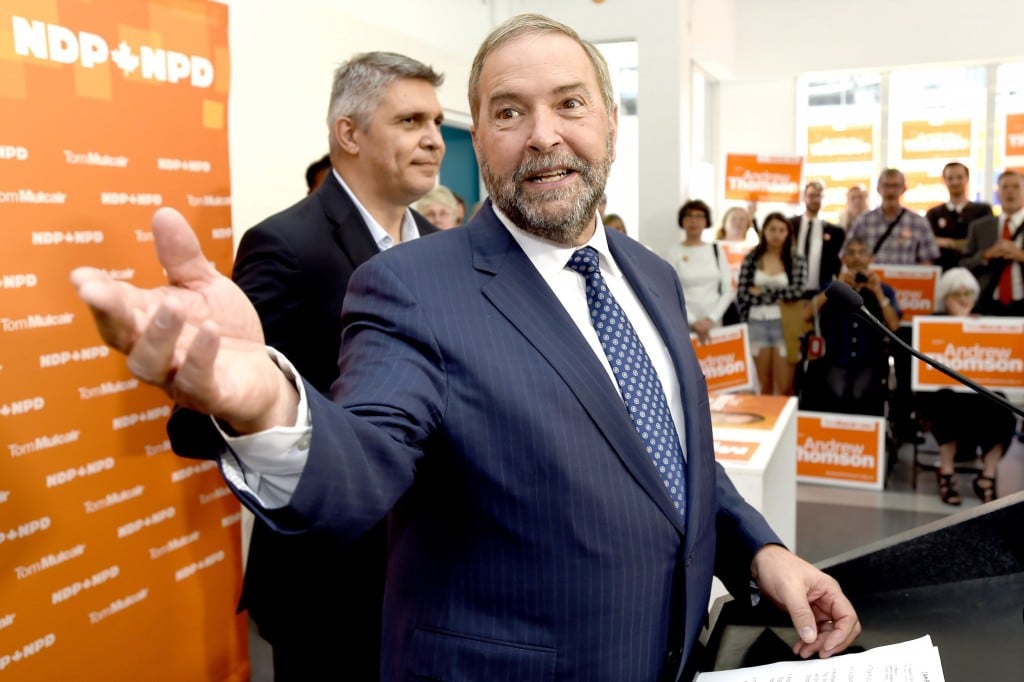 NDP Leader Tom Mulcair speaks to supporters along with candidate Andrew Thomson, left, during a campaign stop in Toronto on Thursday, August 27, 2015. THE CANADIAN PRESS/Frank Gunn

Given the NDP’s current position in the polls and the importance of corporate tax increases in its economic platform, I don’t think this story got as much attention as it should have. (No, not just because it quotes me.)

The NDP leader has not yet spelled out precisely how high he would boost the federal corporate tax rate, which currently stands at 15 per cent.

But Mulcair earlier this month said he would impose “a slight and graduated increase” that would still be “far below the average that the Conservatives had for the 10 years that they’ve been in power.”

The average rate under Stephen Harper’s government is 17.5 per cent. If Mulcair really intends to stay “far below” that, he’s looking at something like a one percentage point increase—maybe two, if one stretches the definition of “far below.” And he’s now saying even that small hike would be phased in over a number of years.

This is a considerable climbdown from what Mulcair was saying two years ago:

“We will get back to something resembling the American combined rate in Canada, which would indeed constitute an increase in corporate taxes.”

To put that in context, the OECD says that the current combined (that is, federal plus state/provincial) corporate income tax rate in the US is 39 per cent. In Canada, it’s 26.3 per cent (the federal rate of 15 per cent plus an average provincial rate of 11.3 per cent.) Getting us up to something resembling the U.S. rate (in the absence of changes in provincial rates) would require increasing the federal rate to around 27 per cent.

The NDP has made use of several different reference points since then. For example, rolling back the cuts made under the Conservative government would bring the rate back up to 22 per cent. Increasing the federal rate to 19 per cent would bring us up to the average of the other G7 countries. The NDP’s target is apparently now down to 17 per cent or so.

In the short and medium term, the second point is probably more important.

I’ve gone through the exercise of estimating how much tax revenues could be expected to be generated from an increase in corporate income taxes a couple of times (here and here). Here I’m going to update those numbers, and focus attention on the sort of increases the NDP is currently considering.

One answer is “nothing”: this is the “static analysis” case. Under this scenario, increasing the rate by one percentage point would increase revenues by one per cent of the original tax base. Here, that works out to $2.6 billion for each percentage point.

But nobody believes that when corporate tax rates increase, corporations will react by gritting their teeth and carrying on as before. The empirical evidence suggests pretty strongly that firms will in fact adjust their behaviour to minimize their tax liabilities.

There are two recent empirical studies that I think are most relevant for the case at hand. One is by Bev Dahlby and Ergete Ferede, published in International Tax and Public Finance, and the other is by Aleksandra Riedl and Silvia Rocha-Akis, published in the Canadian Journal of Economics. The Dalhly-Ferede study uses Canadian data, while Riedl and Rocha-Akis do a cross-country analysis of OECD countries.

Dahlby and Ferede offer two sets of results, and I’ll use both. I’m going to call them the “weak” and “strong” cases, because one set of estimates yields a stronger response.

The weak case is based on a model that looks like this:

The strong case has the same form, but with a slightly different set of controls:

The inclusion of the previous year’s tax base captures the dynamics of the response to the tax change. Firms will adjust gradually over time, and not all at once.

Riedl and Rocha-Akis’s results have a slightly different form:

If the original tax base is $263 billion and if nothing else changes—the assumption you have to make in assessing the effects of a policy—then this information is enough to put some numbers on the sort of revenues you can expect to generate by an increase in corporate tax revenues. I’ve worked through four cases: the static (no response) case, both Dahlby-Ferede cases and the Riedl and Rocha-Akis case.

Here’s what might be expected from increasing corporate taxes by one percentage point: 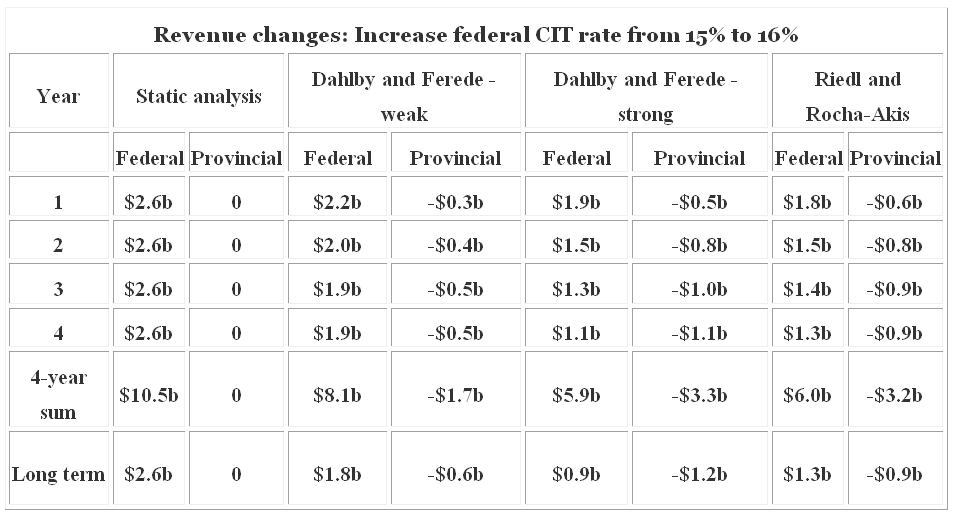 And here’s the case of a two-percentage-point increase: 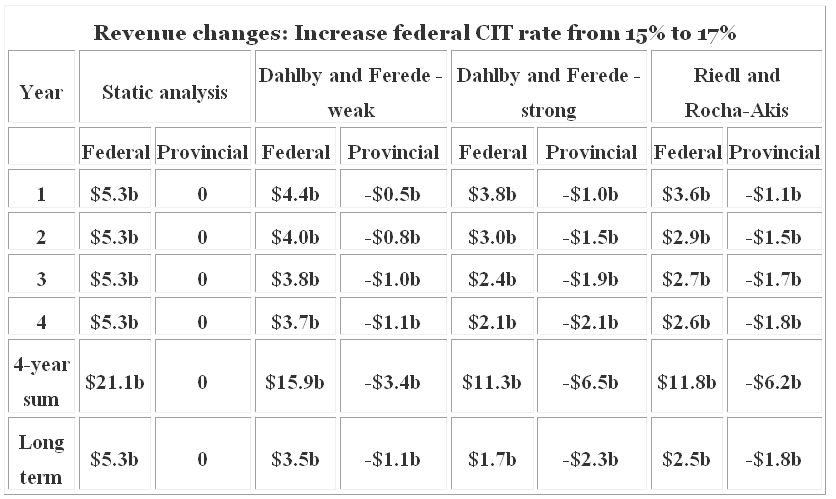 These estimates aren’t all that much different than what it looks like the NDP had in mind back in June:

Erin Weir, a labour economist running for the NDP in Saskatchewan, has estimated that each percentage point increase in the corporate tax rate would generate about $1.5 billion in revenue each year.

That $1.5 billion estimate is pretty much in the middle of the range of estimates in that first table.

If the NDP is scaling down its plans to a one- or two-percentage-point increase, then it’s not clear how an NDP government could avoid the spending cuts that are built into the current budget projection, much less finance new spending. Nor is it clear how—or if—a federal NDP government would compensate the provinces for their lost corporate tax revenues.

I’ve made the point before that the projected surpluses in the 2015 budget were based on continued restraint in direct program spending (this excludes transfer payments to individuals and provinces, and includes salaries paid to public sector workers). Even if the next government cancelled all the tax cuts and spending measures in the 2015 budget, it still wouldn’t be enough to obviate the need to make further cuts in the public service.

It’s also worth noting that those projected surpluses were also based on revenue forecasts that seem unlikely to be met.

Mulcair has pledged to balance the budget, come what may. In order to do that, it’s unlikely that an NDP government will be able to fulfill many—or even any—of its spending promises.