Will consumers respond to a carbon tax?

Alberta’s carbon tax is slated to be introduced at the start of the new year, as is Ontario’s cap-and-trade system. Quebec and British Columbia already impose charges on the carbon content of fuels (see figure below, produced by University of Calgary economist Trevor Tombe). As a result of the recently concluded pan-Canadian climate framework, other provinces will soon follow. Much discussion has focused around what the tax means for individual families, in terms of changes in overall expenses. Less discussion has focused on how much the tax is likely to actually change behaviour, and whether it will reduce fossil fuel consumption and carbon dioxide emissions. 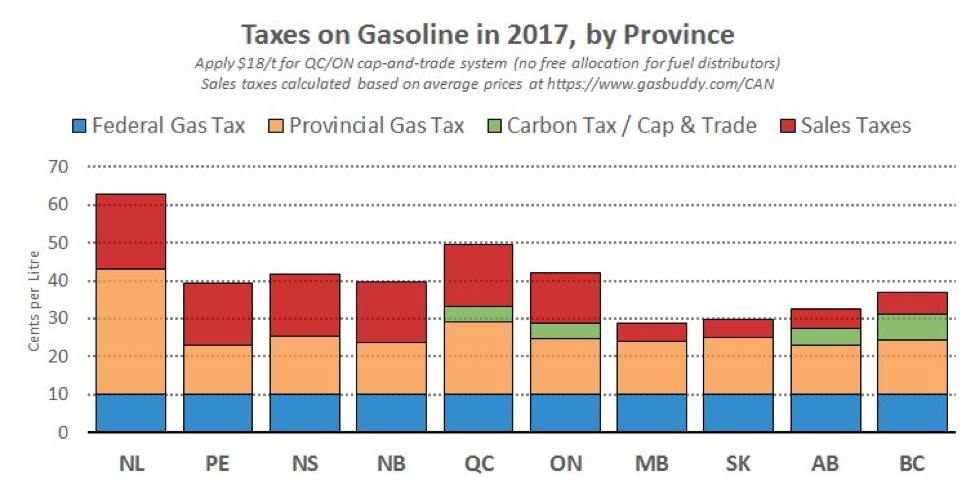 In particular, many Canadians are skeptical about whether changes in carbon taxes will cause them to change their consumption. In a Toronto Star article from last year, Joseph Heath summarizes the concern well:

Since the government of Alberta announced its intention to implement a carbon tax, there has been a sudden burst of skepticism, of commentators claiming that carbon pricing schemes are ineffective. Critics from both right and left—from Margaret Wente to Naomi Klein—have claimed that the incentives provided by a carbon price are too weak to constitute an effective response to a problem as extensive and as severe as global climate change.

In this note, I take a different approach with the intention of being more transparent. Rather than use a statistical approach to relate ongoing changes in prices with changes in demand, I look at a particular case study.  On June 2 of this year, the province of Newfoundland and Labrador increased its excise tax on gasoline from 16.5 c/L to 33 c/L as part of a series of budgetary changes designed to address the serious deficit facing the province.

Changes to the gasoline excise tax are relatively uncommon. Changes to the excise tax of this magnitude are unprecedented (or nearly so). Although the dire fiscal situation and sudden tax change likely came as an unpleasant surprise to many Newfoundlanders, it has the benefit of providing a useful case study to understand the impact of changes in taxes on fossil fuels in a relatively transparent fashion.

The figure below shows the impact of the excise tax change on the consumer price of gasoline. I compare the price of regular unleaded gasoline in St. John’s with prices in two other markets: Halifax and Toronto. The effect of the excise tax on the pump price is clear (and consistent with the evidence that provincial and state gasoline taxes are passed through to the final consumer). 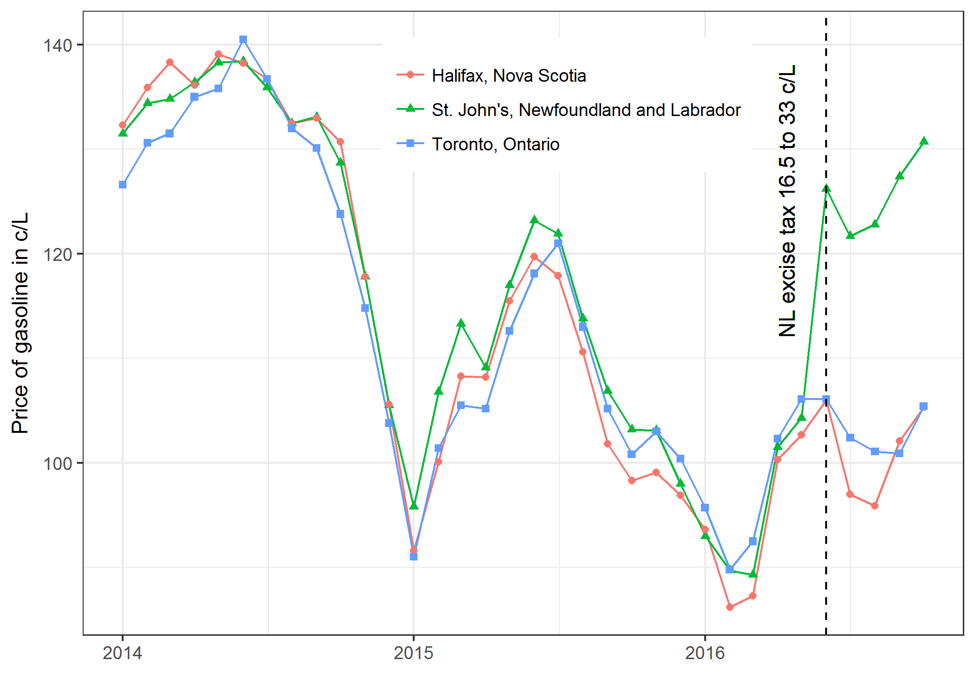 So, did the change in gasoline prices in Newfoundland affect demand for gasoline in the province? Unfortunately, data on gasoline sales in Canadian provinces are not current and contain many missing data points for the province of Newfoundland and Labrador. However, Statistics Canada collects data on retail sales (i.e., revenue) from gasoline stations that can be used to provide some insight into how the change in excise tax affected consumer behaviour in Newfoundland.

In the figure below, I normalize (i.e., divide) sales at gasoline stations with all retail sales. This helps to account for the dramatic changes in the Newfoundland economy that are occurring during the current year. Until the gasoline excise tax was introduced, this index moved almost identically in Newfoundland and the rest of the country.  However, a clear diversion is evident when the tax is imposed.  What does this tell us about the consumer response to changes in gasoline taxes? 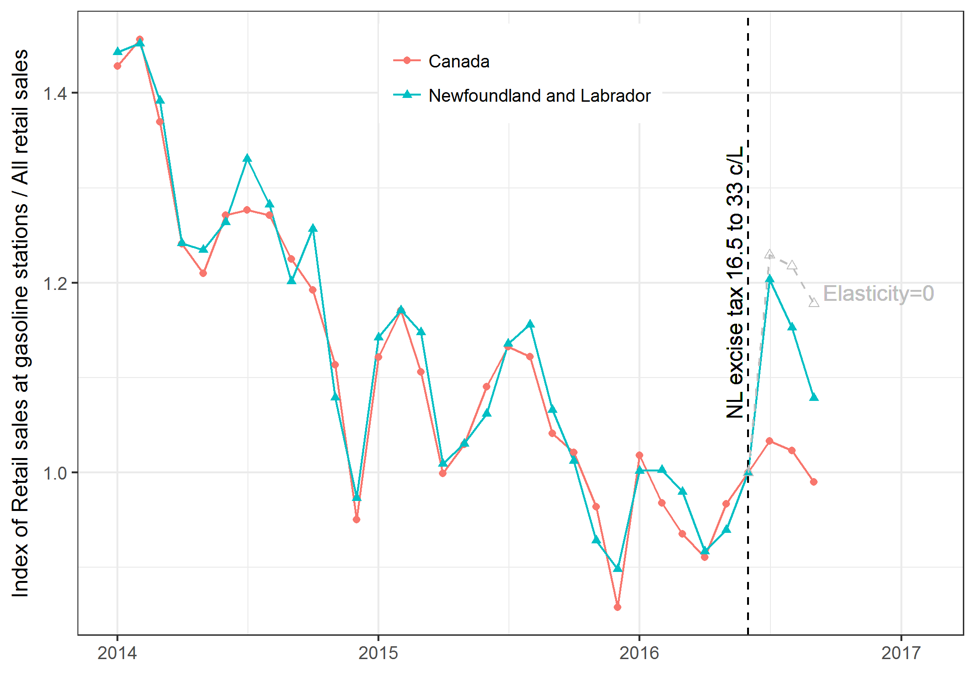 After moving in lock-step with the rest of the country over prior years, revenue from gasoline stations in Newfoundland increased by 17 per cent relative to the rest of Canada in the month following the tax increase, by 13 per cent two months following the price change, and by nine per cent three months after the price change. The excise tax reflected approximately a 19 per cent increase in the gasoline price.* If consumer demand were perfectly inelastic (in other words, if consumers did not respond at all to the increase in price by reducing demand), revenue from gasoline stations in Newfoundland would have increased by the same amount as prices increased—this is indicated by the grey line in the figure.**

Instead, revenue increased by a smaller amount.  If revenue increased by a smaller amount than the price increase, then demand must have decreased. The difference between the change in price and the change in revenue reflects consumer response to the gasoline price increase. More precisely, the data suggest that gasoline sales in Newfoundland dropped off by about two per cent in the month following the tax relative to where they would have been without the tax, by about six per cent two months after the tax, and by about 10 per cent three months after the tax’s introduction.  These results can be seen in the figure below.

These figures suggest an elasticity of demand after three months of about 0.5—in other words, consumers appear to have responded to the increase in gasoline prices in Newfoundland by reducing their demand. The reduction is on the high side of what we would expect from prior studies, but not dramatically so. 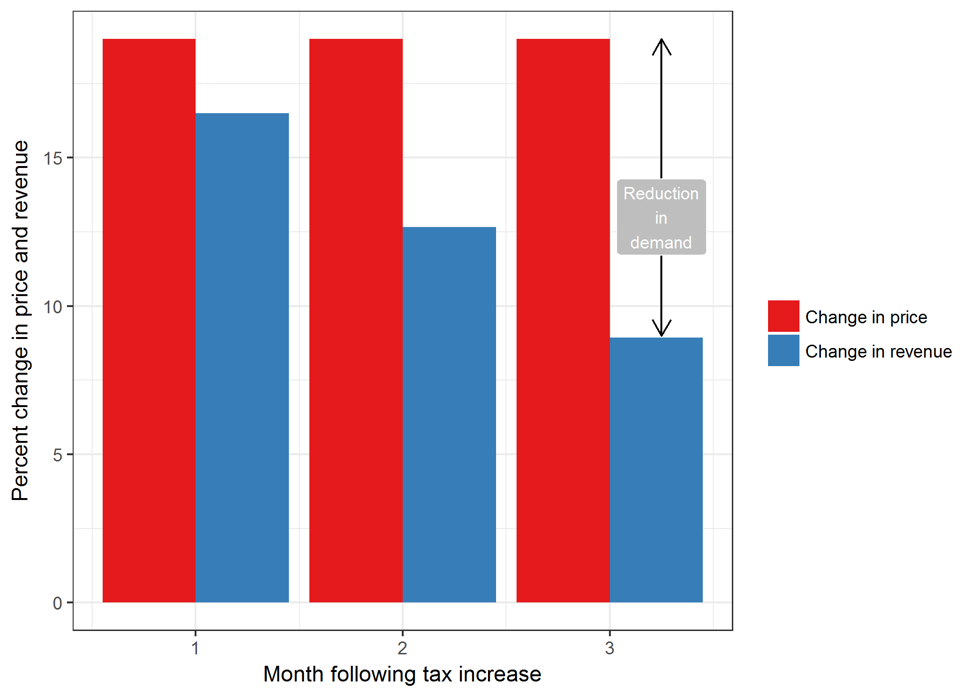 Unlike a gasoline excise tax, a carbon tax will increase relative prices for natural gas, diesel, coal, and other fossil fuels, in addition to those for gasoline.  Evidence here and in many other studies suggests that consumers and firms will respond to changes in all these prices when carbon prices will increase. This is good news for Canadian governments’ price-focused approach to reducing greenhouse gas emissions.

Nicholas Rivers is an associate professor at the University of Ottawa’s graduate school of international and public affairs. Follow him on Twitter at @riversNic.