A weaker currency may help boost exports, but it means domestic prices, like what you pay at the pumps, will rise

For much of 2012 and 2013, there was collective hand-wringing over the value of the Canadian dollar and the potential impacts of a high dollar on export industries. Since then, likely for a variety of reasons beyond the scope of this post, the Canadian dollar has depreciated significantly.  That’s good news for exporters, since all else equal, they will receive a higher value for their products.  Of course, this doesn’t just affect manufacturers, it affects resource companies as well—over the coming weeks, as companies report their quarterly results, you’ll likely see significant increases in revenue for all of our export-oriented sectors.

So, that’s the good news? What about the bad news?  As the great hand-wringing went on, several economists (myself included) tried to warn Canadians that this increased value for exports would come at a cost—higher domestic prices for traded goods and, as a result, lower real wages (i.e. earnings adjusted for inflation) for Canadians.  We’re starting to see that now, with gasoline prices.

Gasoline is a globally traded commodity, so the price of gasoline we pay reflects its value on world markets (that holds for commodities which we import or which we export, plus or minus transportation costs), and the value of gasoline tends to track world oil prices.  As gasoline prices have climbed in Canada over the past couple of months, a lot of people have been looking at world oil prices and not seeing them climb very much.  In fact, over the past 12 months, a quick check of the data shown below reveals that the opposite is true, once you take the relevant currency into account.  While oil prices in US dollar terms increased by 6 per cent from the same time period last year, in Canadian dollar terms they increased by 14 per cent.  Over the past three full months, the dynamics are similar—oil prices in US dollar terms have dropped by 3 per cent, but have increased by 2 per cent in Canadian dollar terms. 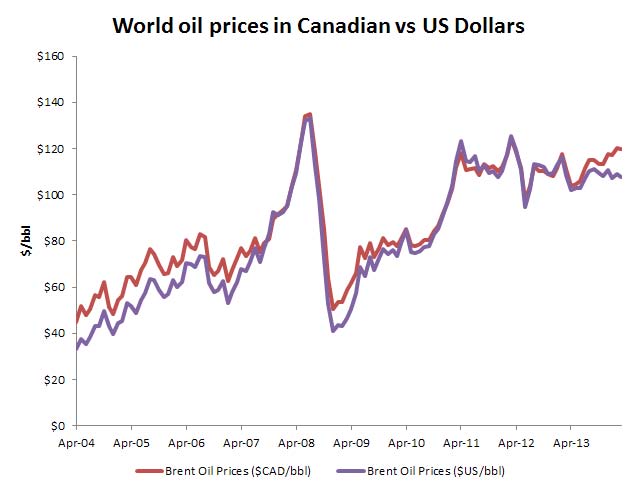 So, how has that translated into gasoline prices?  Using  weekly data over a shorter time horizon, we can compare the price of gasoline in Toronto with the prices of two relevant commodities – the global oil price show above, and the New York Harbour spot price for gasoline (RBOB, for those of you wanting the details). Just like world crude oil prices, the average gasoline price in Toronto was higher in April 2014 than in April 2013, but only by 8 per cent compared to 14 per cent for crude and 15 per cent for NY Harbour gasoline when you price everything in Canadian dollars. The retail price of gasoline in Toronto has seen a significant up-tick over the past 12 weeks, where prices at the pump have jumped 9.6 per cent.   However, this is almost entirely explained by the world price of gasoline, which has jumped 9.4 per cent over the same time period.  Crude has increased as well, but not as much at only 2 per cent over the same 12 week period. 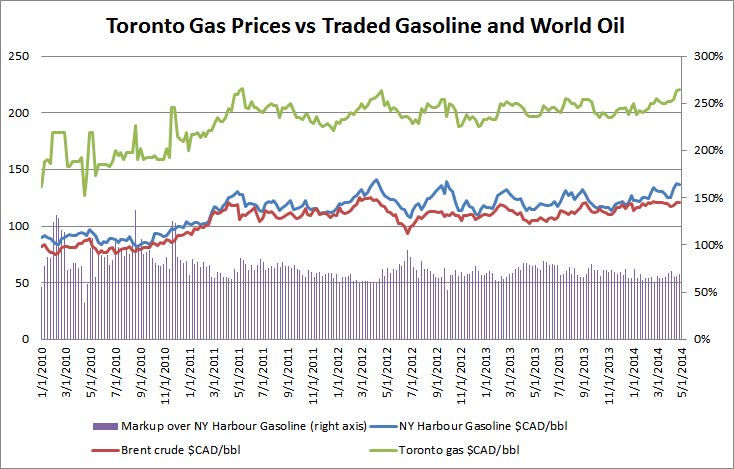 Gasoline prices have increased in the Toronto market year-over-year at a rate well-above inflation, and a lot of that increase has come in the last 8-12 weeks. Where they have  increased, however, it has been in line with the price of crude oil and more importantly the price of global trade in gasoline when everything is priced in Canadian dollar terms.  For Canadians, the upshot is simple—if you are wishing for higher prices for exports, you’re wishing for higher domestic prices as well, and that means your dollars won’t go as far.