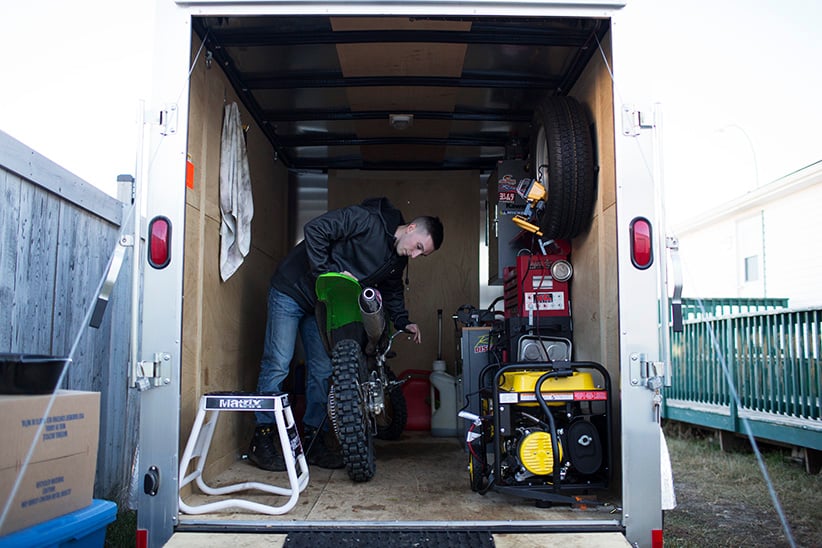 Brandon MacKay works on this motorbike in his trailer turned into a make shift garage, in Fort McMurray Alberta, November 14, 2015. (Photograph by Jason Franson)

This week Statistics Canada released a rather technical report on wages, interprovincial mobility and employment. The un-technical upshot: young, unmarried men moving around the country during the oil boom played a significant role filling job vacancies in Alberta’s oil sector and thereby lowering the unemployment rate in other provinces.

That may have seemed obvious from anecdotal evidence, but in fact StatsCan’s study is the first to take a close look at one demographic—unmarried men under the age of 35—and calculate the economic impact of their movements in search of higher wages. “The estimated increase in the migration of young men induced by changes in the regional earnings structure represent 12 per cent to 24 per cent of the job vacancies observed in Alberta during [2001 to 2008],” the study concludes. If they hadn’t been drawn to Western Canada by the excitement of the oil patch during its glory days, the country as a whole would have experienced substantially greater variation in wage rates, unemployment and economic unpleasantness. It might be the first good press that young, unattached men have had in a long time.

Regardless of their role in the Canadian economy, young men are typically regarded with a mixture of abject fear and dismissive indifference. Unmarried men, we’re constantly reminded, present a danger to themselves and everyone else because of their predisposition for thrill-seeking, crime and worse. “Generally speaking, the people who go out and kill other people are males between the ages of 16 and 30,” Samuel Huntington, author of The Clash of Civilizations, said in a 2001 interview. Drunk driving, sexual assault, Internet porn, drug use, riots. All manner of social ills are laid at the feet of young men sans épouse. That terrorist organizations such as Islamic State are fuelled by radicalized males adds to the sense of dread and foreboding. But should such observations become a licence to discriminate? While society frets about fairness and inclusivity for nearly every identifiable group and segment, young men appear to languish without advocates, government support or even the slightest degree of public concern.

Consider the federal government’s plan to exclude, as far as practicable, unaccompanied males from the pool of Syrian refugees accepted into Canada. While Ottawa claims it has no explicit policy ruling out young men, it has deliberately prioritized families, women, children and sexual minorities ahead of them. So there’s simply no room for single males. It strikes a discomforting note to see refugees weeded out in such an obvious way, particularly when young, employable men are the demographic most likely to be of immediate benefit to the Canadian economy.

The same dynamic—hostility combined with indifference—runs through the Trudeau government’s decision to launch a federal inquiry into missing and murdered Indigenous (and predominantly young) women. In appreciating the scope of this tragedy, we should remember the homicide rate for Indigenous women is 3.6 per 100,000 population. The homicide rate for Indigenous men is 10.8 per 100,000. With a murder rate three times that of women, where’s the public concern and/or inquiry into murdered young Indigenous men?

Another apparently pressing issue of our time is gender imbalance in science, technology, engineering and math programs at Canadian universities. Nationwide, male university graduates outnumber females more than 2:1 in math and computer science. The ratio in engineering is even higher. This is widely seen as unfair to young women—and hence something must be done about it. Prime Minister Justin Trudeau announced last month, for example, he’s become an official advocate for the University of Waterloo’s HeForShe campaign that devotes considerable energy and scholarship money to convincing more girls to pursue engineering degrees at Canada’s premier high-tech university. Similar programs are in place elsewhere around the country.

Certainly any systemic issues preventing girls from studying math-intensive subjects ought to be eliminated, but obsessive focus on male-to-female ratios in computing and engineering overlooks a broader gender imbalance afflicting the entirety of Canadian campuses. Women now make up 58 per cent of all university graduates. They constitute a significant majority in nearly every degree program other than math, computers and engineering. Across Canada, 75 per cent of all education and health degrees are earned by women. Two-thirds of all degrees in the social and behavioural sciences and law are earned by women. At the University of Waterloo—centre of so much concern over gender ratios—72 per cent of degrees granted by its optometry school are to women. With the importance of higher education universally recognized as being crucial to success in a modern, global economy, where’s the concern over the disappearance of young men on campus?