Eurozone deflation is finally here (you knew it was coming)

Today’s big story is not falling oil prices, but the mass shooting at French satirical newspaper Charlie Hebdo yesterday, during which 12 people were killed.

The shooting has had surprisingly little influence on world markets so far – the Sydney hostage-taking last month rattled markets – with indexes up around the world. This despite official confirmation that the eurozone has a deflation problem. More indications for the U.S. Federal Treasury that a rate hike isn’t expected for the next few months seem to be reassuring investors – for now.

Today, the new housing price index will be released in Canada, and tomorrow is a big day for economic data in North America: housing starts will be out, as well as jobs numbers for both Canada and the U.S.

Europe is officially seeing deflation. It hasn’t been a good week for the eurozone in general, but new economic data yesterday shows that a long-term flirtation with falling prices has turned into an outright romance. The year-on-year decrease in prices is now at 0.2 per cent, ramping up the pressure on the European Central Bank and Mario Draghi to push more stimulus, including large-scale bond buying (quantitative easing), which has been used by both the U.K. and the U.S.
It’s worth remembering that across the 19 members the picture is very mixed. When it comes to employment, records are being made on both sides: Italy’s unemployment rate has just hit a record high since records have been kept (starting in 1977), at 13. 4 per cent. That’s more than twice Germany’s current rate – 6.5 per cent – the country’s lowest employment rate in two decades.

No rate hikes from the Fed – until at least April. Minutes from the meeting of the U.S. Federal Treasury, the country’s central bank, came out yesterday, giving more clues to rate-watchers on when historically low interest rates will begin to increase. The notes revealed that the Fed does not plan to announce hikes in the first two meetings of 2015 – which means the earliest rates could begin to rise is after April.

Other revelations include dampened concern over what the impact of a strong dollar will be on the American economy and the Fed’s belief that low oil prices will be a net benefit for the U.S. – but that the biggest risk to growth are international factors, of which there are many, from eurozone deflation to a Chinese slowdown. Markets in New York all made gains on the news of the hold-off on hikes, and the TSX/S&P Composite also closed with a gain – albeit only by around 30 points, nowhere near enough to erase the battering earlier this week. European and Asian markets are also generally up this morning.

Canada’s trade deficit is down, and new housing numbers are out today. Oil prices were behind falling Canadian exports in November, according to data from Statistics Canada yesterday, while a decrease in imports was widespread across several sectors.
From October, Canada’s merchandise trade deficit nearly doubled to $644 million in November, as exports slumped 3.5 per cent, while imports were down by 2.7 per cent. Trade with the U.S. decreased in November, while the drop in exports with other countries was largely the result of less trade with the U.K.
Today, Stats Canada will release the new housing price index for November – and analysts will be watching the prices closely, after the Bank of Canada governor said prices could be overvalued by as much as 30 per cent.

Ukraine is in trouble. The International Monetary Fund is in the country today to talk about the next round of funds to support the beleaguered economy. Bonds have dropped to record lows and a Financial Times data analysis says Ukraine’s debt is worse than expected: with their debt-to-GDP ratio expected to be more than double the 2013 rate by the end of this year. The IMF now says that the country’s economy contracted by an estimated 6.5 per cent last year, but that may be optimistic. Ukraine has so far received $4.6 billion of a $17-billion aid package, but the money is dependent on the government’s support for reforms.

Your morning chart. Charts are the bread and butter of economic journalism, but this morning calls for a slightly different take. This chart comes via Scott Bateman at Quartz. 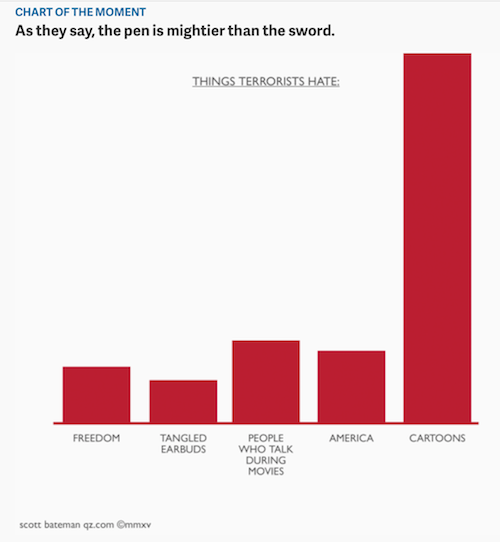