Excited for Tesla's Model 3? You should be—you're paying for it

Subsidies will play a huge part in the success of electric vehicles like the new Tesla Model 3. That's not necessarily a bad thing. 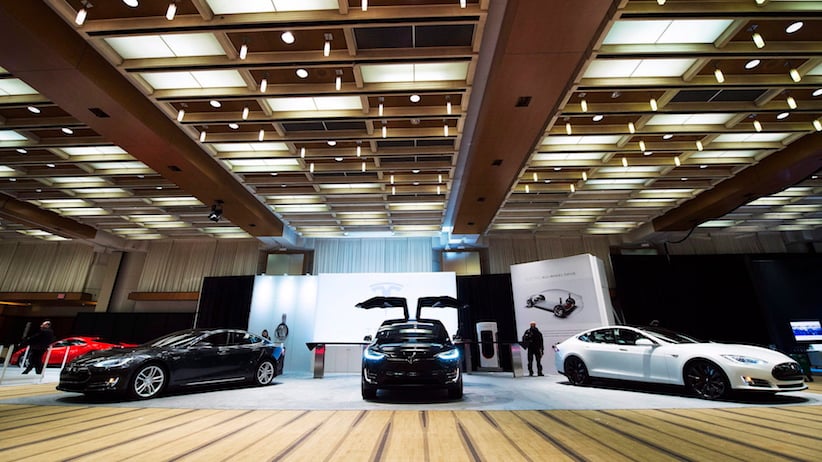 Tesla vehicles are shown at the 2016 Canadian International Autoshow in Toronto on Thursday, February 11, 2016. THE CANADIAN PRESS/Nathan Denette

Bold styling. Roomy interior. Sporty handling. All are well-worn car company clichés to describe a shiny new vehicle. But when was the last time you heard an auto executive call a car “profound?” Elon Musk’s assessment of Tesla’s new Model 3 sedan, to be officially unveiled Thursday evening, hints at how much the electric carmaker has riding on its first truly mass market vehicle, priced around US$35,000—about half the cost of previous efforts, the sleek Model S and crossover Model X.

Yet, for every person lined up outside a Tesla store in Canada Thursday morning, eager to reserve a Model 3 that won’t even be available until late 2017, there are untold numbers of Canadian taxpayers who will be chipping in, through government incentives, to help make their electric dreams—and Musk’s—a reality.

Canada’s three most populous provinces, comprising about three-quarters of Canada’s population, all offer rich incentives to consumers who purchase an all-electric vehicle like Tesla’s Model 3 or a plug-in hybrid like the Chevrolet Volt. In B.C., consumers are eligible for up to $5,000 in incentives. In Quebec, it’s as much as $8,000. Drivers in Ontario who purchase an electric vehicle with a battery capacity larger than 16 kWh and five or more seats are in line to receive as much as $14,000 from the province. There are also rebates in Ontario and Quebec for installing charging infrastructure at people’s homes.

Even Ottawa is getting in on the action. This year’s budget earmarked $62.5 million over two years to support the deployment of charging stations for electric vehicles and natural gas and hydrogen fuelling stations. “Early action is needed to support the transition to low-carbon transportation fuels, as vehicle choices made today will determine the mix of technologies on the road in 2030,” the government said.

Such subsidies are generally justified as necessary to offset the higher price of electric vehicles—particularly their giant lithium-ion batteries, which can account for as much as a third of the cost—and even the playing field when it comes to critical infrastructure. But it’s not yet clear if the strategy is working. Despite several years of consumer incentives, electric vehicles still account for a puny percentage of vehicles driven off dealers’ lots—less than half of one per cent of the nearly 1.9 million cars, trucks and SUVs sold in Canada last year. “EVs are failing miserably and subsidies and EV charging infrastructure is not the solution,” says Dennis DesRosiers, the president of Richmond Hill, Ont.-based DesRosiers Automotive Consultants.

Some argue the problem with consumer subsidies is they disproportionately benefit a small group of wealthy, environmentally minded people, who are among the most likely to shell out for a pricey electric car in the first place. That’s certainly been the case with Tesla. Musk’s business model was predicated on initially chasing rich CEO-types who were looking for an expensive toy, like Tesla’s US$108,000 roadster, and then gradually moving down market with a US$70,000 luxury sedan and US$80,000 crossover, although a US$144,000  “Signature” version of the latter is also available. (By contrast, Nissan initially targeted economy buyers with the Leaf, which starts at around $33,000 in Canada, while Chevrolet’s plug-in hybrid Volt starts at around $40,000). But while it’s true that a $5,000 incentive on an $80,000 car only means the difference between a standard interior and one with “Nappa leather armrests” and “lighted” door handles, the same can’t easily be said for the Model 3, where such subsides will amount to as much as a fifth of the sticker price.

As for whether we should be incentivizing EV sales at all, Anton Ovchinnikov, an associate professor at the Smith School of Business at Queen’s University, argues such policies can be justified both from a climate change perspective and one of overall economic fairness. Drivers of conventionally powered vehicles, he says, have effectively received a taxpayer subsidy for decades by not paying for what comes out of their tailpipes, which is bad for the environment and people’s health. “When I’m driving an electric vehicle,” Ovchinnikov says, “You’re not smelling the exhaust.”

There is, however, an important caveat. A working paper published last year by the U.S. National Bureau of Economic Research that found considerable variation across the United States when it came to the environmental benefits of driving an electric vehicle, depending on where the electricity it uses comes from. In states like California, with access to cleaner forms of juice and relatively dense populations, electric cars offer a clear benefit. But the study found they can have a negative effect in sparsely populated states like North Dakota, where commutes are longer and vehicle emissions are less worrisome than those of coal-fired power plants. The study’s authors conclude the considerable regional variation makes America’s $7,500 national tax credit for buying an electric vehicle (in addition to individual state incentives) a potentially poor policy choice—at least for the time being.

Ovchinnikov, for one, argues that’s why Canada’s current approach should be embraced. The three provinces currently offering EV incentives also happen to be home to the country’s most densely populated cities and relatively clean electricity grids. “What we’re really talking about here are three major metro areas”—Toronto, Montreal and Vancouver— “that are [suitable] for electric vehicle development.”