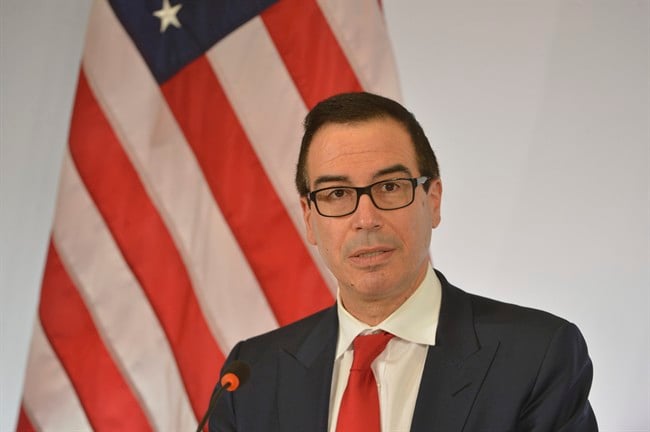 BADEN-BADEN, Germany – The world’s top economic powers have dropped a pledge to fully oppose trade protectionism amid pushback from the U.S. government of President Donald Trump, who wants to favour American companies and workers more.

Finance ministers at a Group of 20 meeting in Germany issued a statement Saturday that said only that countries “are working to strengthen the contribution of trade” to their economies.

By comparison, last year’s meeting called on them to resist “all forms” of protectionism, which can include border tariffs and rules that favour a country’s businesses over those in another economy.

OPINION: The next big federal election agenda item has been set: Trump and trade

The statement by the G-20, which brings together the world’s top economic and diplomatic powers, is important as it helps set the tone for global economic policy.

U.S. Treasury Secretary Steven Mnuchin sought to downplay the divisions, saying that the language opposing protectionism was “not really relevant” any longer.

Trump and other critics of free trade argue that it can cause jobs, such as in the labour intensive manufacturing sector, to move to lower-cost countries. Proponents say technological advances, such as automation, are more to blame for the loss of jobs in such sectors.

Trump, who campaigned on an “America First” platform, has already pulled the U.S. out of a proposed free trade deal with Japan and other Pacific Rim countries. He also has started the process to renegotiate the North American Free Trade Agreement with Mexico and Canada.

Wolfgang Schaeuble, the finance minister of host country Germany, suggested Saturday that the two days of talks at the G-20 had been somewhat rocky.

“Maybe one or the other important member state needs to get a sense of how international co-operation works,” he told reporters, without mentioning a country by name.

He argued, however, that it was not true that the officials had not found some common ground.

“It’s completely clear we are not for protectionism. But it wasn’t clear what one or another meant by that,” he said.

During the meeting, European countries and China were said to be pushing for a stronger stance in favour of free trade and co-operative, multi-country frameworks for trade such as the World Trade Organization.

Chinese Finance Minister Xiao Jie said his country would “unswervingly oppose trade protectionism.” Canada, like China a major trade partner of the U.S., took a nuanced approach, with Finance Minister Bill Morneau said to support a general statement on the importance of trade for growth – while not insisting on particular language.

The G-20 is an informal forum on economic co-operation made up of 19 countries plus the European Union. The finance ministers’ meeting will pave the way for a summit of national leaders in Hamburg, Germany, on July 7-8. Its decisions don’t have the same force as an international treaty but simply depend on individual countries’ promises to follow through on them.

Christopher Bodeen in Beijing and Frank Jordans in Berlin contributed to this report.