Happy that Alberta's oil-fuelled party is over? Think again.

Jen Gerson: In a system where every major project is a target for obstruction and protest, everyone suffers 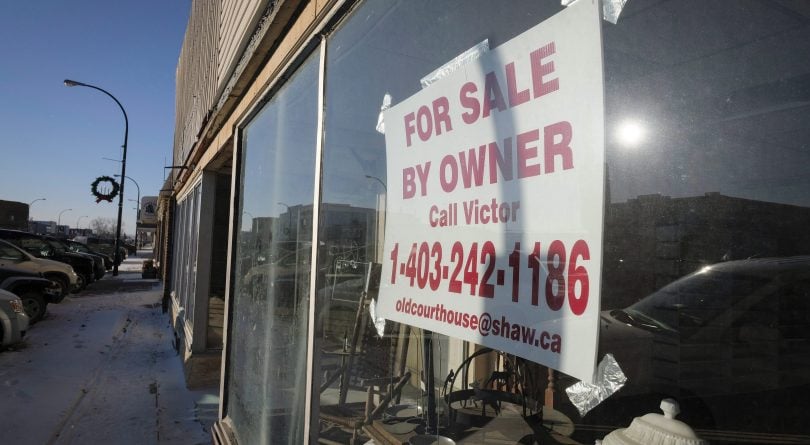 A vacant store for sale on the main street in Hanna, Alta. after the oil bust (Jeff McIntosh/CP)

My mother was in Calgary a few weeks ago to visit, and to look for a condo so she could spend more time with her astonishingly beautiful grandchildren. She had her pick of places. Cheap, too. Condos that were listed for $50, $60, $70,000 less than what they had been purchased for only three or four years ago.

My mother was keen, but before she made an offer, she called a former colleague in the oil and gas sector who specialized in real estate.

His advice: “Wait for Teck.”

The $20-billion Teck Frontier mine in northern Alberta was always a longshot for actual development; the project needs more pipelines, more investors, and a higher price of oil to be economically feasible. But the oil and gas sector had put enormous symbolic value on its approval by the Trudeau government.

It had everything going for it; a comparatively clean project with support from nearby First Nations communities. If Teck couldn’t get approved, nothing can get approved.

And if nothing can get approved, then the party is over in Alberta.

RELATED: On the Teck Frontier mine: stumbling in the shifting sands

Pity the poor man or woman who is about to lose $100,000 on his or her first house purchase to my mother’s opportunism—another example of intergenerational wealth transfer. Replicate that loss across a few hundred thousand households, and you start to get a feel for the problem.

Earlier this week, Teck Resources Limited—a company that mines coal—withdrew its application for its Frontier project, an oil sands mine that was to be situated in northeastern Alberta. The letter it sent to accompany the news was a masterclass in communications; an elegant example in how to make the most out of cutting your losses.

Frontier “has surfaced a broader debate over climate change and Canada’s role in addressing it. It is our hope that withdrawing from the process will allow Canadians to shift to a larger and more positive discussion about the path forward. Ultimately, that should take place without a looming regulatory deadline,” the letter read.

This is a Rorschach test, allowing the reader to place the blame for the withdrawal on his or her preferred villain. Teck gets to look like the reasonable adult in a room full of bickering, partisan children—all for a project that was not viable anyway.

Some blame can be directed, here, toward Alberta Premier Jason Kenney, whose bellicosity around climate change, oil sands divestment campaigns, “foreign-funded” environmentalists and carbon taxes painted a black hat on the province and its leading industry.

“Global capital markets are changing rapidly and investors and customers are increasingly looking for jurisdiction to have a framework in place that reconciles resource development and climate change, in order to produce the cleanest possible products. This does not yet exist here,” the letter noted.

RELATED: Jason Kenney needs to drum up a new reputation for the oil and gas sector

The withdrawal also spared the Prime Minister the terrible inconvenience of approving a project that would have further tarnished his environmental bona fides. An approval grew even more difficult in the midst of the Wet’suwet’en protests over the Coastal GasLink pipeline, which have led to solidarity blockades of ports, roads and critical rail lines across the country.

This despite the fact that all of the elected First Nations band councils have signed benefit agreements with Coastal GasLink.

That, obviously, no longer matters. As long as some fraction of a community with legitimate standing can object to a major project—be it a pipeline, a mine or a dam—that project now risks becoming a target of major protests.

In territories bereft of a treaty, where there is any uncertainty about governance structures or jurisdiction—as there is in Wet’suwet’en’s case—consent is clearly impossible. In practice,  this means investors would be mad to propose a major project in disputed territory.

And when #Wetsuweten stops trending on Twitter, the media, the protesters, and the environmentalists supporting the hereditary chiefs and land defenders objecting to the line will move on, oblivious to the economic, social and political damage they’ve left behind in pursuit of a more perfect, petrochemical-free world. And, trust me, they—we—will move on. We always, always move on.

Ironically, those elected bands and the people of Alberta now find themselves in a parallel political limbo. 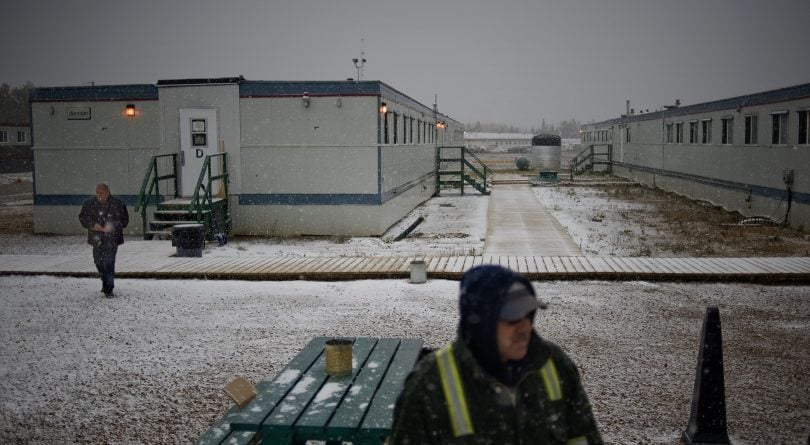 The review of major projects was once a comparatively dry, largely technocratic matter, complicated by questions of Aboriginal title and consultation spelled out in an evolving set of Canadian laws. Companies were presented with a set of criteria, and a selection of experts was tasked with weighing the potential environmental impacts against the economic benefits to the company, the community, and the nation as a whole.

That began to change under Stephen Harper’s government, who reduced the power of the regulatory technocrats and added more politics to the process. That politicization was further formalized in the recent passage of Bill C-69.

Regulatory approval is now implacably political, which ensures it will also become the object of leverage.

This was rather missed at the time, but back in January, when Teck was still pending, federal Environment Minister Jonathan Wilkinson said that the project’s approval would hinge on whether or not Alberta would help the country meet the Liberals’ half-baked election pledge to ensure net-zero emissions by 2050.

He also slyly noted that Alberta was continuing with its inconvenient challenge to the federal government’s carbon tax in court—a challenge Alberta just won in a 4-1 decision at the Alberta Court of Appeal.

The problem with this should be obvious. If it is not, please allow me to spell it out bluntly: if you abuse process to shaft your opponents when you are in power, they will shaft you twice as hard when you are out of it.

RELATED: ‘Alberta has been cheated’: Wexit supporters on what drives them

Imagine a future Conservative government in Ottawa, telling a Liberal Quebec: “Nice hydroelectric dam proposal there, shame about your position on our cuts in health funding. Maybe you want to tone that down a bit [wink]?”

Do you think a future Conservative government would fail to delight in such a prospect? Where have you been?

Everyone will be hurt by this.

Likewise, if Teck was the bellwether indicator that triggers broader disinvestment in the oil and gas sector, the country will feel it.

I spoke by phone to University of Calgary economist Trevor Tombe and he did some back-of-the-napkin math on what all of this could mean for the rest of Canada. To put it in context, the oil and gas sector in Alberta generates roughly $100 billion per year in revenue, which is equivalent to roughly one-third of the province’s GDP. It accounts for about 100,000 jobs. A dollop of federal government largesse is not going to make up the gap.

The median household income has declined in Alberta by roughly six points since the oil crash began. In a progressive tax system, declines in high-income provinces, like Alberta, disproportionately dent tax revenues.

Has anyone in Ottawa done the math on what happens if median household incomes fall another six points? Another 10?

Tombe provided some quick and dirty context: He estimated that if Alberta had not suffered a recession, the federal deficit would have been $13 billion smaller in 2019.

Total capital investment in Alberta in 2014 was about $98 billion—that’s an astonishing amount, considering the total capital spending in Canada amounts to about $250 billion. In 2019, spending in Alberta had fallen below $59.7 billion.

Here’s another fun fact: since the recession began, Alberta lost about 90,000 jobs—that’s 10 SNC head offices, for those keeping track out East. More than half of those laid off were people who did not live in Alberta. They were workers from other provinces, who paid taxes to those provinces.

There’s no happy transition away from oil, here. There’s just decline. So have fun with your $.75 Canadian dollar while you can. Maybe put your Amazon.ca wishlist orders in today. Because if this gets really bad, we could witness one of the most significant wealth sinks this country has seen in a generation, and that’s before we get into the political unrest that will certainly follow.

And if you shoot yourself in the foot, don’t be surprised when you struggle to walk.

The more wealth we sacrifice as a nation, the less capacity we will have to address any number of issues, including Indigenous reconciliation and climate change. We will have less money to invest in disaster relief and mitigation, and less cash to develop the technologies that reduce emissions.

Climate change is an opportunity for a wealthy, educated country. Canada ought to be creating the technologies and processes the world will need. That’s not the path we’re choosing.

Lastly, I cannot imagine a government more vulnerable to the crises this country faces than this Liberal one. Justin Trudeau and his party built their political brands around fine words about the environment and reconciliation. This government constantly tries to tie the gap between the ideal and the possible with a gossamer of symbolic gestures.

This takes the form of land acknowledgements from a settler class that will never give up the land it lives on. An “ongoing genocide” promptly forgotten the moment the words are said. A commitment to zero emissions after purchasing the Trans Mountain pipeline. Encouraging patience for protesters blockading railways, and then backtracking four days later.

This fixes nothing and pleases no one. The government has ceded the moral authority to govern to people who literally want to #shutdowncanada.

They’re getting their wish. It’s not going to be the utopia they’re hoping for.