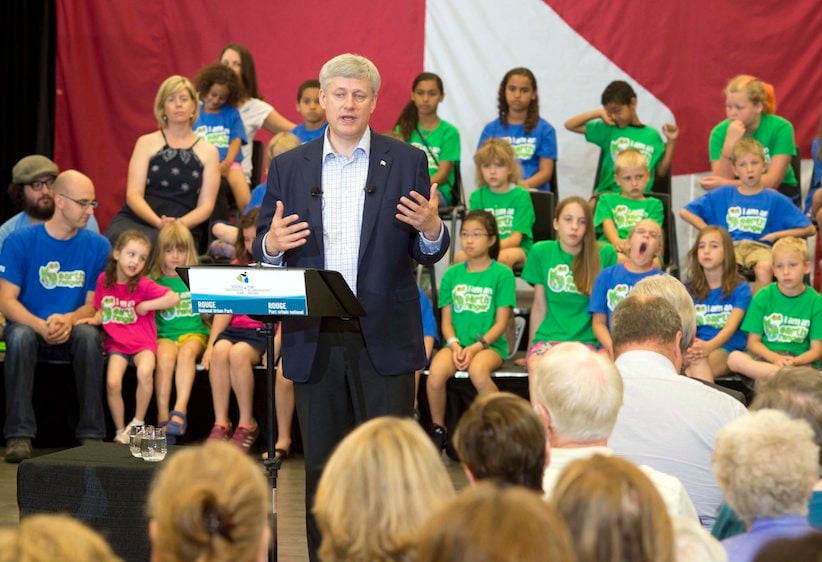 Prime Minister Stephen Harper says the government will react with “strong fiscal discipline” to the “downturn” in the Canadian economy, which he blamed on the recent turmoil in the global economy.

“Let me just state clearly what the situation is, there has been a downturn and the reason for that has been the downturn in the global economy,” Harper said in Pickering, Ont.

“It’s really that simple. Look around the world, we have another crisis downturn in Europe, we have a very significant slowdown and some other related economic problems now in China, we had very negative first quarter growth in the United States.

“So those things have obviously affected this country and in particular through oil prices and some commodity prices.”

Harper added that the federal government will not “spiral ourselves into deficit” and face credit downgrades, create an “investment freeze” by hiking taxes on businesses or take away tax breaks to Canadian families.

“Those are things we don’t do,” he said. “What we are doing, is providing strong fiscal discipline with lower taxes and we will have very large scale investment going into the Canadian economy this month alone through the increased universal childcare benefits.”

Harper said that the outlook for the Canadian economy is favourable for the rest of the year, just days after Finance Minister Joe Oliver said it was too early to tell whether Canada has slumped into a recession.

“Every expert in the world thinks that this country is going to grow as the year goes on and has some of the best growth prospects looking forward,” Harper said.

“As long as we stay on a plan for low taxes, balanced budget and low debt, this country is going to continue growing.”

Concerns that the country has fallen into a recession have grown since Statistics Canada figures released last week showed that the economy contracted in April, marking the fourth straight monthly decline. The next round of GDP figures come out July 31.

“The numbers aren’t out yet,” Oliver said Tuesday in Vancouver. “When the numbers are out we’ll see what they have to say.”

Oliver’s comments marked a shift in his position. He rejected the possibility a week ago Friday when the Bank of America Merrill Lynch suggesting Canada was in a recession.

On Monday, TD Bank added its voice to the growing chorus of economists warning that the country was likely in a recession through the first half of the year, largely because of the continuing fallout of low oil prices.

That, coupled with Statistics Canada saying Tuesday the country’s trade deficit grew to $3.34 billion in May—worse than the $2.5 billion deficit economists had expected—have painted an economic picture that gets increasingly bleak.

Despite the sluggish economic performance, Oliver said he remains confident that Canada would end the fiscal year with a $1.4 billion surplus as promised in the budget.

Harper’s remarks came Saturday during an announcement where he promised to double the federal government’s initial contribution to the Rouge National Urban Park just east of Toronto.

The government announced its intention to create the park—the first urban national park in Canada—in 2011. Legislation creating the park was passed in the House of Commons this past January and it received royal assent in April.