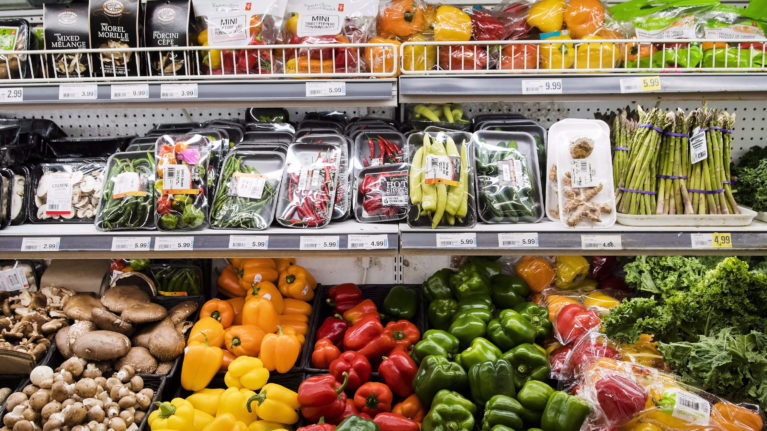 COVID-19 has upended Canada’s food supply chains. Plants have shut down, grocery stores are struggling to keep their shelves stocked, and farmers have had to grapple with both labour shortages and produce gluts. As a result food prices are already rising.

On Tuesday Prime Minister Justin Trudeau announced the latest coronavirus aid package, this one aimed at the agri-food sector, including $77 million for food processors to keep workers safe, $125 million to help cattle and hog producers and $50 million on a surplus food purchasing program.

Scott Biddle is someone with a unique perspective on Canada’s food supply, as the owner of Scotlynn Group, a large farm producer and food trucking company in Vittoria, Ont., southwest of Hamilton, Ont. near the shore of Lake Erie. Scotlynn runs its own fleet of 350 trucks and manages 2,000 more, carrying food products from Canada to the U.S. and bringing produce back to Ontario. It also operates farms on both sides of the border, including one of Canada’s largest asparagus farms as well as producing sweet corn, watermelons and pumpkins.

Maclean’s spoke to Biddle about the problems COVID-19 has caused to Canada’s interconnected food system. The interview has been edited for length.

Q: Where are you seeing the biggest disruption to Canada’s food supply chain?

A: We transport a lot of southbound freight from Canadian businesses to produce regions in the U.S. and use those trucks to bring produce back into Canada. But now you have plants here that have slowed down or temporarily shut down their facilities, so we’re having to pay for a lot of equipment to run empty trucks to a lot of these U.S. locations to bring food back into Ontario. That obviously costs more and it’s putting the price of produce up.

A: It really depends on the product and how much is on the truck. But it could cost anywhere from $3,000 to $5,000 a load more in costs just to get the empty trucks to the produce regions. It essentially costs the consumer more money because peppers are going to sell for $5 versus $2.50 or whatever it is.

Q: Can you give me an example of what that disruption looks like?

A: You have the Ferrero Rocher plant [which makes Nutella and other products in Brantford, Ont]. They’ve temporarily closed their facilities. Meat plants have closed or slowed down. Ice cream, anything perishable, anything food related, that’s what we haul. A lot of that has slowed down or stopped. But we still need to send the trucks to California, Florida, Washington, New Jersey, and bring produce back.

Q: What about on the farming side of your business. What’s the situation been like there?

A: We’ve struggled bringing offshore labour in with the restrictions and the extra restrictions put in place by the local health department. [The federal government has mandated temporary foreign workers must remain in self-isolation for two weeks while the Haldimand-Norfolk Health Unit has also said no more than three self-isolating workers can occupy a single bunkhouse, some of which are designed to house dozens.]

We normally bring in 242 guys. We’ve been able to get in 207 of our men from Mexico so far, and on Saturday we got 130 of them out of quarantine to start. Our first crop is asparagus. We should have enough men on the farm to get things started. But we’ve hard to turn to a lot of local labour and students to keep things on track to get crops planted.

A: We’re fortunate, we come from a small town farming community with a lot of students who are used to working on farms and have great work ethic, so we’ve been able to recruit enough who now don’t have other jobs.

Q: What did you have to do to keep workers self-isolated?

A: Given the three men per house restriction we’ve turned to local motels and hotels. We’ve rented three entire hotels to put our men in. We’ve got security, and hired restaurants to make  their three meals plus snacks a day. The cost is north of over a half a million dollars just to quarantine our labour and the cost of food. The costs are significant, but we need those men, so not having them here is not an option for us.

Q: The government has provided some relief, is that helping?

A: The government has come in with a subsidy of $1,500 per man, which is going to help offset a little over half of those costs, but the other half is going to go back into the product, so that product is going to have to sell for more.

Q: How much more?

A: The price increases won’t be that dramatic. You might be talking $2 on a case of 48 cobs of corn. A watermelon might go up by 50 cents or 75 cents. The costs right now for transporting produce into Ontario with no southbound freight, that’s definitely where the higher costs are coming from.