How NAFTA looks from Mexico City

On the ground in Mexico City's massive Central de Abasto marketplace, people care more about Trump than they do NAFTA 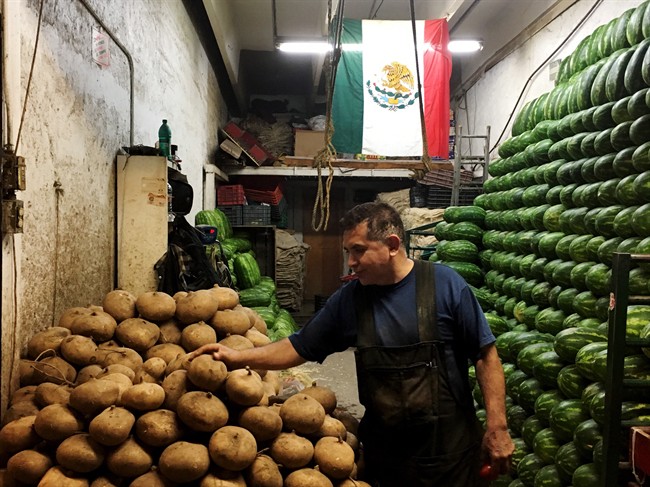 Jorge Guzman tends to his stall in Mexico City’s Central de Abasto, claimed to be the world’s largest outdoor market with 500,000 daily visitors, on Monday, Sept. 4, 2017. Central de Abasto’s inhabitants carry a diversity of opinions on the burning economic question of the moment: what to do with NAFTA. Free trade has created winners and losers here. THE CANADIAN PRESS/Alex Panetta

MEXICO CITY – In the middle of Mexico City, there’s an outdoor market so massive you’d need a helicopter to witness its entirety: 90,000 employees, 62,000 daily truck deliveries, supplying 35 per cent of the country’s fruits and vegetables, and 500,000 declared daily visitors rivalling the population of central Vancouver, Hamilton, and Quebec City.

It’s a bustling labyrinth with walls of watermelon, rolling hills of corn, and enough avocado to garnish breakfast toast for every hipster on the continent, all stocked by 10,000 fast-moving trolley-carriers zooming past produce that bursts with every colour of the culinary rainbow.

Central de Abasto claims to be the world’s largest wholesale market. It’s so big it carries its own sociological problems, with a criminal underworld reportedly operating a variety of rackets from its shadows.

And like any society, its inhabitants carry a diversity of opinions on the burning economic question of the moment: what to do with NAFTA. Free trade has created winners and losers here.

Avocado is on such a winning streak one merchant feels invincible in the face of Donald Trump. Rene Torres says a case of avocados that sold for as little as $13 a few years ago now costs $97.

Avocado sales to the U.S. practically doubled over a four-year period following the Great Recession, and the country is now sending in more than 20 million pounds of avocado a week.

“If (America) wants them, we’ll sell them. If not, no problem. It will continue, and it will go on elsewhere,” Torres said in an interview in his stall.

“The whole world wants Mexican avocados…. Europe. The United Arab Emirates. Japan. China. All of them did lots of good for Mexico — it’s created a boom.” 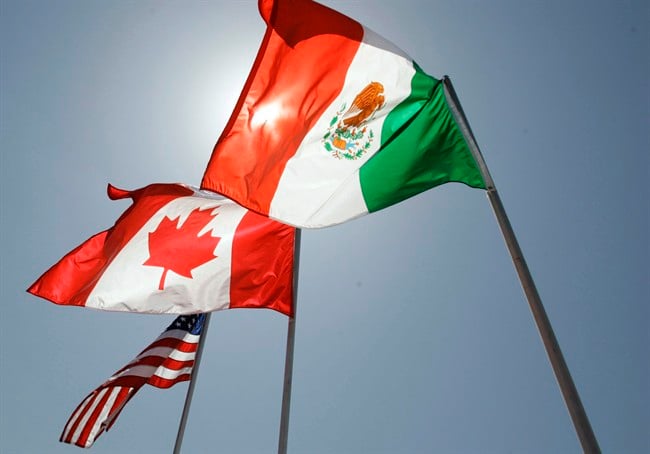 Mexico supplies more than 95 per cent of the chili pepper imported by the U.S. and the quantity has grown steadily over time. Standing astride boxes of red, green and yellow peppers, Oscar Moherano says he’s worried about what the end of NAFTA would mean to his market.

“The product would drop,” he said. “We’d be producing here with no other place to sell it.”

But these successes don’t tell the full NAFTA story. In fact, for agriculture, it’s been mostly negative. While salaries have gone up in industrial sectors like auto production, traditional farmers have been steamrolled by American competitors.

Margarita Rodriguez Lopez runs an association of farmers at the market. She says specialty products like avocados and papayas have thrived under NAFTA, but there have been sad stories in other sectors.

“Yes there are sectors that have lost. Vegetables, in general,” she said.

The poster child for these setbacks is corn. Under NAFTA, corn imports have gone up almost 10 times, and myriad Mexican communities have suffered as they’ve been out-competed by American producers.

“(Corn) production has dropped,” she said. “(So) we have different points of view (on NAFTA)… But we believe we produce products of extremely high quality… There are doors open to other countries. China, South America… Canada.”

There’s one thing everyone appears to agree on: they hate the U.S. president. Many Mexicans interviewed this week said they want their government to stand up to him. Rodriguez says she’s glad it’s promised to walk away from any abusive demands.

But ask people here about relations with the U.S., and NAFTA is rarely the first thing they mention. The front-page story of the Reforma newspaper wasn’t about the trade talks starting this week in Mexico City, but faraway news of Trump’s plan to lift protections for those in the U.S. lacking legal status who arrived as children.

“(Trump) has obvious racist beliefs that have affected our national relations a lot,” she said.

“But this racism issue is really leaving a mark.”

Standing beneath a wall of watermelons, Jorge Guzman says economic uncertainty scares him. But he’s also offended by certain values being expressed up north.

“Mr. Trump, we respect him, but we don’t like him. Because he hates people. We don’t hate people. We love people,” Guzman said.

“We believe that people have got the same rights all over the world. The people who hate are bad people… (Trump) doesn’t love. He doesn’t care about human rights.”

“Prices are low,” says a man calling himself Oscar.

A friend next to him says of NAFTA: “It hasn’t helped.”