How soon can Donald Trump hit Canada with car tariffs?

He has a few hoops to jump through first. But if he goes ahead, Trump will tear a gaping hole in the Canada-U.S. trading relationship 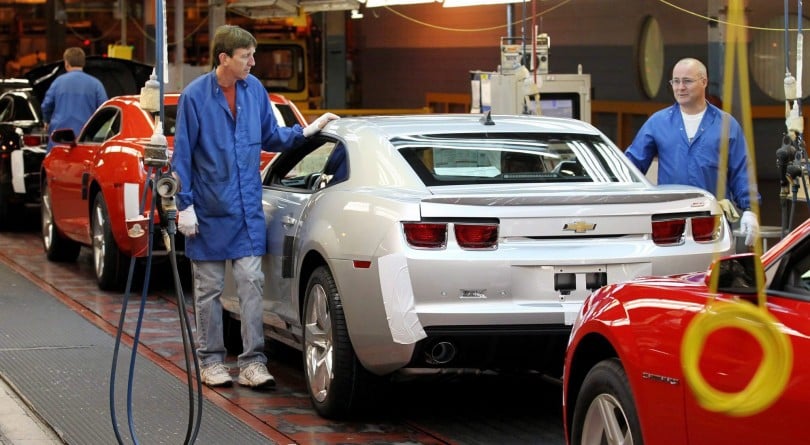 Workers on the line at the GM Canada assembly plant in Oshawa, Ont. Tuesday, April 27, 2010. It may come off as heresy, but Canada is no longer leading the industrialized world out of the recession  it may be in the process of becoming an economic laggard. THE CANADIAN PRESS/Darren Calabrese

Donald Trump gave Canada an arbitrary deadline Aug. 31 to reach a deal with America’s trade negotiators. The U.S. president said he had two alternatives in mind should the two sides be unable to come to an agreement: he would effectively rip up NAFTA or place huge tariffs on Canadian auto imports.

The president seemed to be weighing which route would inflict the most damage on Canada. “I think with Canada, frankly, the easiest thing we can do is to tariff their cars coming in,” Trump said earlier this week. “It’s a tremendous amount of money and it’s a very simple negotiation. It could end in one day, and we’d take in a lot of money the following day.”

Well, the Labour Day long weekend came and went with no press conference of smiling politicians announcing an end to the impasse. “ We’re continuing to work very hard and we’re making progress, but we’re not there yet,” Chrystia Freeland, Canada’s foreign minister, said Friday. Instead, talks are expected to resume next week—though it’s hard to know if Trump is negotiating in good faith.

Listen to Aaron Hutchins talk about auto tariffs on The Big Story podcast.

Instead of talking about progress in negotiations, Trump was tweeting out his anger over his recent “off the record” comments to Bloomberg, which were then leaked and published by the Toronto Star, in which the president reportedly said: “Off the record, Canada’s working their ass off. And every time we have a problem with a point, I just put up a picture of a Chevrolet Impala.”

Wow, I made OFF THE RECORD COMMENTS to Bloomberg concerning Canada, and this powerful understanding was BLATANTLY VIOLATED. Oh well, just more dishonest reporting. I am used to it. At least Canada knows where I stand!

In short: Canada is dealing with a riled-up president who perhaps isn’t negotiating in good faith, has seen his impossibly short deadline pass, and has talked about imposing what would be crippling tariffs to Canada’s auto industry— never mind the damage it would do to America’s auto industry.

“If people think this is theatre or a tactic, get that out of your mind,” says Dan Ujczo, a trade lawyer specializing in Canada-U.S. relations. “This is a tenet of the Trump administration. Canada, Europe, Japan should all be on notice that auto tariffs are coming.”

But if Trump chose to move forward with a 25 per cent tariff on Canadian auto imports—a number he has floated, and which experts told Maclean’s would have a ‘disastrous effect’ on Canada—how easily could he bring it into effect, and how soon?

When Trump imposed steel and aluminum tariffs earlier this year, the president used his authority under Section 232 of the 1962 Trade Expansion Act, which handles the safeguarding of national security.

As preposterous as it might sound to suggest Canada poses any kind of national security threat to America, he’s likely to use the same means to pass auto tariffs.

“[Section] 232 is the clearest and cleanest way,” says Mark Warner, a Canadian and U.S. trade lawyer. “Trump is used to being the CEO of a family run company and making decisions. He’s not good at this government stuff where you have to convince people to go along with you. If you show him 232, where you can do it all by yourself, that’s very attractive to a CEO.”

READ MORE: What will happen if Trump slaps a 25 per cent tariff on Canadian-made cars?

Carmakers with operations in both countries might try to intervene, likely by filing a legal challenge. But it may only succeed in delaying the inevitable. “You can picture a scenario where GM, Chrysler or Ford march off to court saying it’s an abuse of authority,” Warner says. “My judgement is once it gets up to the Supreme Court, Trump wins. American courts generally don’t second-guess the president on his executive power over foreign policy.”

Congress could also try to intervene, by passing legislation forcing the president to require congressional approval in using Section 232. But good luck getting the bill past Trump’s desk without him using his veto power. The only way a bill could be veto-proof from the president would be if the act passed by a two-thirds vote in both the House and Senate—an especially high bar considering how many members of Congress are Republicans from states that lean toward Trump. And even if legislation passed to give Congress such power, it would require retroactive effect to influence this move. “For the time being, there’s nothing in Congress that will slow this down,” Ujczo says.

Despite Trump’s penchant for threats aside, Canadians were able to enjoy the Labour Day long weekend knowing the tariffs won’t be in place by the time they returned to work. Even if he gives up on negotiations with Canada this week, he must complete a few steps before slapping this country with automotive tariffs.

One of the first requirements of Section 232 is the president asking the Department of Commerce to do an investigation and deliver a report within 270 days. Trump initiated an investigation into auto tariffs if May, but the report has yet to hit his desk.

“We anticipated that was going to be done in August, but a few factors delayed the report,” Ujczo says. “For starters, there were questionnaires sent out to the [auto] industry and the industry took its time responding to those. Part of the reason is because the industry doesn’t want these tariffs.”

Trump can’t pull the trigger on Section 232 until the Department of Commerce submits its report. “Procedurally speaking, I don’t think we’d see these done before the end of September, Ujczo adds. After that, the president would have 90 days to act on those findings.

That 90-day timeline is a maximum, Warner stresses, not a minimum. “If it went the way it went last year [with steel and aluminum tariffs], you’d see a decision early in the spring,” he says. “But Trump could easily look at that report and within two weeks make a decision.”