How to make Canada an energy superpower

Before a plane crash took his life, Jim Prentice co-authored a book arguing energy, First Nations and climate-change policies could be reconciled 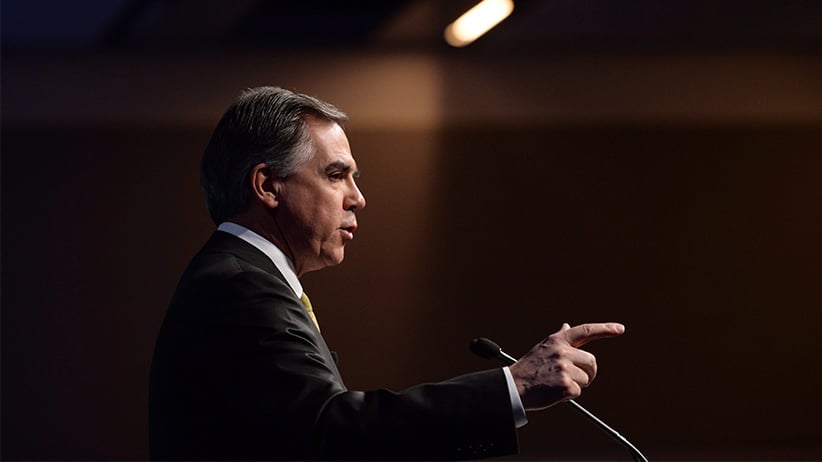 A question periodically haunts the minds of Albertans in the age of Rachel Notley’s not-too-popoular NDP government: what would Jim do? Jim Prentice, unlike the umpteen Tory premiers who preceded him in the province, lost in 2015. His death in a plane crash last October, just as he was concluding work on a new book, added to the curiosity. What would the climate-change regime of Alberta and Canada have looked like, and how would our pipeline politics have unfolded, if the decision-making table still included this managerially savvy former federal cabinet minister?

That book—Triple Crown: Winning Canada’s Energy Future—comes out this week, and with it part of the answer. While Notley applied an economy-wide carbon price and called strong environmental policy an obligation that would ease pipeline approval, Prentice believed … well, pretty much that. What’s more, he’d have added his voice to the chorus urging pipeline companies and Ottawa to secure First Nations’ active support for the energy conduits.

MORE: Jim Prentice, the politician who wasn’t there for politics

Prentice’s arguments are striking not only in their closeness to those of Notley and Prime Minister Justin Trudeau, but also in how far they diverge from the orthodoxy of today’s Conservative Party, where Michael Chong is the clan’s black sheep for daring to advocate a price on carbon. In Triple Crown, the late Tory heavyweight is harder on Alberta’s old “crusade against climate science” than on Notley’s planned cap on total oil sands emissions, which he greets with little more than gentle caution. And he gives Notley credit for instituting a carbon tax and suggests he’d helped lay the groundwork for her approach. As for a federal strategy, he advocates a national emission-reductions mandate that lets provinces decide between carbon tax, cap-and-trade and other mechanisms—essentially what Trudeau announced shortly before Prentice’s death.

Prentice and co-writer Jean-Sébastian Rioux, his former federal aide and a University of Calgary professor, were one-quarter of the way through draft reviews last October when Prentice took a Thursday golf trip to Kelowna, B.C., never to return. On the Friday, as Rioux was absorbing the shock next to Prentice’s wife, he recalls Karen Prentice telling him: “You’ve got to finish that book.” Rioux and publisher HarperCollins opted to make no substantial changes to Triple Crown’s final three-quarters, keeping fidelity to the late leader’s ideas and vision.

In it, Prentice charges that Canada has proven “amateurish” rather than becoming the “energy superpower” imagined by Stephen Harper, his former boss. Its natural resources can’t attract global commodity prices; it remains over-dependent on the U.S. market; it has kept First Nations increasingly frustrated on the sidelines; it, had, at time of writing, failed to get new pipelines built in any direction. A staggering amount has occurred since Prentice died: Trudeau approved the Trans Mountain pipeline expansion to B.C.’s Lower Mainland but scuttled Enbridge’s Northern Gateway, the project Prentice favoured because its port could accommodate larger tankers bound for Asian markets. And, of course, Americans elected Donald Trump, who would revive Keystone XL while seeming to extinguish any chance Washington might act on climate change. This would have posed a challenge to Prentice. On one hand he urges Canada to assert leadership on climate action; on the other, he’s keen to harmonize policies with the U.S. and not erode his country’s competitiveness. What would Jim do? On this one it’s hard to say.

Those who knew Prentice could predict how light his book is on political gossip and recriminations from a former politico. He was never a partisan sniper or score-settler; always more of a diligent solution-seeker (perhaps to his political detriment, ultimately). He does take jabs at former president Barack Obama for a “Clean Energy Dialogue” that proved to be more a U.S.-only monologue, and for having a “cartoonish” view of this country’s environmental record. Harper-era minister Joe Oliver takes criticism for blaming of pipeline pushback on foreign “radical” environmentalists—a smear the author says galvanized First Nations opposition to the project—while Prentice’s successor in the federal environment portfolio, Peter Kent, is dismissed as the “hapless”guy who had to officially withdraw from the Kyoto protocol after years of foot-dragging. Trudeau, he warns, is repeating a mistake by committing to the emission targets from the Paris climate conference, which Prentice deems impossible to fulfill.

But he acknowledges the expectations and obligations Canada must meet, on environment and indigenous affairs. If Canada can’t commit to world-class coastal safety, he writes, “then we shouldn’t be shipping oil at all”—and he wants the Alberta government to help pay for such pledges. A former aboriginal affairs minister, Prentice devotes one of the book’s six parts to describing his view of a First Nations partnership on Canada’s energy projects. He calls for a First Nations’ stake in energy infrastructure projects to compensate for infringements on their Aboriginal title (Enbridge’s Northern Gateway offered such an equity plan). “Without it, nothing will happen,” he writes. “With it, all things are possible.”

Rioux, who faces book launches without the book’s visionary, reckons Triple Crown could have helped relaunch Prentice into the public sphere after Alberta humbled him out of electoral politics for good. “I think he had 10, 20 years of service left,” he says. “You need something gnarly to be solved some place in Canada? Let’s call Jim. We’re missing a person who could have been part of the solution.”

Karen Prentice hopes the book inspires leaders to consider what Jim would have done. Two months after her husbands’ death, she mustered the courage to read the manuscript he’d left on the credenza at home. The bound volume now in her hands, she rereads the book’s few personal anecdotes, her favourite parts. “What crossed my mind is how fortunate that we are as a family to have that book,” she says in an interview. “But I’m also happy the greater public will have the opportunity to read it.”