The best way to make Loblaw Cos. pay for fixing bread prices is to avoid items that it makes more profit on, like its President's Choice line of products. 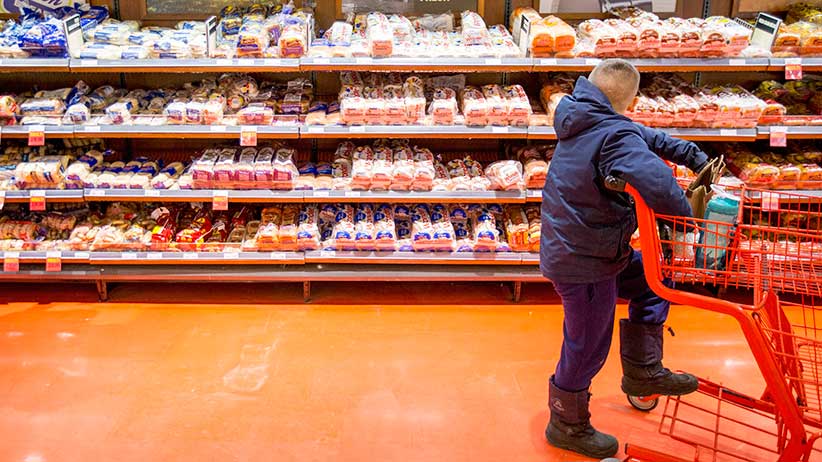 The bread aisle at a Loblaws in Toronto. (Carlos Osorio/Toronto Star via Getty Images)

This article has been republished to correct a mistake in the original headline that said the best way to punish Loblaw Cos. is to buy products that produce high profit margins. Don’t do that.

Bread buyers are angry, and rightfully so. Last December, Loblaw Co. confessed to operating a price-fixing scheme on bread with its parent company George Weston Ltd. Between 2001 and 2015, Loblaw grocery retailers and Weston bakeries controlled price increases on the household staple, effectively costing Canadians as much as $400 over its 14 years of fixing prices—and that’s if you buy just one loaf per week.

Now, amid Breadgate, the company is offering consumers meagre compensation in the form of $25 gift cards that can be redeemed at Loblaw-owned retailers. As of Jan. 8, shoppers can register online for the free credit, a gesture by Loblaw to make up for its actions. Many consumers say that $25 is not nearly enough to make up for the bread prices they’ve had to endure for over a decade, as is evident from the number of class actions propping up across the country.

Still, the gift cards are there for those who want them. And for those who feel cheated, there are ways to put them to good use—or, if you prefer: to take Loblaw to the woodshed. But to get your due, there are some grocery products consumers should buy, and some they should avoid. A few helpful tips:

It’s all about the margins

Inside a Loblaw store, products along the periphery usually have the highest gross margins, and therefore produce the most profit. If you’re shopping with the store’s own money—and really want to make the company pay—those are the ones you don’t want to buy. That’s because low-margin goods cost the company more to sell.

It varies by retailer, but the high-margin products are generally understood to include produce, meat, baked goods and the pre-made meals most stores now showcase as soon as shoppers walk in—the stuff that grabs your attention.

Stores also enjoy higher margins on bottled water, greeting cards, cereal and, in general, products that are strategically shelved at eye level. So stoop down and see what’s on the bottom shelf.

By spending your $25 on the company’s house brands like President’s Choice and No Name, says George Condon, a consulting editor at Canadian Grocer, “you’re supporting Loblaws.” House branded products deliver higher margins to the company than do comparable products from big name brands because there’s less money spent on marketing them. So even though the price tag on a President’s Choice product might be lower than a similar name brand item, the company pockets more of a profit. Is it any wonder there are 3,500 different President’s Choice products in stores like Loblaws, Zehrs, Real Canadian Superstore, No Frills and Shoppers Drug Mart.

In the centre of a Loblaw store are the canned goods and packaged foods that rake in the least profit for the retailer, these are the products you want to purchase. Keep in mind that grocers in Canada don’t make a lot of money off food: Condon estimates that they only earn about one or two per cent in profit off food purchases at the end of year.

For Sylvain Charlebois, a professor in food distribution and policy at Dalhousie University, the best way to get back at Loblaws would be to go into the centre aisles and, he reiterates, don’t buy products that carry the President’s Choice and No Name labels. “The last thing Loblaws wants to do is sell brands they don’t own,” he says.

Or.. give to those hurt most by price-fixing

Charlebois recently registered for his $25 gift card. When he receives it a few weeks from now, he won’t be boycotting Loblaw brands. Instead, he says, people “should give it to charity.”