The housing market might absorb any new tax, and over time, the measures could even reduce rental pool 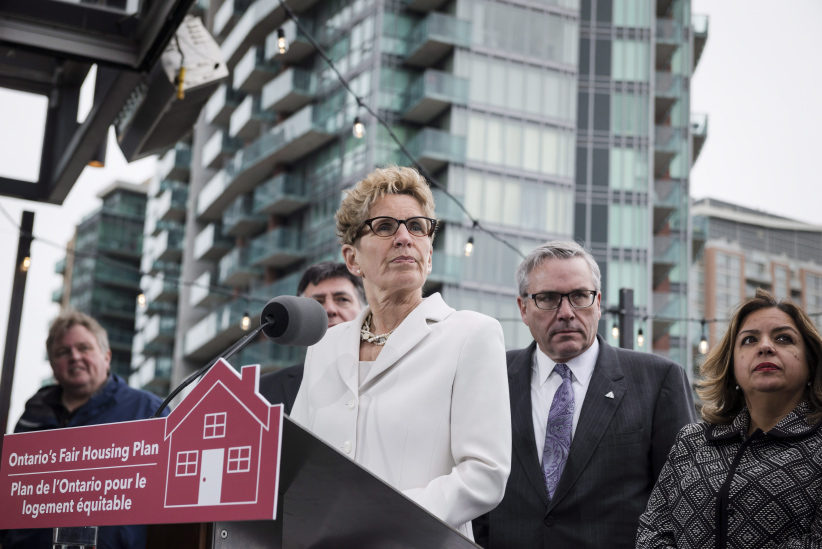 TORONTO – Toronto’s runaway real estate market could take a breather due to Ontario’s new housing measures, but much like what transpired in Vancouver, the impact of the changes is expected to be short-lived, experts say.

Premier Kathleen Wynne announced more than a dozen new initiatives aimed at reining in prices that have soared out of reach for many homebuyers, including a 15 per cent tax on non-resident speculators in the Greater Golden Horseshoe, a fast-growing region that stretches from the Niagara Region to Peterborough, Ont.

The province is also expanding rent controls and giving Toronto and other municipalities the power to impose a tax on vacant homes, something that Toronto Mayor John Tory has been pushing for.

MORE: The Wynne government flies blindly into the housing bubble

“Ultimately at the end of the day, you probably end up in a situation where the market absorbs the tax and keeps pushing higher,” said BMO economist Robert Kavcic.

Benjamin Tal, deputy chief economist with CIBC, said the measures are likely to cool the market over the next six months as many buyers will move to the sidelines to assess the fallout stemming from the changes.

“The slowdown in Vancouver was not entirely due to the tax — it was domestic buyers who were basically sitting on their hands waiting to see the impact of the tax.”

Home sales plunged and price growth stalled for months in Vancouver following the B.C. government’s introduction of a 15 per cent tax on foreign buyers last August.

But a recent report from realtor Royal LePage suggests the Vancouver market may be starting to bounce back as demand starts to return.

That’s what experts are predicting will happen in Toronto.

“A lot of local buyers will sit on the sidelines for a while to watch and see what happens, and then that pent-up demand will re-enter the market down the road once the fear and the unknown has passed,” said Blair Mackey, a sales representative with Royal LePage Real Estate Services.

However, Kavcic said the impact in Toronto could be more muted than it was in Vancouver, as the tax is not coming as a surprise and there are more exemptions. For example, international students will not be subject to the tax.

“We’ve already known for months that this was probably coming down the pipeline, versus Vancouver where you woke up one morning and there was a 15 per cent tax,” he said.

Economists said they were somewhat surprised not to see any measures tackling domestic speculators, particularly considering the amount of discussion the topic had drawn.

Such rules could still be coming, said Tal.

“Domestic flippers probably will be the next target,” he said.

Tal took issue with the province’s plans to expand rent control, which currently applies only to units built before November 1991, to all private rental units. The guidelines cap rental increases and in recent years the cap has averaged at two per cent. This year it is 1.5 per cent.

“You really want to protect tenants. The issue is that builders will tell you that if you impose rent control that is only as high as inflation, that is not enough for them to start building.”

Tal said he suspects that over the next few years, builders who were planning to construct rental buildings will opt for condos instead or cancel the developments altogether, a move that would reduce the supply of rental units.

A better measure would have been to cap rents at inflation plus one or two per cent, said Tal.

“By doing so, you do provide tenants with protection. There is a cap. But at the same time, the number three, three-and-a-half, is actually the magic number for developers.”