Household debt, weak investment and uncertainty about inflation makes everything about the economy feel temporary. Including Wednesday's rate bump. 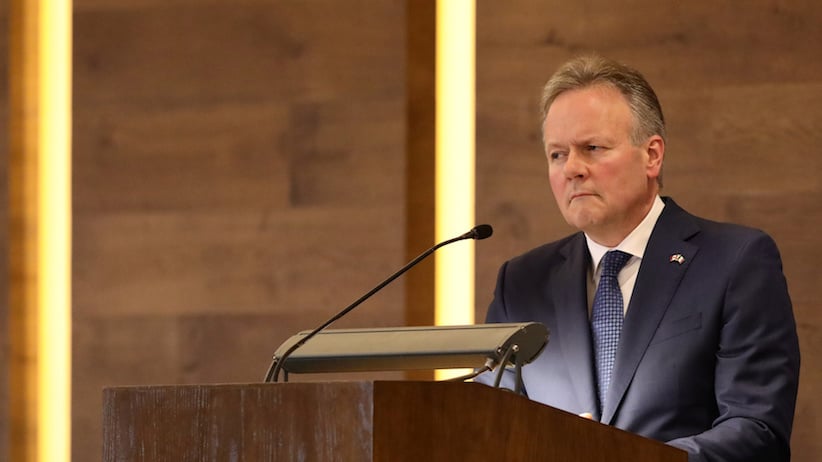 The Bank of Canada’s decision to raise its key interest rate to 0.75 per cent today was entirely expected. The bigger question was what’s next: is the central bank’s intention to simply reverse the two rate cuts made in 2015 that dealt with the oil price crash? Or is today the start of a path toward higher interest rates?

Despite the bank’s upbeat tone, Governor Stephen Poloz was reluctant to commit to either scenario. “I’m hesitating to classify it as either one of those stories,” he said at a press conference this morning. “There’s no predetermined path at this stage. It’s a data dependent, quarter-by-quarter analysis that we’ll be doing.” His opening remarks made clear, too, that future interest rate adjustments will be “guided by incoming data.”

It’s a cautious statement given the Bank of Canada’s newly hawkish stance. But there are good reasons for Poloz to be prudent regarding future rate hikes. Here’s what he’ll be watching.

The central bank has a single mandate: control inflation. So it may seem odd to raise rates at a time when pricing pressures are largely absent. The Bank of Canada even lowered its inflation projection for 2017 to 1.6 per cent from 1.9 per cent.

Poloz made two points on this topic today. First, he said the factors weighing down inflation are temporary, such as rebates from the Ontario government that have constrained consumer energy prices. Second, monetary policy can take between 18 and 24 months to fully affect inflation, so central bankers have to gauge where it’s headed in the future. The bank projects that inflation will hit two per cent again in 2019, and there is a chance it could actually overshoot.

The risk is that inflation remains weak. Wages, for example, haven’t exactly been rising at a robust pace even though the labour market is picking up steam. Oil prices are projected to remain low, too. Canada is not alone in this regard. Many developed countries are dealing with low inflation even as economic indicators show signs of strength. The Bank of Canada notes that temporary factors are not the only thing keeping inflation low and that “global structural factors…may be playing a larger role than believed.” To take one example, the rise of e-commerce has increased competition in the retail sector, potentially keep pricing pressures at bay.

If inflation doesn’t meet the bank’s expectations, there is a possibility that higher rates could cut off economic growth—all the more reason for Poloz to keep a watchful eye now that the bank has finally moved on rates.

Canadian households are in a precarious position, having amassed piles of debt as interest rates have fallen. What’s more, housing and consumption have played a huge role in driving the economy in recent years. The Bank of Canada, however, is encouraged by a “broadening” of GDP. Other sectors of the economy are growing for a change, so the country will not be as reliant on household consumption.

Still, the risk is that higher rates send some indebted households over the edge, and consumer spending falls more than anticipated. The housing market in the Greater Toronto Area, the most important in the country in terms of its impact on the economy, is already slowing down in the wake of policy changes introduced by the provincial government earlier this year. Higher borrowing costs could contribute to that slowdown. On top of that, the Office of the Superintendent of Financial Institutions proposed further changes this month to restrict mortgage availability.

In light of these changes, David Madani at Capital Economics anticipates higher rates will have consequences. “The economy is on the verge of a slowdown due to housing-related weaknesses, especially now that household borrowing costs have risen,” he wrote in a note today. “As we move through the year, we expect this weakness to become self-evident and this to put the brake on talk of further interest rate hikes.”

The Bank of Canada doesn’t share that view, but it is well aware of these risks. The fact that household debt is at record highs creates some uncertainty about how Canadians will absorb rate hikes, too. Poloz said as much today: “The economy may be more sensitive to higher interest rates than in the past, given the accumulation of household debt. We will need to gauge carefully the effects of higher interest rates on the economy.”

The Bank of Canada knows that business investment is still weak. It’s been on a drag on GDP, especially last year, and the recovery has been modest. The bank anticipates business fixed investment will contribute only 0.3 percentage points to real GDP growth next year. The central bank’s research shows much of the slowdown can be traced to the oil shock and the country’s aging demographics, though senior deputy governor Carolyn Wilkins noted today that “there is a little bit of a puzzle” regarding business investment “so that’s why we’re keeping it as a risk.”

And even though Poloz emphasized that exports are recovering, the bank still characterizes its projections as “cautious.” Competition could be greater than anticipated, and Canadian exporters could lose market share and postpone investments here and abroad. A higher Canadian dollar—one result of an interest rate hike—could also hurt the competitiveness of some domestic firms. Potential changes to the North American Free Trade Agreement still loom.

It’s little wonder, then, that Poloz closed his otherwise buoyant remarks today with a nod to the “continued uncertainty and financial system vulnerabilities” still affecting the Canadian economy.