The new Happy Meal mascot gets a chilly reception on social media, and shows a company ready to lure kids back in 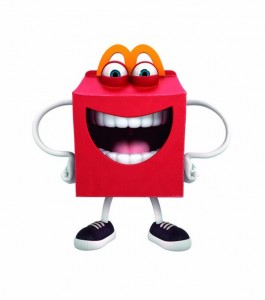 McDonald’s is getting grilled on social media for its newest mascot, “Happy”—a Happy Meal box with a big toothy grin. Asked one Twitter user: “Is Happy really happy, or really scary?” Said another: “The new Happy Meal mascot is a box with teeth. It was designed by David Cronenberg.”

While Happy’s not a particularly lovable mascot—some have even speculated that Happy is designed for social media users to make fun of, which may be giving McDonald’s marketers too much credit—it’s hardly any scarier than the other characters the burger chain has used to peddle its kid-focused offerings over the years. Mayor McCheese, after all, had a cheeseburger for a head. Even Ronald McDonald, one of the most iconic mascots ever created, could easily become the stuff of nightmares if encountered in, say, a dark alley or abandoned warehouse, as opposed to a brightly lit restaurant.

More interesting than Happy’s reception on social media is the fact McDonald’s decided to create a new mascot in the first place. So far, the chain’s rebranding has focused on transforming McDonald’s into a more hip, Starbucks-like hangout, complete with espresso drinks, comfy seats and free Wi-Fi—an environment that doesn’t pair well with garish clowns or giant purple cartoon characters. Another reason McDonald’s retired its colourful McDonaldland cast members were criticisms that it was trying to bypass parents and market its unhealthy fare directly to children. But those concerns seem to have suddenly gone out the window amid flatlining sales growth and studies suggesting that as many as one billion fewer families made trips to U.S. restaurants since 2008. Now, McDonald’s is pulling out all the stops to try and lure kids (and their parents) back into its restaurants any way it can.

For its part, McDonald’s said the new Happy character, imported from France, was meant “to promote fruits, veggies and wholesome eating,” including a new 50-calorie yogourt side option for its Happy Meals, which is already available in Canada. Under fire about the nutritional quality of its menu, the chain also plans to stop promoting soft drinks as a Happy Meal option on its menu boards, and is testing the addition of clementines or mandarin oranges as another side.

While that may help to blunt criticism, it risks muddling what has hitherto been a rather effective image makeover. In an apparent attempt to walk the line between cool and family friendly, McDonald’s is at risk of entering the same fast-food no-man’s land that resulted in Burger King’s “creepy” commercials featuring “The King” and his giant plastic head. Case in point: McDonald’s recently tried to reintroduce Ronald to the world of social media by giving him an “updated” look that, for some unexplained reason, involved yellow cargo pants, a red blazer and a hairdo that Maclean’s columnist Scott Feschuk described as “up-to-date with the look favoured by my Mom’s friends in 1976.”

Not surprisingly, that effort was panned on Twitter, too.