Man recovers $100,000 he stashed in his TV set 30 years ago and forgot. Seems like a feel-good story, right? It's actually a financial nightmare. 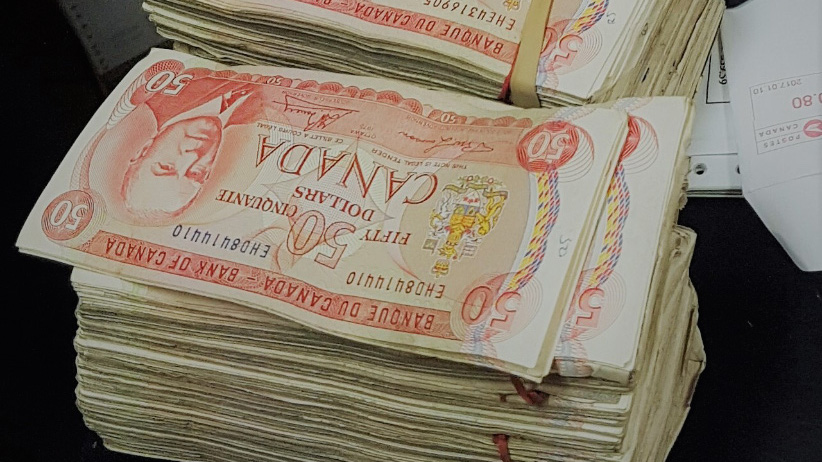 Last month workers at a Barrie, Ont. recycling plant were in the midst of tearing apart a 1980s TV set when they stumbled across a cash box stuffed with $50 bills—all told, more than $100,000 worth. Rather than keep the money for themselves (which, incidentally, they were legally entitled to do) the workers reached out to the RCMP. After determining that the bills weren’t counterfeit and hadn’t been reported stolen, police used old bank records from 1985 also found in the box to trace the money to its owner, a 68-year-old man living in Bolsover, Ont, roughly 130 km north of Toronto.

While the man’s name was not released, he told police he received the cash as an inheritance from his parents, and that he’d tucked it away inside the TV set for a rainy day. That rainy day never came, and he simply forgot about the hiding spot, eventually giving the TV to a family friend who eventually dropped it off at the recycling yard. In the end the man told police he was “relieved and ecstatic” to be reunited with his forgotten treasure, and the tale soon garnered international media attention such as a feel-good news report by ABC News in the U.S., which concluded with the anchor exclaiming: “It’s worth like eight times what it was back then.”

Actually, no. It’s quite the opposite. In fact, the whole story has all the makings of a financial advisors worst nightmare.

Here’s why. In the three decades since 1985, the consumer price index has climbed 108 per cent, meaning someone today would have to fork over more than $200,000 for the same basket of goods and services that they could have got for $100,000 in 1985. By simply stashing away the money and forgetting about it—something that actually happens more often than realized—the man’s money had lost more than half its value through inflation alone.

“If you have a lump sum of money and do nothing with it—put it under a mattress, inside a TV or in a chequing account—you’re losing purchasing power every single year,” says Preet Banerjee, a personal finance expert. “Had he invested in the market over a long period of time, he would have had a significant increase in wealth.”

Instead of hiding the money, for instance, the man could have bought himself $100,000 worth of physical gold at the beginning of 1985, Banerjee says. Had he held on to that investment, it would be worth about $180,000 today after inflation. “It would have almost doubled his purchasing power, but a lot of other investments would have done a lot better,” he says.

Alternately, if the man had simply invested his $100,000 inheritance in the benchmark Toronto Stock Exchange index, set his dividends to be automatically reinvested each year, and done absolutely nothing else in the intervening years, he’d have a nest egg today of $700,000, despite several massive stock market collapses over that time frame.

Of course, if the stock market wasn’t his thing, and if he had access to just an additional $9,000, he’d have had enough to buy the average priced home in Toronto outright—no mortgage needed. Where would that single real estate investment have taken him financially? Today the average Toronto home price is in excess of $750,000, though that doesn’t factor in the cost of upkeep and property taxes over the decades. (As it is, the rediscovered $100,000 might just get him a tiny bungalow in Regina.)

So what should someone who just came into $100,000 do with the money. Police told media they hope the money gets put into a savings account. Banerjee would recommend sitting down with a financial planner. “I’d avoid hiding it in a TV,” he says. “But that’d be much harder anyways, with these flat screens.”