As part of MoneySense's financial literacy week, here's a look at three different budgets to help you plan your spending more thoughtfully 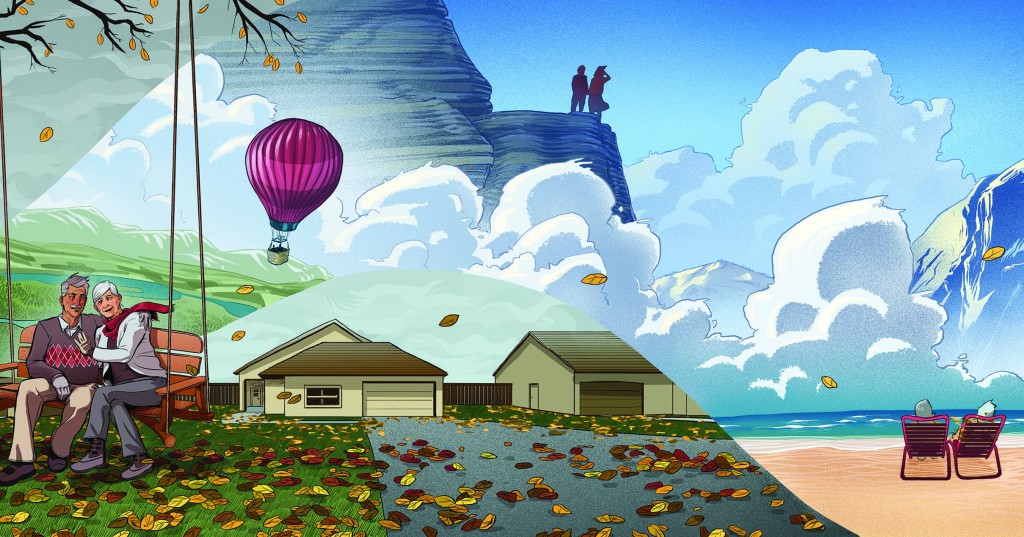 This story, by David Aston, was first published at MoneySense in December 2014. Maclean’s will be republishing a series of stories from MoneySense all week for MoneySense Week, a blitz of practical information about your bank account and bottom line during Financial Literacy Month in Canada.

As you prepare for retirement, you’re probably trying to ensure you’ll have lots of money to spend. But don’t just focus on the size of your budget: it’s just as important to be wise when it comes to how you spend.

While there is no one right approach to doing that, here’s a simple and effective strategy: manage spending carefully on the basics like shelter, transportation and groceries to ensure you have ample money left to spend on the non-essential activities like travel, hobbies, entertainment and helping others. It’s these extras that make for an active and rewarding retirement.

The value of this type of spending strategy is backed up by research, which shows that spending money on experiences and helping others is what contributes most to happiness (see “Inside the Science of Happier Spending”). In what follows, we’ll show you how to put this approach into practice, illustrated by the experiences of three couples with vastly different retirement budgets. (We’ll focus on retirement spending for singles in a subsequent article.)

Fortunately, you can enjoy a comfortable retirement on far less money than you needed during your peak earning years, when you likely carried a hefty mortgage and bore the costs of raising children. In my view, you should be able to live a middle-class retirement lifestyle spending $42,000 to $72,000 a year per couple (including what you pay in income taxes), assuming you have a paid-for home and no debt. After tax, that will leave you with about $38,000 to $62,000 a year to spend how you choose.

The minimum of about $38,000 (excluding taxes) should be sufficient to cover the basics, including operating a car and eating healthily. Annie Kvick, a certified financial planner with Money Coaches Canada in North Vancouver, advises keeping your annual spending on the basics within the $25,000 to $35,000 range, while trying to ensure you have at least $10,000 for extras. “I find people like to spend at least $10,000 a year on that fun category,” she says.

What about the other end of the spending spectrum? There’s no clear dividing line between a middle-class lifestyle and something more luxurious, but $62,000 should cover the basics plus a moderate amount of travel, hobbies and entertainment.

To show how smart spending can make a difference, let us show you how three retired couples spend their after-tax dollars (see “The Cost of Retiring Well” below).

Our first couple, Pam and Rob Taylor of Victoria, B.C., live frugally but comfortably spending $37,600 a year, very near our minimum threshold. Ross and Helen Cooper of Vancouver have a much higher budget, spending just over $80,000 a year. (Their names and some identifying details have been changed.) To provide a benchmark, we also show spending by a statistically average fictional couple we’ve dubbed Phil and Sarah Statscan. Their budget represents average spending by senior couples, based on a 2010 survey by Statistics Canada, which I’ve adjusted for inflation. The Statscans spend almost $50,000 a year: about $38,000 on the basics and $12,000 on extras.

So if you have a modest budget like the Taylors you need to prioritize carefully. If you have an ample budget like the Coopers you can do a lot more, but it’s still a good idea to think hard about what’s most important to you. Here’s how they do it.

The Taylors first described their spending experiences for MoneySense readers four years ago (in “Three Happy Couples,” in the September/October 2010 issue). Since then they have continued to spend little while enjoying an active retirement in their 50s. They enjoy all the trappings of middle-class life, including a paid-for three-bedroom home in a nice neighbourhood and a mid-level car. They prepare healthy meals with lots of fruit and vegetables, fresh fish and modest quantities of meat. They eat out occasionally and take regular vacations. The Taylors spend just over $25,000 on the basics, which leaves enough left over to spend almost $12,000 on the extras.

How do they do it? They’re just careful about how they spend money. Their car is 10 years old and they have no plans to replace it soon. They do their own home maintenance when they can. When they need new clothing they shop when they’re visiting the U.S., where it’s usually cheaper.

They shop the specials at three nearby grocery stores. “By doing that I think we save at least 15% to 20% on groceries,” says Pam. They take plenty of vacations, but their approach is relatively inexpensive, with the biggest cost coming from occasional airline tickets. They often stay with family members who are spread throughout Canada, the U.S. and overseas. Sometimes they go on camping trips. One year they did a house swap with a couple from Europe.

The Taylors both have university educations and held high-paying jobs in the technology industry while raising one child, who now lives independently. Their modest spending habits allowed them to build their savings quickly while working, so they were able to retire in their early 50s. Many advisers tell prospective retirees that they need to replace 70% to 80% of the peak income they had while working, but the Taylors live on less than 20% of the $250,000 they earned while working. “I think the 70% to 80% ratio is a myth,” says Pam.

Still, the Taylors wouldn’t mind spending another $5,000 a year so they could travel more and hire people to do some home maintenance. They are exceptionally conservative about how they draw down their large nest egg and have been reviewing their budget to see if they can squeeze out a bit more spending without too much risk. “We’re comfortable with what we spend now, but it would be nice to loosen up a little,” says Pam.

An engaged and active retirement

Next we turn to the Coopers, a Vancouver couple, both close to 70, who can afford to spend more than double what the Taylors do. While they have lots of money to do the things they consider important, they don’t live a lavish lifestyle.

The Coopers spend modestly on the basics, which leaves plenty for the extras that give them the most satisfaction, like travel. Their basic spending, at just under $45,000, isn’t much more than that of the Statscans. But by economizing on the basics, they can afford to spend about $36,000 on the extras.

The couple’s wealth and moderate lifestyle are related. They were brought up in low-income households and learned frugality early on. During their working years, they lived on Ross’s salary as a public sector professional while Helen had primary responsibility for the household and raising their three children, who now have families of their own. They also benefitted from Ross’s pension plan. They saved by living well within their means and they invested wisely. Now they have far more money than they need to support their accustomed lifestyle. “We see other people who have come from wealthier backgrounds and they are used to spending more,” says Ross. “But we never got used to spending a lot.”

The Coopers have two vehicles, but they’re not luxury brands. They own a compact car for getting around town and a four-wheel-drive for navigating bad roads to and from their vacation property. They typically buy their vehicles used and keep them until they are well over 10 years old. “If it works, I keep using it,” says Ross. They spend a bit more on groceries than the Statscans, but not a huge amount.

But the Coopers love to spend money for the benefit of their extended family. They have a two-bedroom condo in the city as well as a vacation property that’s popular for visits from their grown children, their spouses and grandchildren. They spend $7,200 a year at restaurants, to a large extent hosting family get-togethers.

They also enjoy spending on activities that help keep them active and engaged. They use their $16,000 travel budget to take regular vacations in Canada, the U.S. and overseas. “Part of our philosophy is we’d rather do these things while we can, because one day we won’t be able to,” says Ross. They even spend some of that budget to cover the cost of extended family joining them on vacation.

The Coopers also contribute to their grandkids’ Registered Education Savings Plans (RESPs). And while the $6,000 they budget for charitable and personal gifts is not enormous, they have distributed around $500,000 to their kids over the years to give them a good start.

Annie Kvick, who has provided financial advice to the Coopers, says their approach to managing money is right out of the pages of The Millionaire Next Door, the bestseller by Thomas Stanley and William Danko that describes how families get wealthy by saving carefully and avoiding status objects. “Living a modest lifestyle helped them accumulate, so they have an abundance of money,” she says. “If they need something, they buy it. But they’re not going to spend money just because they have it. They treat their money with respect.”

What are your priorities?

As the Taylors and Coopers show, it pays to spend your retirement money purposefully. It’s not about being a tightwad. Rather, it’s about setting priorities so you can spend as much money as possible on the things that matter. “It doesn’t matter if you have $40,000 or $60,000 a year to spend,” says Kvick. “The good news is that with a little creativity and flexibility, you can not only cover the basics, but you can have money for the fun things, too.”

The cost of retiring well

Below we show how much three retired couples spend each year on both the basics and the extras that can make life more fun. Two are real Canadian families— the Taylors and the Coopers—while the fictional Statscans are based on the average spending amounts reported by senior couples in Canada. 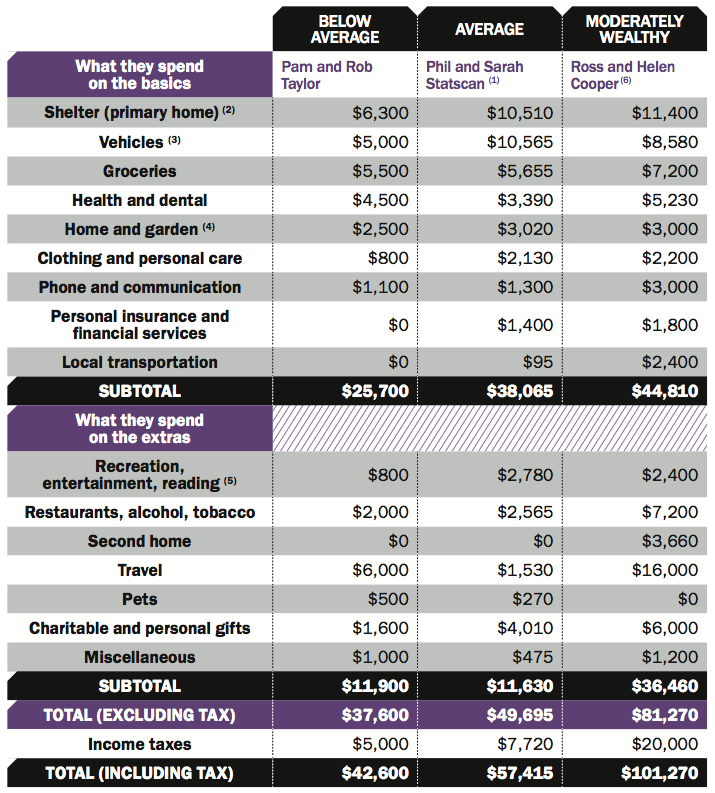 David Aston, CFA, MA, writes about personal finance. You can send him questions, comments and suggested article topics at letters@moneysense.ca.