The payoff to government coffers from the new plan is going to be lower than the $500 million that was expected, experts say 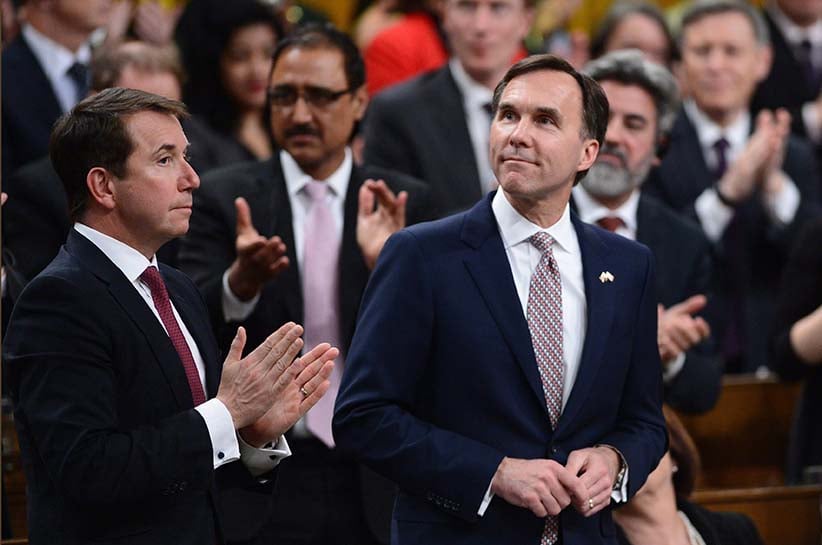 Consider yourself excused if you’re confused about the growing noise over the Liberals’ latest small business tax reform proposals. No, middle-class small business people are not under fire. Yes, it’s mostly about top-earning, self-employed professionals but it’s still going to hurt for some when the government slams the door on some rather generous tax breaks. As for the noise, it raises a few questions.

Is it fair? That’s a hard one to answer, according to leading tax experts. The tax code is riddled with exceptions and exemptions, so Finance Minister Bill Morneau could make a lot of reforms and still find himself wide open to criticism.

Will it raise a lot of money? Even if they, as expected, push ahead and pass the reforms as proposed, the payoff to government coffers is going to be lower than the $500 million that was expected, experts say. So no one is really going to be happy.

Ever since July 18, when Morneau announced proposals to limit some of the more lucrative tax benefits enjoyed by small business private corporations, there has been considerable backlash from lobby groups, professional associations and affected parties.

The truth is that taxation of small business corporations really just doesn’t work “fairly” anymore—and that’s assuming it ever did at any time in the last 30 years or so. Sure, various groups—doctors, lawyers, small biz owners, etc. have picked up a lot of tax breaks along the way for various reasons but these arguments all lead down a slippery slope. “‘Fairness’ is a magic word,” says Vern Krishna, a professor in the common law section of University of Ottawa Faculty of Law and counsel with TaxChambersLLP in Toronto. “We tend to think that if something is fair for others to do it, then I should be able to do it too.”

Suffice it to say that the deductions provided by the small business corporate tax structure are extremely rich and the new government proposals are intended to curtail them. And looking for ‘fairness’ in all this mess is going to be elusive. “It’s like a blind person looking for a black cat in a dark room—it’s not easy to pin down,” says Krishna. Add to that the fact that members of government and the public really like Finance Minister Bill Morneau—a dangerous omen for effective tax reform because being disliked tends to mean you’re actually doing your job.

A bit of history

Now, as long as we’re being thorough, here’s some context and history of the three key provisions Morneau wants to change—namely curtailing income sprinkling (or splitting) with family members, raising income tax on passive income held inside the corporation and the right to convert income into capital gains (in effect, lowering tax on investment income)—and how effective any of this will be in both “simplifying” the small business tax structure and raising much-needed tax dollars to pay for ballooning deficits. “These proposals are some of the most complicated in the entire Income Tax Act, and determining what is ‘reasonable’ is quite a challenge,” says Krishna.

The Regional Small Business tax rate was devised in the tax reform of 1972. Two different tax rates were enacted—one for small business (private corporations) and another one for larger businesses (public corporations). In a nutshell, it gave businesses—both small and big—lower tax rates. Why small business? Because back in 1971 small business had trouble getting loans from Canadian banks to grow their companies. The low tax rate meant they could keep extra capital in their business to invest and ultimately use when they needed it for expansion or other expenses. “So that was the justification for the low tax rate,” says Krishna. And while the low tax rate has fluctuated, it stands at 10.5% federally and 4.5% in Ontario for a total 15% small business tax rate—with small variances between provinces.

Let’s be clear, says Krishna. The low tax rate was not put in place because small business owners take more risk. This is a popular—yet false mantra—trotted out by politicians and lobby groups who have created their own stories and rationalizations around why small business “deserves” the tax break. “As we went along, the rules were complicated even more, and many anti-avoidance mechanisms were built in,” he says.

That’s because, until 1990, professionals such as doctors, dentists, lawyers, and accountants were not allowed to incorporate. They had to be sole proprietors or partnerships. But since small businesses could incorporate for the limited liability advantages, professionals wanted this advantage as well. So they too were allowed to incorporate for the liability coverage and lower tax rate. “Again, the word ‘fairness’ surfaced as a magic word,” says Krishna. “Fairness in tax law can be a slippery slope.”

Then in 2000, a new twist—Ontario doctors wanted a fee increase and the province had an idea. They allowed doctors with corporations to split income by being named shareholders in the corporation.  So the province gave doctors the tax break and then, according to Krishna, lawyers and dentists screamed “that’s unfair” and they too were allowed to tax split with family members in the corporation. “So Ontario saved tax money and the federal government had to pick up the tab, and all the while the province thought they were brilliant,” says Krishna. “And the doctors didn’t care who paid for this, as long as they got more.”

What are the main benefits of corporations for small business?

There are several benefits, including litigation protection, a lower business income tax rate (about 15%), and the ability to sell your business for up to $750,000 tax-free ($1.5 million tax-free if jointly owned with a spouse). But perhaps one of the most lucrative for families (besides the super low 15% tax rate) is a tax strategy that will minimize the overall taxation of company income, called “Dividend Sprinkling.”

What is Bill Morneau upset about?

The Liberals say that certain taxpayers are using corporations to pay less than their “fair share” of taxes. And while there are lots of high-income earners who will be affected, it has an unintended side effect that small-business owners (the restaurant owner, the bike shop repairman and the dry cleaning operator), who are considered the backbone of the economy, would likely have to pay higher taxes—and be worse off financially—as well.

What exactly does Bill Morneau want to change?

Morneau has three practices he is aiming to change—or eliminate completely. They include:

Where we are now

Fast forward to 2017. Deficits are growing—from $10 billion to $20 billion to $40 billion and beyond. The government is wising up to the fact that added revenue is required to cover the gap. A small business corporate tax proposal that ends income splitting among family members within a private corporation is part of a plan to raise $500 million (federally and provincially combined). And while there’s been plenty of talk on changing the small business tax structure over the last five years, not much was done about it until now and some of the changes were completely unexpected. “The changes to passive income taxation were completely unexpected,” says MacArthur. “There’s no draft legislation for the passive income proposals now and it will be an area that is complicated as well as difficult to change. So maybe that’s an area where not much will change.” What would tax policy experts like to see? “The entire small business tax as a whole needs another look,” says MacArthur. “Because if the purpose of the small business corporate structure is to encourage small business to grow and also grow the economy, then a lot of small businesses aren’t doing that.”

What are we likely to see?

After consultations, due to end in October, the feds will likely tinker with up to 10% of the total proposal and make it even more complex than it is now. The result? “A complicated proposal will become even more complicated,” says Krishna. “It will add more complexity and more unfairness to the tax system and provide lots of litigation business to tax lawyers and add pages and pages to the Income Tax Act, already at 50,000 pages. And to top it off, it likely won’t raise anywhere near the $500 million the government was hoping to raise.”

So what’s the answer?

If you go back to the 1966 Carter Commission Report, there are two or three themes that Krishna says make sense. First, “a buck is a buck is a buck” when it comes to taxation. That means not differentiating between various sources of income and treating all income equally for tax purposes. Whether it’s dividends, rental income, capital gains or salary, it should all be treated equally as income for tax purposes, he says. “We did not follow that initial rule and that is unfortunate for the tax system. All sources of income should be treated the same and it’s by distinguishing between them that you create distortions.”

The Carter Commission also recommended that taxation of corporations be ignored. “Corporations don’t pay tax, people pay tax,” says Krishna. “The money simply flows through the corporation and this creates the problems.” And MacArthur certainly agress with Krishna on one thing: “We need to step back and ask the big picture questions regarding our tax system as a whole,” says MacArthur.  “But how do you transition to a new tax system? Often it’s through attacking loopholes. But implementing these changes will be the hard part.”

Taxing all families as a unit

Recognize that the family unit should be the taxable unit, not the individual. “That’s why people split income through incorporation,” says Krishna. “There’s an incentive to move income from the higher tax-paying spouse to the lower tax-paying spouse.”

So going with a family unit for taxation purposes would solve a lot of these “inequities”. If you remove the need to income split by taxing the family unit of those in married or living common-law relationships and then adopt a flat tax for everyone—say 20%—there really is no need for small business to incorporate, except for perhaps liability issues. “You’ve removed the incentive to income split and lower taxes through incorporation because you now can do so without one,” says Krishna. And as a bonus, he figures the economy will likely improve and GDP may well go up.

MORE: What do doctors really have to fear from the feds’ tax crackdown?

If the ultimate cause of the problem was distortion from economic incentives, you have to ask yourself, “What is the economic incentive and how can we address it to reduce or eliminate it?” That’s what the end game should be, says Krishna. “And just like all murder mysteries have two driving forces—money or sex—so too does fiscal law, where everything is related to money and lowering taxes through tax avoidance,” says Krishna. “It all comes back to avoiding tax and [the notion of] what is ‘fair’.”

But income splitting for all families and a flat tax of 20% on all types of income may just be wishful thinking. What’s really more likely to happen in October after the three-month “consultation” period the government has outlined?  “Likely more litigation work for tax lawyers and a more complicated corporate tax structure with even more shades of gray that will provoke even more tax avoidance techniques,” says Krishna.