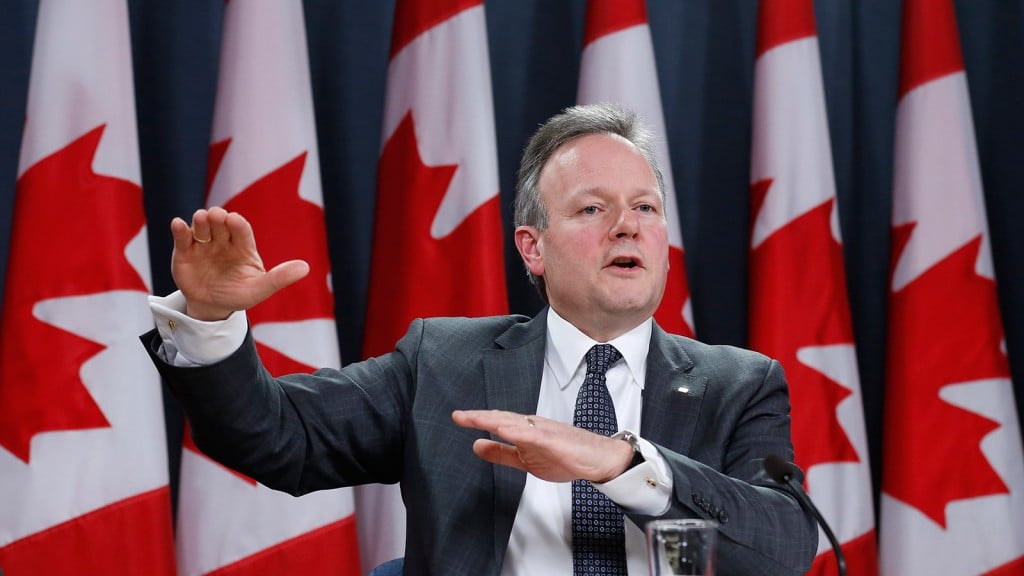 On Wednesday, the Bank of Canada will release its latest interest-rate decision and monetary policy report (MPR). The central bank is universally expected to leave the overnight rate unchanged for the 32nd consecutive meeting, continuing the longest period without a rate change since the 1950s.

Traders will continue to parse the Bank’s language for signals of how monetary policy will evolve – and it’s likely that they won’t get as many hints as they have in the past. These publications will be followed by a press conference, and later in the day governor Stephen Poloz and senior deputy governor Carolyn Wilkins are scheduled to testify before the House of Commons standing committee on finance.

Here’s the skinny on what to look for from the Bank:

The main takeaway from the Bank of Canada’s last statement, published on Sept. 3, was that things were (finally) starting to go according to plan. Expect a similar tone this time around.

Typically, the main communiqué from the governing council has been divided into five paragraphs in the Poloz era: a short one that lists the levels of short-term rates controlled by the Bank, another on the inflation outlook, one on the global economy followed by one on the Canadian economy, and a final paragraph that outlines the Bank’s justification for the current stance of monetary policy and offers hints on what to expect going forward.

With regards to the inflation outlook, the moderation in headline inflation (driven largely by a drop-off in gasoline prices) supports the Bank’s claim that the run-up seen earlier this year was fuelled by temporary factors. The level of core inflation (2.1 per cent as of September), however, does not. The governing council is likely to reiterate that the current levels of inflation do not reflect domestic economic fundamentals. To this end, Poloz has said that the Bank plans to publish an “underlying inflation” rate, which will in all likelihood be a modified version of core inflation that strips out some elements that are running rather hot (such as meat prices).

The state of the global economy is broadly similar to what it was in early September: Europe is weak, China’s growth is softening but still robust, and the American economy is on the right track. The Bank may choose to highlight the weakness in global growth and its effect on commodity prices in order to strike a bit of a dovish tone, though the decline seen in the price of oil is more of a supply than a demand issue. Canada’s economic fortunes are closely tied to the United States; if our neighbours to the south continue to do well, odds are that the Canadian recovery story won’t be derailed. “The Bank is in an ‘on the one hand, on the other’ situation right now – our best trading partner is still doing well, but commodity prices are down and those are dependent on the global economy,” said CIBC chief economist Avery Shenfeld. “From a domestic perspective, the only recent development that matters is the drop in the unemployment rate, which suggests a reduction in labour market slack.”

In Canada, economic data to start Q3 was incredibly solid. The nation booked its largest monthly trade surplus since 2008 in July, and manufacturing sales soared to a record high. However, the preponderance of data from August suggests that we took a step back, as manufacturing sales fell far more than anticipated and the trade balance swung back into deficit. These developments cancel each other out; the Bank will remain cautiously optimistic on exports but needs to see far more progress on this front. To borrow from one of the great artists of our time, monetary policymakers are likely wondering, “Are we out of the woods yet?” The answer: it’s far too early to tell, so we’ll have to wait for more data before we can see the forest from the trees.

The final paragraph is the most important one, and it’s also the one in which the language is most likely to undergo significant alterations. The governor has stated his intention to do away with forward guidance – the practice of offering hints on which way rates are likely to go next, or how long they might stay at a given level. “The key we’ll be looking for is to see if there’s any forward information at all,” said Bank of Montreal chief economist Douglas Porter.

Does the end of forward guidance mean that the language characterizing the Bank’s stance as neutral has to be removed? Not necessarily – because one could also make the argument that the Bank isn’t providing much in the way of forward guidance at present by having a data-dependent neutral bias. As previously written, the omission of a phrase indicating that interest rates could go up or down depending on the data flow is merely an affirmation that interest rates could up or down depending on the data flow. Removing this phrase would merely change an explicit data-dependent neutral bias into an implicit one.

However, Poloz’s discussion paper and comments in the press seem to be conditioning the market for a change in this final paragraph, so it would be rather surprising if there isn’t one.

“Any word changes will be aimed at providing less clarity, not more,” said CIBC’s Shenfeld. “Markets will get fewer clues, particularly now that the global economy’s course is increasingly vague.”

Four times a year, the Bank of Canada updates its projections and offers a detailed look at what it thinks about the Canadian economy, the global economy (in particular, the American economy), and a host of other pertinent issues.

After July’s torrid economic data, many economists were revising their targets for Q3 GDP growth upwards to well above the Bank of Canada’s forecast of 2.5 per cent. August’s underwhelming data have caused those projections to fall back down to earth, and as such, monetary policy-makers’ estimate looks quite prescient.

“I expect the Bank will be happy with its Q3 call, as the recent data flow has disappointed,” said TD senior economist Randall Bartlett.

As mentioned, the Bank will also publish an underlying inflation rate. Monetary policy-makers have engaged in similar thought experiments in the past, stripping out some components that aren’t behaving well, so to speak, in order to provide what they believe to be a more accurate take on inflationary pressures.

However, the governing council always cautions that these modified inflation rates are only useful looking backwards; that there’s no reason to believe the elements excluded shouldn’t be included going forward. As such, this underlying inflation rate is best understood as granular (and perhaps unnecessary) way of confirming the Bank’s thoughts on inflation – that it’s not really as high as the core rate makes it out to be.

“You have to be careful to not just take out the elements that go against your stance on inflation,” said CIBC’s Shenfeld. “The core rate was designed to be a measure that would filter out temporary effects and look at sustained pressures.”

“This underlying inflation rate may create more confusion as to what the Bank’s focus is on,” added TD’s Bartlett. “Alternative measures of core might muddy the waters a bit.”

In the October MPR, the Bank lays out its estimate for potential growth and also makes revisions to previous years. Don’t expect these to change by a substantial amount, though the Bank could elect to show that economic slack didn’t narrow that much in the first half of the year by boosting its estimate for potential growth in 2014 slightly, to two per cent from 1.9 per cent.

The Bank might also use this MPR to take an in-depth look at how lower oil prices affect the Canadian economy, and provide further detail on the “new neutral” for the overnight rate outlined by senior deputy Wilkins in a recent speech.