Why does Andrea Horwath want to eat the rich? - Macleans.ca 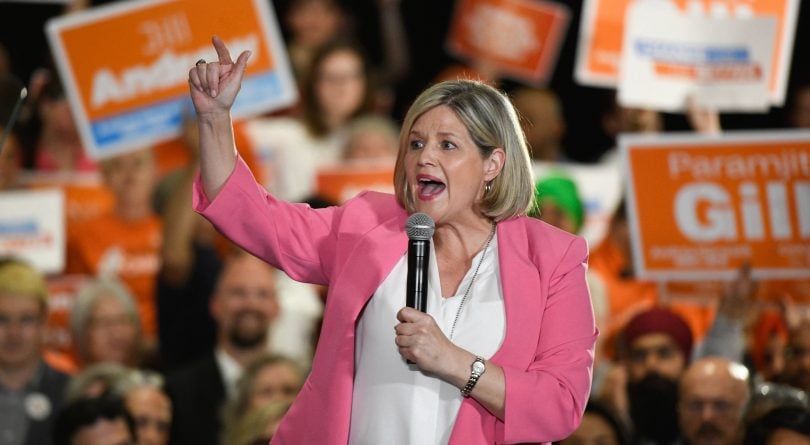 Provincial NDP leader Andrea Horwath delivers a speech to supporters at an NDP rally in Brampton, Monday, May 21, 2018. THE CANADIAN PRESS/Galit Rodan

Mark Milke is author of Tax Me I’m Canadian! A Taxpayer’s Guide to Your Money and How Politicians Spend It.

“Elections are no time to discuss serious issues,” said former prime minister Kim Campbell in the midst of the 1993 election campaign. (Campbell, and the Progressive Conservative government she inherited from Brian Mulroney, would go on to lose the election in a wipeout, winning just two seats.)

Campaigns for public office are precisely the time to discuss such matters, but I understand why politicians are loath to dive into specifics while vote-seeking: facts might contradict their own unsupportable platform assumptions.

The latest example is playing out in the Ontario provincial election. NDP leader Andrea Horwath’s platform demands that “the wealthiest people…pay their fair share” of tax.

WATCH: Why a simple math mistake (and Bob Rae) could cost the NDP the Ontario election

Horwath’s assumption is that higher-income Ontarians do not now pay their fair share. She proposes higher income taxes on that group. But let’s examine her assumption with clear data that address the true, relative tax burdens for Ontarians by income level.

The data comes from my own 2017 study for the Canadian Taxpayers Federation, Who Pays Income Tax? The data is from the CRA and includes all income tax paid for the 2014 tax year (the most recent year available when I wrote the study).

Here’s what I found for Ontario by tax filers and Ontario provincial income taxes paid, for 2014:

READ: Andrea Horwath makes her play to displace the Liberals among Ontario’s left

One response to this is that income tax collections do not tell the whole story.

After all, Ontario has a provincial sales tax (included in the Harmonized Sales Tax) and Ontario health premiums.

True, but the health premiums cost nothing at lower levels of income (under $20,000) but progressively more the higher one’s income. As for sales taxes, the same dynamic applies; Ontarians receive sales tax credits when they file their income tax returns, where low and moderate income tax filers get a break.

Back to Horwath: The NDP leader’s plans for higher income taxes (another 1 per cent higher at $220,000 and 2 per cent more over $300,000) will push Ontario’s top marginal rates to 55.43 per cent, higher even than the present highest marginal rates in the country, in Nova Scotia (at 54 per cent).

By the way, break out those who earn $250,000 or more in Ontario and we see they constitute 1 per cent of all Ontario tax filers. Their share of all income in 2014 was 12 per cent. They paid 26.5 per cent of all provincial income tax.

That Horwath thinks higher-income earners do not already pay their “fair share” says much about her motivation: class warfare, not reasoned analysis of the tax system.

The big picture: When 3.3 million Ontarians pay nothing in provincial income taxes and little in health care premiums and sales taxes, here’s another way to look at yet another eat-the-rich tax proposal: Middle-income and higher-income Ontarians already pay for most of the cost of the government in Ontario.

“Low-income Ontarians get a great, tax-free deal for the cost of government” is not a campaign plank with which a political party based in class warfare rhetoric would be comfortable.

But it happens to be a clear fact.