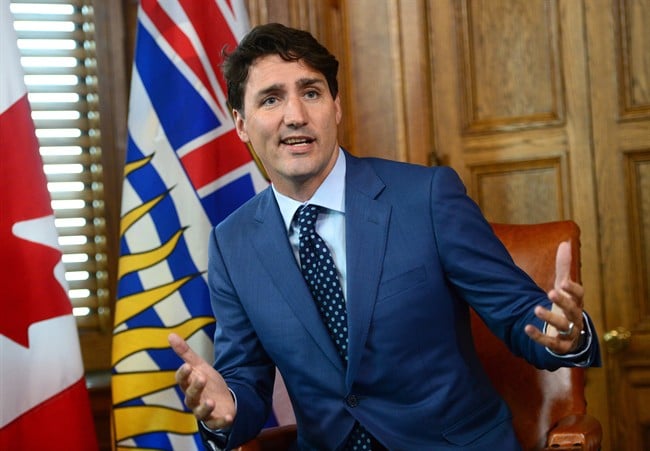 Prime Minister Justin Trudeau speaks as he meets with Premier of British Columbia John Horgan in his office on Parliament Hill in Ottawa on Tuesday, July 25, 2017. THE CANADIAN PRESS/Sean Kilpatrick

OTTAWA – Any renewal of the North American Free Trade Agreement will have to include a fair process to resolve disputes, Prime Minister Justin Trudeau said Tuesday.

In the summary of its objectives in the renegotiation of NAFTA, the White House signalled last week that it wants to entirely eliminate the chapter 19 dispute resolution mechanism.

Rather than relying on the courts to sort out disputes, chapter 19 establishes binational panels to determine the legitimacy of a country’s decision to impose countervailing duties or anti-dumping measures on imports it deems to be unfairly priced or subsidized.

OPINION: Where Canada should draw a red line with Donald Trump on NAFTA

The appeal is heard by panels of experts appointed by the two countries in question, and their decision is generally binding.

The White House argues the panels have ignored relevant U.S. laws when making their decisions and believes the courts are the better option for ensuring U.S. interests are protected.

But Trudeau said Canada will demand that a dispute settlement process remain part of any rebuild of NAFTA.

Some analysts believe Canada may draw a line in the sand over the issue but Trudeau didn’t go that far Tuesday.

The first round of NAFTA renegotiations will take place Aug. 16-20 in Washington, D.C. President Donald Trump campaigned on a promise to improve NAFTA or pull out of it and in May the White House served official notice of its intention to reopen the agreement.

U.S. law requires a list of objectives be made public prior to the start of talks. Canada has no such requirement and has been far less specific about what it wants when it comes to the agreement.

Foreign Affairs Minister Chrystia Freeland has said in the past that sections on the environment and labour would be ripe for discussions without much detail about what Canada is going to demand.

Chapter 19 has resulted in a number of positive trade decisions for Canada including on softwood lumber. Even though softwood lumber is not included in NAFTA, the chapter 19 process can still be used to appeal duties applied to it.

The U.S. Lumber Coalition, which asked for the import duties which were imposed on Canadian softwood lumber products this year, wants chapter 19 eliminated, calling it an constitutional violation because it gives the power to a NAFTA panel rather than the U.S. courts to decide appeals.

“The binational panel review system established by Chapter 19 of the North American Free Trade Agreement deprives U.S. industries and workers of their right to a fair and impartial hearing in trade disputes,” the coalition says on its website.