B.C. boomers have lost their moral authority to judge Millennials 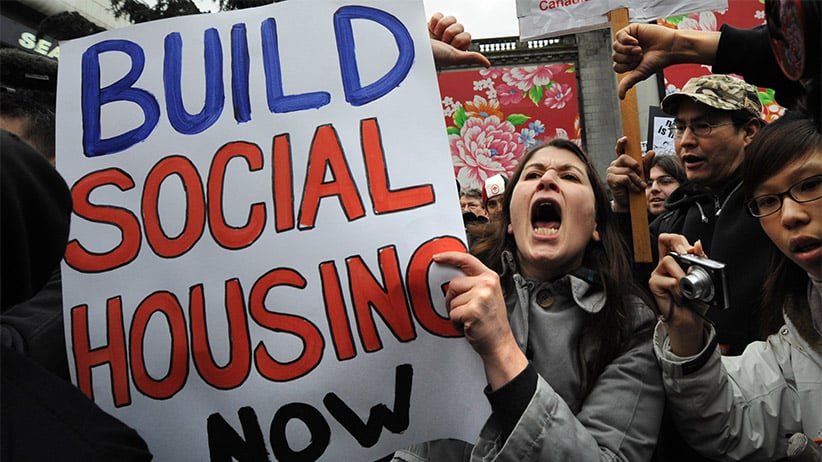 People shout slogans for social housing as they attend an anti-Olympics rally in central Vancouver, BC, Canada on February 12, 2010. (Yuri Kadobnov/AFP/Getty Images)

For years, we have been hearing about the entitled nature of Millennials. The story goes that those born in the ’80s and ’90s grew up on participation awards and inflated self-esteem. They were told that the world was their oyster and that they should follow their passion. The cautionary tale, of course, is that this set of values came at the expense of building the grit and work ethic that their elders had. Whenever someone in the younger generation complains of accessing affordable housing, or poor economic prospects, the comments section blasts their entitlement, lack of work ethic and realism, and points disapprovingly to the fact they can afford a flat-screen television and an iPhone.

But this past week has given us a prime example of why this narrative is so galling to the Millennials. British Columbians were greeted with the new property assessments. Property owners—largely generations senior to Millennials—saw their property values soar by hundreds of thousands of dollars. Suddenly, the $570 homeowners grant or HoG—a property tax subsidy whose full value was restricted to homes under $1.2 million—was in question for a number of newly minted millionaires. The media covered senior citizen homeowners worried about where the $570 would come from, some claiming they would need to move if the ceiling were not raised. Within days, provincial politicians were assuring these millionaires that the grant threshold would rise to $1.6 million. Crisis averted.

To understand why Millennials would rightly feel that this is a moment where senior generations lost whatever moral high ground they once had, we must compare this episode with a file that impacts Millennials.  For about 15 years, the B.C. Liberals have been crying poverty when it comes to improving supports for the young. They presided over an unprecedented increase in university tuition, including moves to increase tuition by over 300 per cent in the most job-oriented fields of study: law, medicine, teacher education, M.B.A.s. Baby Boomers received highly subsidized degrees in those fields. Millennials are expected to pay the full freight, or nearly so. Add to this story the fact that if you need a loan for school, you must first prove you don’t have the financial resources to pay yourself. Provided you meet that standard, your loan carries a fixed-rate option of prime plus five per cent once you graduate from school.  Students have been advocating tirelessly to improve this deal. They have had precious little to celebrate as a result of their efforts.

Now, let’s turn back to the plight of the millionaire homeowner. Take the case of the 60-year-old homeowner who has lived in their house for 30 years—the very people that politicians are trying to protect when they increased the homeowner’s grant (HoG) from properties valued at $1.2 million to properties valued at $1.6 million.  Where progress in advocacy on student issues is measured in years, their progress was measured in hours. Homeowners deserve to stay in their homes, after all. Given that the benefit is not connected to income or any means test as student loans are, Millennials can conclude that the B.C. Liberals believe that somehow even the wealthiest of homeowners deserve a handout, too. While the B.C. NDP was a bit more nuanced in its position, this was a decision welcomed by both major provincial parties in B.C. and by city politicians. This was all on the premise that those who got into the property market a long time ago and have had an unprecedented gain in their net worth wouldn’t be able to afford the property taxes that come with their windfall.

This position conveniently ignores another program that also assumes that those who cannot afford the carrying costs of their homes need government assistance. The B.C. Property Tax Deferral program allows anyone over 55 to defer their taxes and pay an effectively fixed simple interest rate of 0.7 per cent. While many seniors quite justifiably rely on this program to make ends meet on a fixed income, there is no means test for this program. B.C.’s most famous billionaire, Jim Pattison, would qualify. What impact does this have in dollars and cents? $10,000 in unpaid principal under the property-tax-deferral program costs the homeowner $700 in interest over 10 years. Meanwhile, $10,000 in unpaid principal under the student loan system costs the graduate $11,800 in interest over 10 years. Is this fair?

Rather than ensuring that millionaires can afford the property tax on their homes, the HoG simply reduces the amount homeowners need to borrow to avoid the cash flow problems caused by their windfall.  Even when homeowners borrow, they do so at a tiny fraction of the cost of student loans. Despite this fact, we had massive political pressure to solve the “crisis” homeowners face because of the appreciation of their properties.

As nearly all homeowners are receiving this grant, those that are getting the short end of the stick are those who don’t own homes. A non-trivial proportion of this category are Millennials who are working their way up toward homeownership and who have been told to lower their expectations about what they “deserve,” especially when it comes to living near where they grew up.

The $820-million HoG program could be put to better use. Lowering student loan rates would be an option. A $1,000/yr grant for every child in B.C. would be another—as that’s the approximate cost of the current HoG. There are any number of programs that would be a better use of this money, but it would take a political magician to navigate a change without losing too much support from older voters.

In all this, though, we have a deeper unexamined and very valid policy question. Should government be in the business of keeping seniors in homes they cannot afford? Seniors who can’t afford to keep million-dollar homes have options. They can take a renter, they can downsize, they can take out a reverse mortgage. At a personal level, it is challenging to give up the family home. It isn’t the fault of the senior that their once-modest bungalow in the burbs is now a hot commodity. That said, for every story of a senior worried about staying in their family home, there is a story of a young person unable to find adequate housing and even the odd tale of couples living in vans. In many cases, the seniors defending their entitlement to stay where they have been living for years involves a single person or a couple living in a four- or five-bedroom home. This is not so much about having adequate housing as it is about staying in preferred housing. Being priced out sucks. But seniors get help when they get priced out, while young people who argue that there should be better options for them, even if they don’t have a million dollars, get labelled as entitled.

But the situation is far more intertwined even than the above analysis suggests. A major strand in the Vancouver housing affordability debate has been about why housing is so astronomically expensive. The culprits boil down to lack of supply, no new land, increasing population and foreign investment. For most of the past several years, the B.C. government has explicitly avoided doing anything that might cause a decline in home values. We were apparently supposed to celebrate the windfall that foreign capital flows had on our markets. Again, this was a policy direction aimed at funding the retirements of Boomers at the expense of the future of Millennials, or as one B.C. MLA told me, this windfall can be used by Boomer parents to help out their kids. Many will and some won’t, but what this MLA was unwittingly endorsing was the move away from meritocracy and toward the creation of a landed gentry: if your parents were lucky enough to win the property lottery, you can hope for a piece of it.

The first problem to tackle is the influence of global capital inflows on distorting the housing market—some moves have been made, but more is needed. We also need to increase the pace of densifying the core neighbourhoods in B.C.’s cities, despite pushback from those in the Boomer generation who want their neighbourhoods to remain largely unchanged.

While it is essential to address the above issues, we should be evaluating why we use tax dollars to forestall seniors from downsizing. There is good reason to support seniors to have adequate housing, but is there a compelling reason to make it a spending priority of government to ensure that seniors continue to live in large and largely empty houses if they can’t afford them?

Housing turnover is what creates supply in the highly constrained market of single-family houses. Government interventions that reduce the pool of sellers has an inflationary impact on prices. Public policy has to balance the needs of all citizens and currently the upcoming generation is paying into programs that help freeze them out of finding adequate housing. The policy ecosystem has become unbalanced. In the ’70s, when seniors’ poverty was far higher, and the housing markets were connected to local incomes, the existing policies made some sense. Presently, however, Canadian seniors have a low income rate that is approximately half that of working age Canadians. The problem of seniors needing to downsize doesn’t seem as important as that of young families who face inadequate and/or crushingly expensive housing. Even if these two issues are equally important, that suggests that government should not be redistributing funds from the younger generation to the older generation to keep them in their houses, as they are doing now.

It is no wonder Millennials are galled whenever they hear their elders trot out the tired line that Millennials are entitled. Watching those same elders protect their HoG entitlement while they gradually dismantle the supports that helped them in their youth demonstrates why this characterization is utter hogwash.

Stephen Price is an educator, borderline Millennial and renter who lives in Vancouver. Follow him on Twitter here: @YVR_P.