Coronavirus is shaking up Canada's housing market, but don't expect a crash

Immigration, which drove hot markets like Toronto and Vancouver, is the wildcard 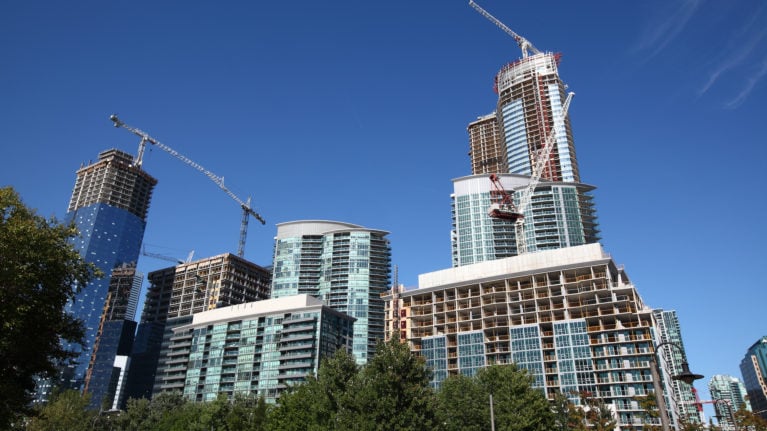 In all the conversations about Canada’s high home prices over the last few years, no one predicted that a global pandemic would finally bring them down. While prices haven’t collapsed—the average cost of a home in Canada fell by 1.3 per cent year-over-year in April—some cracks are starting to appear. Last month, home sales fell by a record 57 per cent, while month-over-month prices declined by 10 per cent. Last Friday, Evan Siddall, CEO of the Canada Mortgage and Housing Corporation, told the House of Commons’ finance committee that prices could fall by between nine per cent and 18 per cent from their pre-COVID-19 levels over the next 12 months.

Naturally, this has a lot of people worried, from retirees who planned to fund their golden years with the equity in their homes to new homebuyers who may end up with a depreciated asset. A decline in sales and prices will also have a big impact on banks, furniture stores, construction companies and others that rely on home purchases to make money. Even though the International Monetary Fund was telling Canadians in 2015 that our housing market was 20 per cent overvalued, with average housing prices rising by 56 per cent over the last decade—and 90 per cent in Toronto and 117 per cent in Vancouver—the warnings were easy to ignore.

At the same time, there are people who are hoping prices will fall. Many Canadians have been waiting for a decline, whether it’s first-time homebuyers who have had trouble getting into the housing market or those who have had their eye on their so far unaffordable dream home. They’re wondering if their big homebuying moment is about to arrive. So what’s really going on with the housing and market and what does it mean for you?

READ: After months inside, this is what “home” means to Canadians

The reason why housing prices didn’t plummet in April, despite sales dropping by more than half, is that supply and demand declined together, says Marc Desormeaux, a senior economist at Scotiabank. While people weren’t selling homes, no one was buying either. If demand fell, but supply stayed the same then you’d see housing prices drop. “It’s a different situation when one side of the market is disproportionately impacted,” says Desormeaux. “But here both supply and demand grinded to standstill at the same time.”

So what happens next? If homebuyers sell because they need to shore up some cash—to help fund retirement, or because they can’t afford their home anymore—then you could see a flood of houses come to market. However, with more than three million people losing their jobs over the last two months, and with many more workers wondering if they’ll be next, potential buyers may decide that spending money on movers, land transfer taxes and new furniture can wait.

There’s another wild card in all of this: immigration. One of the reasons why Toronto and Vancouver have seen their markets soar is because a lot of people want to move to these locales, both from inside and outside of Canada. In 2019, a record-setting 341,000 newcomers came to Canada, adding to the more than 300,000 people who came to the country in 2018. Of the people who moved here last year, 35 per cent came to Toronto, while 11 per cent moved to Vancouver.

With COVID-19 closing borders and making it more difficult for people to move generally, immigration could decline significantly, which could then put supply and demand out of balance, says Desormeaux. According to Scotibank’s estimates, for every one per cent decline in Canada’s population, home prices would also fall by one per cent. That drop is on top of the bank’s prediction that housing prices would fall by four per cent in 2020. (It would have been eight per cent were it not for government programs putting money in people’s pockets.)

Ultimately, Scotiabank thinks that any decline will be short lived. It says that home prices will exceed pre-COVID-19 levels by mid-2021 and that housing markets in locales that were doing well before the pandemic, such as Toronto and Vancouver, will rebound faster than other cities. In its report, it says that fears about a housing correction are misplaced. “There is no doubt that housing market activity is slowing dramatically at the moment, but the empirical analysis … suggests this decline in activity will be temporary, and that only a very modest decline in prices might result from this.”

Is it time to buy?

Of course, discussing the direction of housing prices is a fool’s errand—many smart people have predicted wrongly before. And there are many other direr estimates floating around. DBRS believes that housing prices could drop between 10 per cent and 15 per cent through 2022; Moody’s thinks prices will fall by 10 per cent from pre-coronavirus levels to mid-2021, at which point prices will start to rebound.

Robert McLister, founder of mortgage rate comparison site Ratespy.com, says that where prices go also depends on so many other hard-to-predict factors, such as how many businesses will fail, how many of those furloughed workers will end up permanently laid off, how many people will be forced to sell after mortgage deferrals and government subsidies end and more.

So, with all that said, is now a good time to buy or sell? If a buyer can hold on for a little longer, then they may be able to buy at a better price as the pandemic continues to work its way through our economy, says McLister. But don’t expect a half-off fire sale of a deal. “Short of thermonuclear war, it ain’t going to happen in this decade on a national basis,” says McLister about prices falling by 50 per cent or another wild amount. “You can’t rule out the unforeseeable, but something like a 50 per cent selloff would wreak such devastation on the economy that the government would probably start buying homes—I say that half-jokingly.”

“If I needed a house this summer because my kids were starting school in September and I was well qualified with a long time horizon, I wouldn’t let COVID dissuade me from buying,” he adds. “But if I were a discretionary buyer without a 10-year time horizon, and I didn’t have many fallback assets, I’d let the market shake out a bit longer before jumping in.”

For sellers, it all depends on how much you need the money. If you need to take a lower price than you intended then you’ll likely find a buyer who’s looking for a deal. Otherwise, either wait a few months or stick to your price and hope to find someone who cares more about your home than its price.