Housing bubble: listening for the pop

The fact is, no one is really sure what to make of the many natural laws of housing prices

Here’s a blog post that is going to be worth exactly what you paid for it. I promise. Like the rest of you I’ve been reading a lot of “pro” and “con” material about the possibility of a Canadian housing bubble. Including the dramatic material from our latest issue. And I have a couple of problems many of you will have shared in trying to follow the debate. One, my own involvement in the housing market (and we’re all involved, on one side or the other) makes it difficult for me to set aside wishful thinking. Two: the data are awfully slippery. A lot of what we hear is anecdotal; a lot more of what we hear, even from informed sources, seems little better than anecdotal; and where there is solid information about things like debt-to-income ratios and movements in good indices of housing prices, it’s hard to interpret.

The fact is, no one is really sure what to make of the many natural laws of housing prices whose existence has been asserted and whose revenge upon us (us owners) has often been promised. Though we do now know that one formerly popular law, “Housing always goes up”, ain’t much good. (Damn. No free lunch, you say?)

What I decided to do was this: to look for some data—any data would do as long as it seemed ostensibly meaningful—that, presented pictorially, show the U.S. housing bubble happening; and then look at the same picture for Canada, using like-vs.-like information, to see if our situation looks roughly the same. In other words, the simplest, dumbest analysis you can imagine, but performed, at any rate, without prejudice.

This, I think, is a pretty good picture of the US housing bubble, complete with the burst phase. 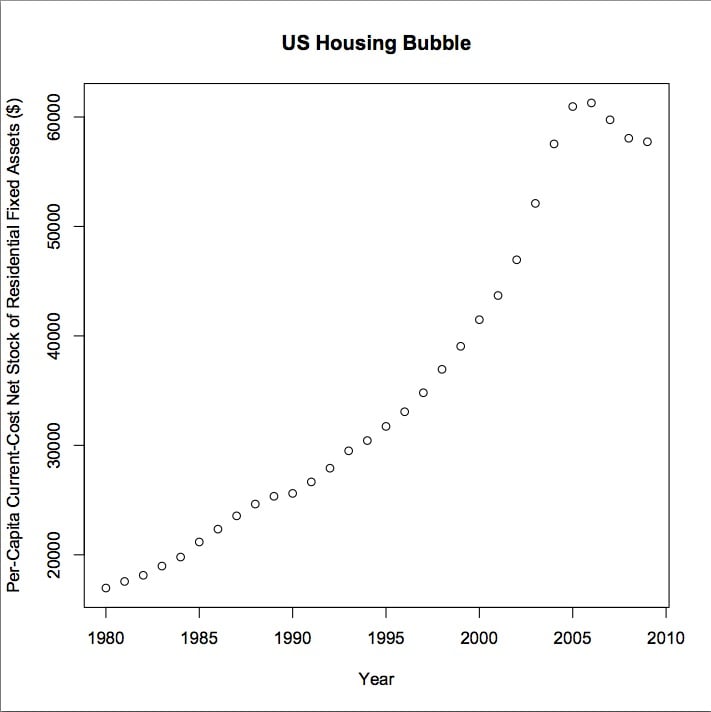 [Source: US Bureau of Economic Analysis.] “Net stock of residential fixed assets.” This is, if I understand the methodology notes right, an estimate of the total value, at the nominal prices current for each year, of American housing, without counting the land. The “old” parts of the stock are depreciated, dwindling toward zero gradually, and units are taken out entirely when they are demolished. This seems to me to be a useful measure if you correct it for population growth, as I have here, and as so many “anecdata” about rising home prices don’t. It tells a story that we would expect to have seen, and doesn’t treat a brand-new home as equal to a 50-year-old one.

I’m sure there are 20 different important problems with using this as an indicator of “bubbliness”. (If you can name some of them it would be useful for you to put them in the comments.) But the bubble is certainly there, popping in 2006. And if this is an indicator you’d started watching in 2002 or 2003, you’d have known enough to become worried before the catastrophe happened.

So what does Canada look like on roughly the same scale? 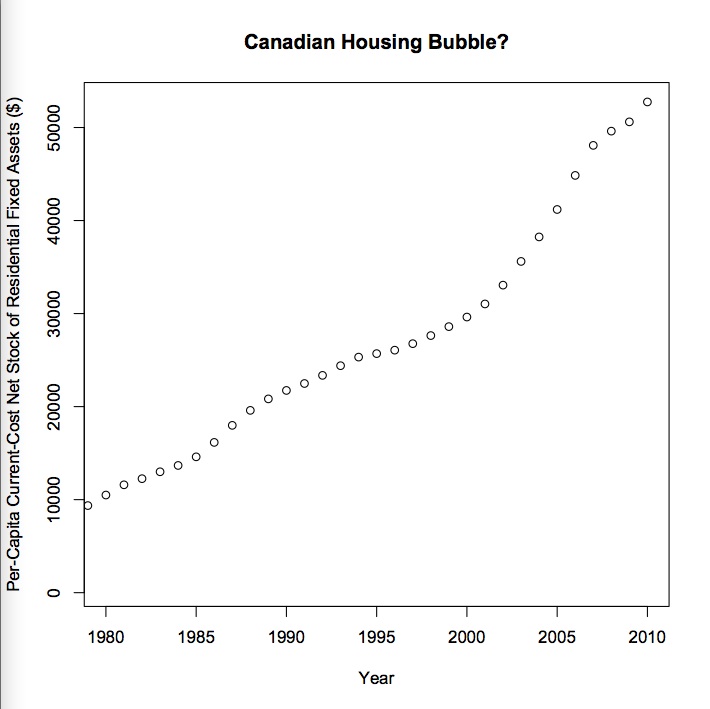 [Source: Statistics Canada.] It’s a good-news bad-news picture when you compare it to the American one. In the U.S., the per-capita value of the housing stock got wayyyy above trend in 2003 and 2004, climbing by 22.5% in just two years. Canada never did get that out-of-control over any short period of time, by this measure. At the same time, though, we did have five consecutive years (2003-07) of 7%+ growth. The U.S. has more or less reverted to trend, and we haven’t: we’ve merely cinched in the growth rate (working against the allure of cheap mortgages as best we can by means of lending policy) and hoped that no radical adjustment will be necessary. A few years of slow growth would be excellent news for us, given that the alternative might be the more-or-less wholesale destruction of entire conurbations that has been happening in the U.S.

I don’t think there is much doubt that Canada may have some local bubbles. If you look at the data for British Columbia, for example, you find that the Olympics combined with the general climate of insanity from 2003-06 to drive 9%+ growth for the whole province every year, with a peak of 11.3% in 2006. But then, as top economist Steve Pomeroy recently pointed out in The Mark, we know that was a bubble because it already popped in the faces of naïve buyers: with the market awash in Olympic housing, the per-capita residential asset stock stalled in 2008 (+0.5%) and dropped in 2009 (-1.1%). Harm that has already been done, and that is therefore behind us, is good news for those who fear the Condopocalypse.