Even localized housing bubbles can have national consequences, but Canada has no regulatory body capable of addressing them 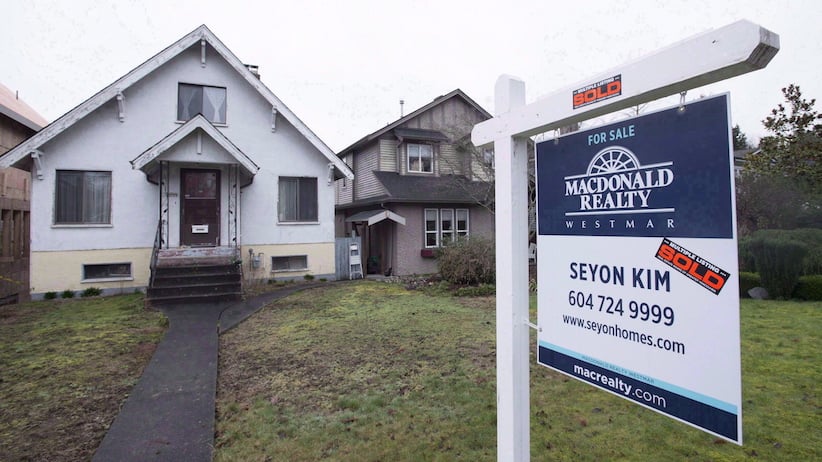 A sold home is pictured in Vancouver, B.C., Thursday, Feb. 11, 2016. Canada Mortgage and Housing Corporation says there is mounting evidence that house prices in a number of Canadian cities are out of whack with incomes and other economic fundamentals.The latest report from CMHC says there is evidence of overvaluation in nine of the 15 real estate markets included in the research. THE CANADIAN PRESS/Jonathan Hayward

Vancouver’s flirtation with irrational housing exuberance has become one of the bigger stories of 2016. In February The New Yorker profiled the super-rich kids of the Chinese billionaires and millionaires who are either partially, mostly or wholly responsible for driving the price of an average home in Canada’s third-biggest metropolitan area to more than $1 million. A month later, The Walrus published an article that focused on the perverse effects of surging home prices and stagnant median incomes. Maclean’s this month delivered perhaps the most definitive account of the situation to date, taking the time to explain that Vancouver real-estate prices are subject to forces that go beyond supply, demand and gorgeous views. Last week, Benjamin Tal, an oft-cited economist at Canadian Imperial Bank of Commerce, kept things going with a note on what could be done to restrain international demand. Tal has put more effort into studying Canada’s housing market than many of his counterparts on Bay Street. In recent years he has explained thoughtfully why Canada’s real-estate boom is different than what occurred in the United States in the years ahead of the financial crisis. Anyone who took his advice and ignored the boomlet in bets on a Great North housing bust is better off for listening. Canadian real-estate prices are being driven by local conditions, making a national calamity of the type that afflicted the U.S. highly unlikely.

So now Tal is digging into those local conditions. His note last week was a reminder that plenty of cities have become a diversification play for extraordinarily rich Asians. (The New Yorker could just as easily have profiled the super-rich Chinese kids of Sydney or London or Los Angeles.) What is unique about Vancouver’s real-estate bubble is the unwillingness of the authorities to do anything about it. Governments in Australia, New Zealand and the United Kingdom all are trying to slow the rush of international capital into local housing markets. Since last year, the only way a non-Australian can own a home in Australia is to redevelop an existing property or build a new one; the individual must also promise the home will be for personal use. New Zealand and the U.K. have both introduced new taxes on capital gains from property.

Tal wrote that at the very least Vancouver (and possibly Toronto) could tax “flipping” by international buyers. “We don’t know how big it is, but we know it’s not constructive,” Tal said of what amounts to speculation. “Applying a flipping tax on foreign investors might be a step in the right direction. It won’t solve the problem, but it might be an effective way to remove the most problematic element of foreign investment in Canadian real estate.”

The remarkable thing about all the reporting and analysis of the Vancouver housing market this year is its consistency. Everyone comments on how authorities such as Canada Mortgage and Housing Corp. only now are starting to gather data on the extent to which international buyers are responsible for the price escalatio—an inexcusable example of bureaucratic inertia and old-fashioned Canadian complacency. Writers and commentators present entirely logical arguments for why a tax or a regulation aimed at levelling the playing field between regular homebuyers and the world’s ultra-rich would be an entirely reasonable response to what clearly is an unusual situation. The reports also dutifully present the self-serving counterpoints of real-estate agents and contractors, who say restrictions would cause the market to buckle, unfairly hurting seniors who are counting on the value of their homes to finance their retirements. Advocates for excessive home prices also point out that construction has become a bigger part of the British Columbia economy, equating any effort to deflate Vancouver’s housing bubble to act of economic sabotage.

Missing from the analysis is any mention of the fundamental flaw in Canada’s regulatory system that allows the debate about Vancouver’s housing market to persist without resolution. In 2013, the International Monetary Fund called on Canada to create a federal entity with a clear mandate to monitor threats to the financial system. The IMF earlier this month scolded Ottawa for so far ignoring its advice.

The Vancouver house-price surge is exactly the sort of thing the independent agency should handle. It is a national issue: everyone knows who will be called on to clean up the mess if it bursts. The banks would feel it and likely would curb lending. CMHC would feel it because it has insured most of the mortgages Vancouverites have used to buy their inflated assets. The only ones who wouldn’t feel it would be the rich Chinese whose goal simply was to collect assets outside the reach of their government.

The term that has been adopted for such oversight is macroprudential regulation. The U.K. takes it so seriously that it invested the Bank of England with the power to deflate any asset-price bubbles that it identifies as threats to the financial system. In Canada, macroprudential policy rests with a group of senior officials in Ottawa called the Senior Advisory Committee. It meets in private and—we’re told—advises the government on what it should do at any given time.

The government is free to ignore this advice, as former prime minister Stephen Harper apparently did ahead of last year’s election. The recent reporting about Vancouver suggests the pressure on politicians to leave housing market alone is intense. The New Yorker noted that even Prime Minister Justin Trudeau has indicated caution in doing anything that would affect the price of many households’ most valuable asset.

This is precisely why an independent macroprudential regulator is so important. Ideally, it would have the power to defuse risks without first having to seek permission from a politician, just as the Bank of Canada sets the benchmark interest rate without input from finance minister. But if that is too much power for governments to yield, then a neutral body could at least identify threats and offer neutral advice on what to do about them. The debate could then take place in Parliament in something closer to real-time, rather than in the pages of magazines after it may already be too late.