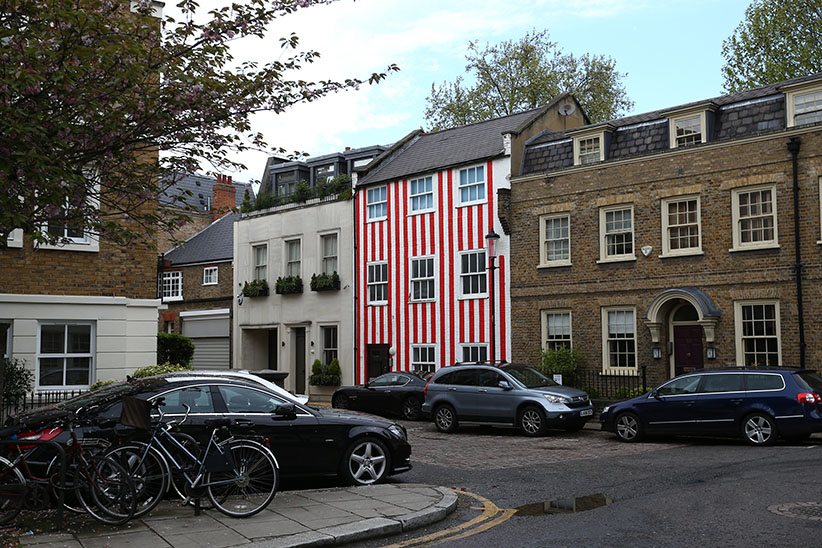 At a recent summer party in Notting Hill, guests milled around a freshly renovated house, spiffed up to high spec and on the market for a cool $91 million. Upstairs, the house was a traditional Victorian mansion fit for a large family of aristocrats—grand, airy and palatial by London standards, as well as being directly across from one of the prettiest communal gardens in the city. But it was the newly dug three-storey basement that had the guests buzzing. Below the cinema, gym and spa (complete with sauna, pool and massage table) sprawled an enormous six-car garage. But how did the vehicles get down there? Our host, an American who worked in finance, was only too happy to demonstrate: The cars were lowered down by a custom-built automobile elevator built into the parking pad in the side garden. “I think I’ve found a Chinese buyer,” he said. “He wants all the furniture and art, as well, which is great.”

Welcome to the world of iceberg houses, the latest (and possibly final) frontier in high-end London real estate. For the past several years, the vogue for sprawling subterranean space has taken the city’s super-rich by storm. In upscale neighbourhoods such as Belgravia, Mayfair, Regent’s Park and Chelsea, there are entire streets taken over by diggers and excavation teams, tunnelling down to build a city beneath the city, where the world’s wealthiest people can hide and have their cuticles trimmed. In some cases, these basements are so huge, they double, or even treble, the property’s land mass—a clear advantage in a city where square footage is at a premium and real estate values have risen sharply over the past quarter-century. In the so-called “land bank” of London property, an iceberg basement is the ultimate must-have, both a status symbol and a solid investment.

But it looks as though the era of underground sprawl may be drawing to a close, as an increasing number of London boroughs pass legislation to curtail the construction of basements deemed to be “extreme” and disruptive to the surrounding neighbours. Excavations are often noisy, dusty and almost endless. They also run the risk of compromising foundations and party walls. Late last year, Kensington and Chelsea limited basement renovations to one storey. Neighbouring borough Westminster has followed suit.

It’s a development that’s enraged some of the city’s more house-proud squillionaires. Late last week, Zipporah Lisle-Mainwaring, a 71-year-old Kensington resident, lost her legal battle to have her historic Georgian townhouse gutted and furnished with a vast two-storey basement. After joining forces with a construction company in the hope of having the borough’s new restrictions overthrown, she lost in the high court. Lisle-Mainwaring has already made her contempt for her neighbours’ objections clear. This past spring, she painted her house in red-and-white candy stripes, in what seemed to be a clear challenge to her conservative neighbours: If they don’t want an iceberg, they will have to put up with an eyesore (though some might argue the effect is rather whimsical).

Just up the road in Holland Park, Led Zeppelin guitarist Jimmy Page has been involved in a war with his neighbour Robbie Williams (former singer of the pop band Take That) over Williams’s plans to dig under the garden of his listed Victorian mansion and build a swimming pool and cinema. After Williams’s plans were quashed by changes in legislation (as well as by Page’s angry letters of complaint), he has since revised the plans to meet the new guidelines. Page is said to be raging still, to the delight of tabloid headline-writers, e.g., the Daily Mail: “Not a whole lotta love lost between these two rockers.”

In a city where marvelling at the strange effect of mostly foreign billionaires on the cultural fabric has become a kind of acerbic collective sport, the controversy over iceberg houses has become almost mythical. Celebrities such as Joan Collins and Brian May have voiced their disgust at icebergs. And, earlier this year, a news story went around that turned out to be urban myth: Rumour had it that the diggers being used to excavate were being left for dead, since fishing them out would be more costly than leaving them buried. (The city’s major construction companies have since flatly denied the story.)

The disruption caused by basement digs are the strongest argument against what are really just obscene displays of wealth—the architectural equivalent of super-yachts. But proponents argue it shouldn’t matter, since so many of London’s super-rich are non-domiciled residents who keep a house in the British capital but only spend a fraction of the year there. As the host with the car elevator told his party guests with a smile, “The renovation went on forever, but we didn’t have too many complaints. No one really lives in this neighbourhood anyway.”