The (literal) rise of the anti-condo

Stacked on leafy buildings, floating above an alley: creative expressions of urban density are popping up in surprising places 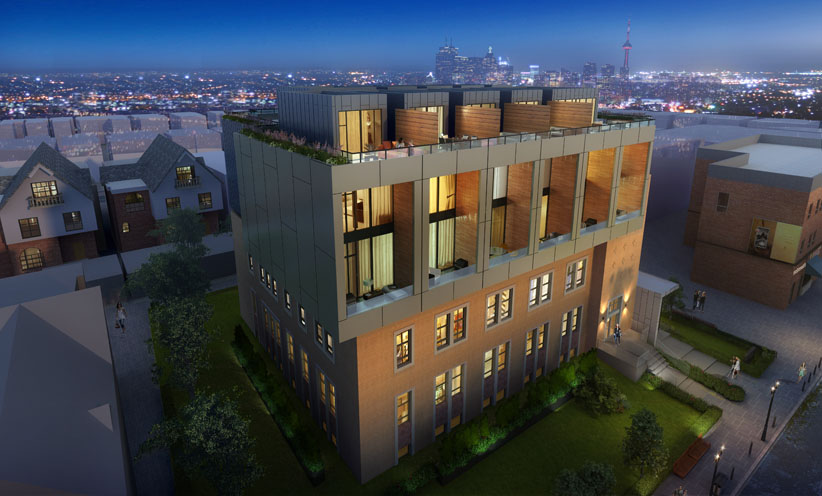 Small-scale densification: Alternatives such as tiny laneway houses and 'parasite' buildings are popping up in lieu of big-box condos. (Curated Properties)

Intensification is the mantra of today’s North American urban planners. In Canada, that increased density has inevitably come in the form of a big-box condo. Douglas Coupland dubbed Vancouver “the City of Glass.” Toronto is building more condos than New York. For many, the condo is the only route to affordable downtown living. Architects and home buyers alike still love the charm of houses, but sky-high land prices have put an end to new single-family homes in our biggest cities.

Gary Eisen and Adam Ochshorn of Curated Properties have found a creative solution to that problem. They plan to construct a dozen high-end townhouses on top of a vacant 1950s municipal office on Dovercourt Road on Toronto’s west side. Rather than try to blend into the muted brick exterior of the original, the ultramodern two- and three-bedroom townhouses will be clad in metal panels, with large, deeply inset windows that hang over the roof of the office below, so that the development has the feel of neither a loft conversion nor a glass-walled condo.

A red-hot real estate market and shifting homeowner preferences conspired to make the idea of dropping 1,500-sq.-foot townhomes atop a heritage building on a leafy residential street an easy sell. Eisen and Ochshorn have been doing developments since the 1990s, when buyers would often come in clutching brochures from competing condo projects, demanding the theatre rooms and indoor pools popular in high-rise developments. These days, local buyers are abandoning expensive amenities in favour of more living space, private rooftop terraces and access to their favourite neighbourhoods. “We get a lot of people coming in that say they don’t want to live with 500 other people and wait for elevators,” says Ochshorn.

Architecture for the other 99 per cent

The new development is playing into the trend of “creative densification,” which aims to intensify urban cores while keeping the human scale. Spurred by a growing backlash against the dominant aesthetic of concrete and steel condo towers, cities like Vancouver have legalized laneway development, encouraging homeowners to convert back-alley garages into small detached homes. The city has issued more than 1,000 permits for such miniature houses, which sit on lots as narrow as 33 feet wide and can feature as little as 500 sq. feet of living space, enough for one bedroom and one bath. The concept is more old than new. Lanehouses were popular in the 19th century as cities struggled to accommodate burgeoning populations, but fell out of favour with the advent of high-rise architecture. Toronto has been slower to hand over its alleyways. So far, the city has approved just one laneway project, also by Eisen and Ochshorn: 16 upscale units built around a converted back-alley boiler factory in the west end.

Beyond laneway houses and rooftop townhomes, the movement toward small-scale densification is embodied by the current fascination with repurposing old shipping containers into apartments and tiny houses, small movable structures that fit into the unused urban nooks and crannies. Seattle now encourages residents to build backyard cottages that serve as affordable rental housing. In Europe, architects are reclaiming scraps of urban space with “parasite structures” than attach to the sides and rooftops of buildings. Germany’s LoftCube sells 500-sq.-foot prefabricated homes designed to be assembled on existing rooftops. In Moscow, a pair of architects built their office inside a modular steel-and-plastic structure that affixes to the sides of two adjacent high-rise buildings, floating above the alleyway below.

Eisen and Ochshorn were inspired by similar adaptive reuse projects in New York neighbourhoods like Soho and Tribeca. There, developers have rejected high-rise condos in favour of stacking townhouses on historic buildings; the ground floors offer retail and office space. “It’s a nice juxtaposition between old and new and they’ve retained the flavour without killing the neighbourhood,” Ochshorn says. “Toronto knocks stuff down and builds something new that’s all glass.” Developers may still be enamoured by the economics of condo mega-towers, but little by little, the face of urban density is changing.