Priced out of Vancouver, Martin and Nicole Chiu became first-time homeowners after a spontaneous move to Calgary 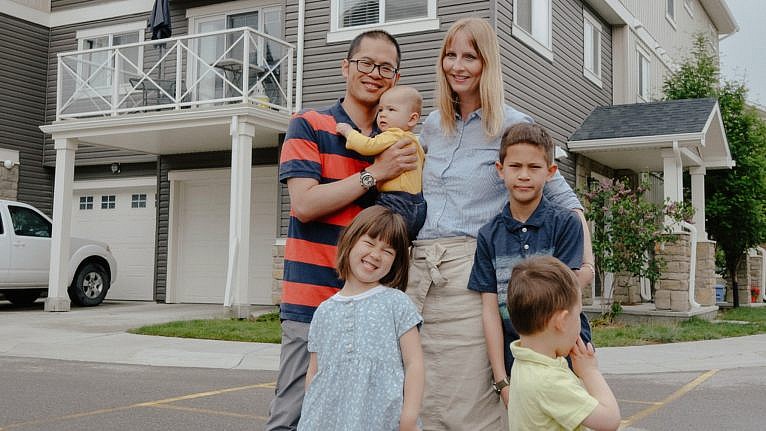 In 2011, the Chiu family moved into an East Vancouver home owned by Martin’s parents. In many ways, it was the ideal arrangement. The couple had the lower unit—a two-bedroom, one-bathroom suite—all to themselves. Plus, they could still enjoy weekly family dinners, babysitting perks (as needed), visits to Kitsilano Beach and community events hosted by their local church. But when Martin and Nicole’s third child, Nate, came along in 2019, the couple took over the home’s more spacious three-bedroom upper unit. Before they moved in with Martin’s parents, they had eyed a place in South Surrey, but Martin balked at the lengthy commute time.

RELATED: Why this family left Toronto for Kelowna

In January of 2021, a three-bedroom property across the street was listed for roughly $1.3 million. It was an older model with no garage, but the open house still drew a crowd. Martin and Nicole realized how much the neighbourhood had changed—and how unattainable homeownership would be if they stayed put. “All the cars that pulled up were Audis, BMWs and Land Rovers,” Nicole says. “We realized that even living down the street was totally out of reach.” On top of that, Nicole learned soon afterwards that she was pregnant with Clarke. They needed more room.

The couple figured they could afford to spend up to $300,000 on a three-bedroom home. Neither of them initially considered an out-of-province move, but Vancouver’s astronomical prices shifted their focus as far east as Calgary. “At first, I was like, ‘What’s in Calgary?’ ” Nicole says. “But it grew on me as we started looking at properties online.” The one-hour flight—or 12-hour drive—to Vancouver was worth it for regular visits with the grandparents. 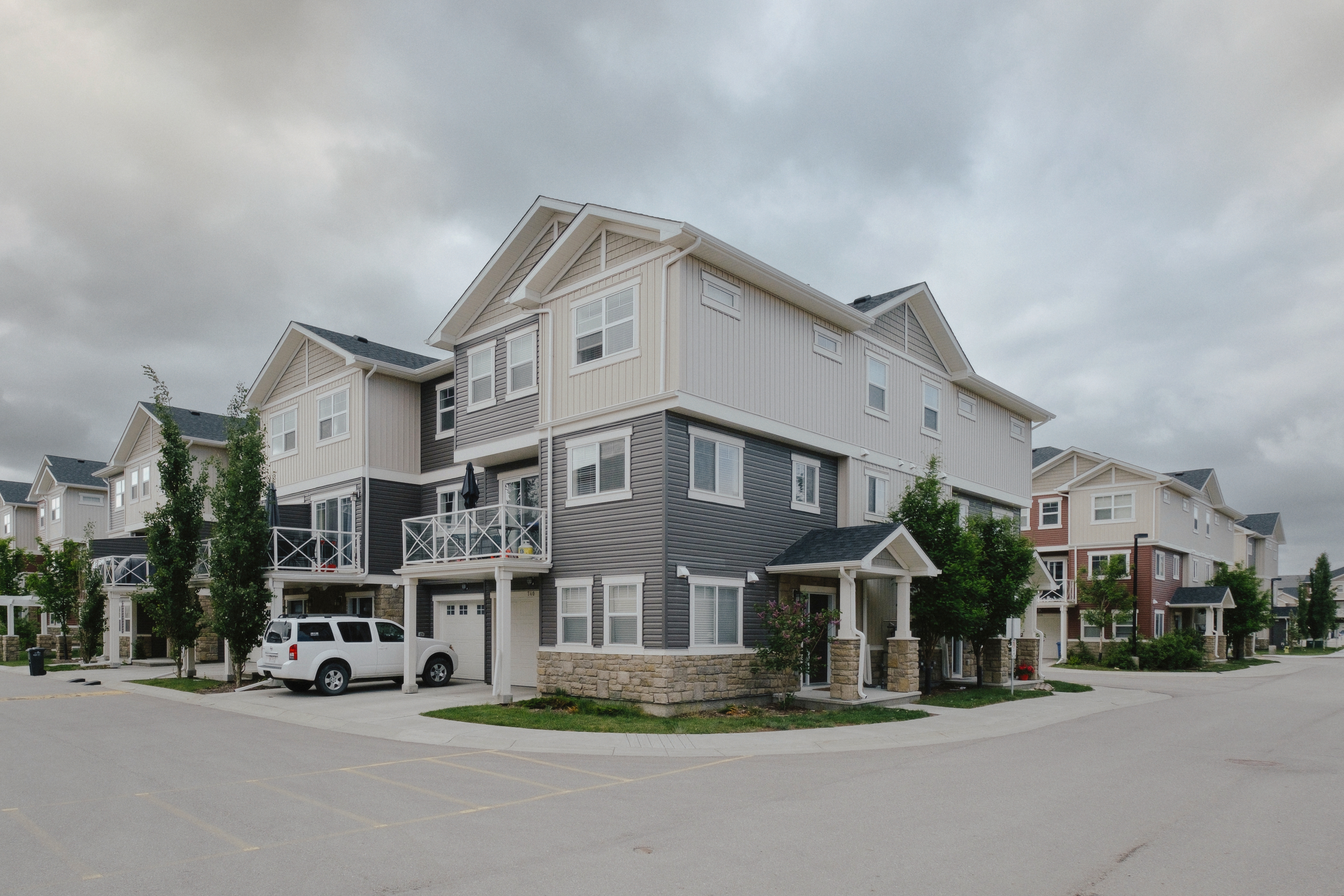 The three-storey townhouse features a ground-floor den with a kitchen, living room and powder room on the second floor.

Martin and Nicole booked flights to scope out Calgary with the kids during March Break, interspersing viewings with trips to Lake Louise and the Calgary Zoo. Their real estate advisor, Tom Kelly, showed the family eight townhouses. “I grew up in a townhouse, so I’m used to living in a community with a bunch of other families close by,” Nicole says.

The Chius initially eyed a unit in northwest Calgary with three bedrooms and a large downstairs area that could double as Martin’s office. (“Nicole joked, ‘You can do laundry while you’re working!’ ” Martin says.) Luckily for him, they found a new development on the northeast side of the city that they both liked better.

The three-storey townhouse was listed at $295,000 and was a 20-minute drive from downtown Calgary. The main entrance opened up to a ground-floor den, while the kitchen, living room and a powder room were on the second floor. The third floor had three bedrooms and two full bathrooms. It was a corner unit, so plenty of sunlight flooded in. “When we walked in, we had the immediate feeling that it was our home,” Nicole says. And there was a playground just a one-minute walk away. 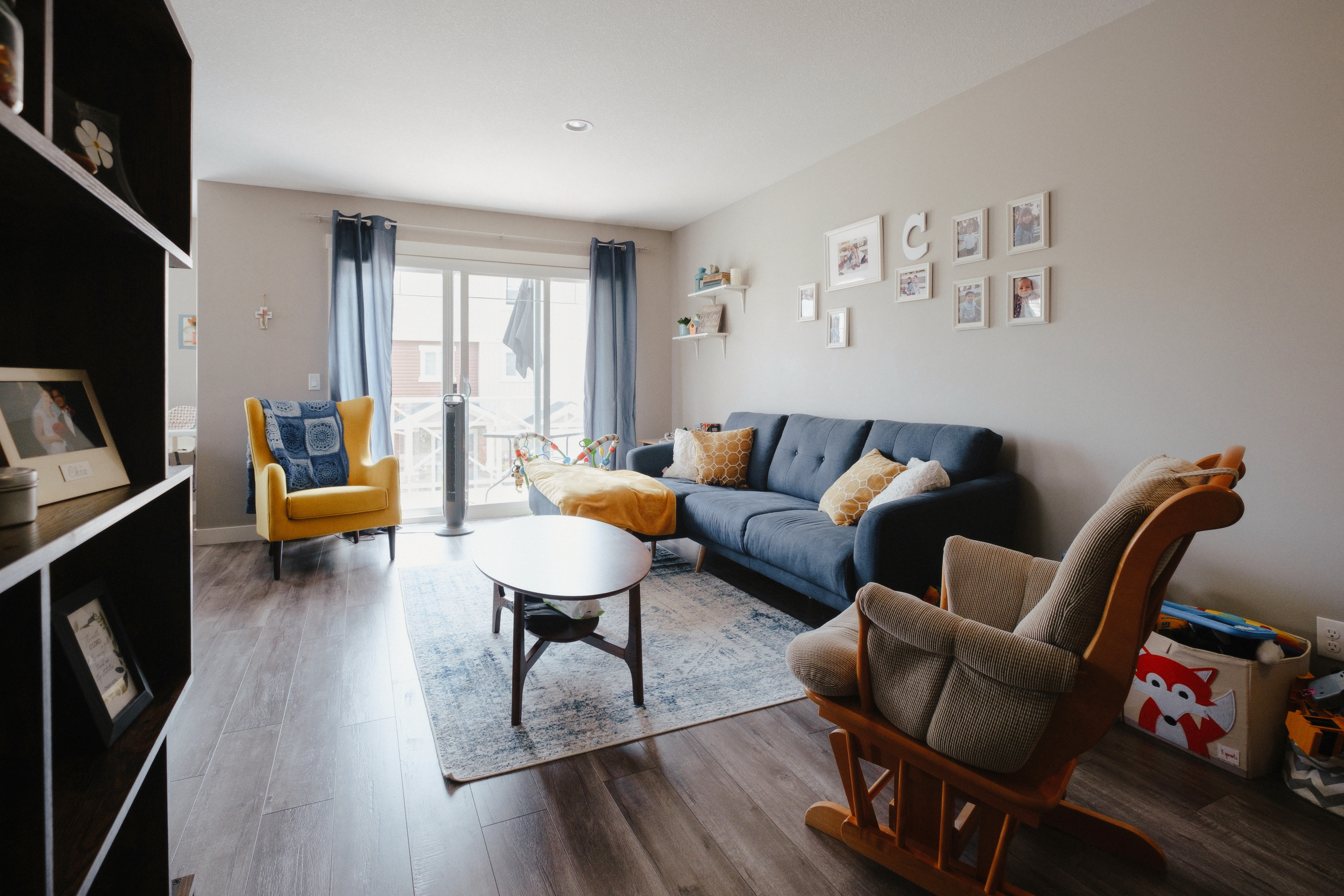 The corner unit has plenty of natural light and is only a 20-minute drive to downtown Calgary.

The couple submitted an offer of $275,000 on the same day as their viewing. After a brief back-and-forth, the owner—who had purchased a new property and was eager to sell—accepted a bid of $287,500. “We were in our hotel room, shouting, ‘Yes, we’re homeowners!’ ” Martin says.

Last June, the Chiu family packed their belongings into a U-Haul and drove east with their three kids, stopping overnight in Revelstoke. The kids were excited; Nicole, who was 20 weeks pregnant at the time, was hot. They settled in easily: the Chiu children quickly made friends with other kids in their complex, and a church in southeast Calgary even threw Nicole a baby shower. This summer, the family is planning trips to Banff, Drumheller and, once again, the zoo. (It’s a crowd-pleaser.) They still miss their family in Vancouver, Martin says. The gridlock? Not so much.