The mystery mansion near Calgary that has everyone talking

The 11,000-sq.-foot residence's front door is protected by statues of life-sized golden horses, and a golden chariot helmed by a giant winged man, also in gold 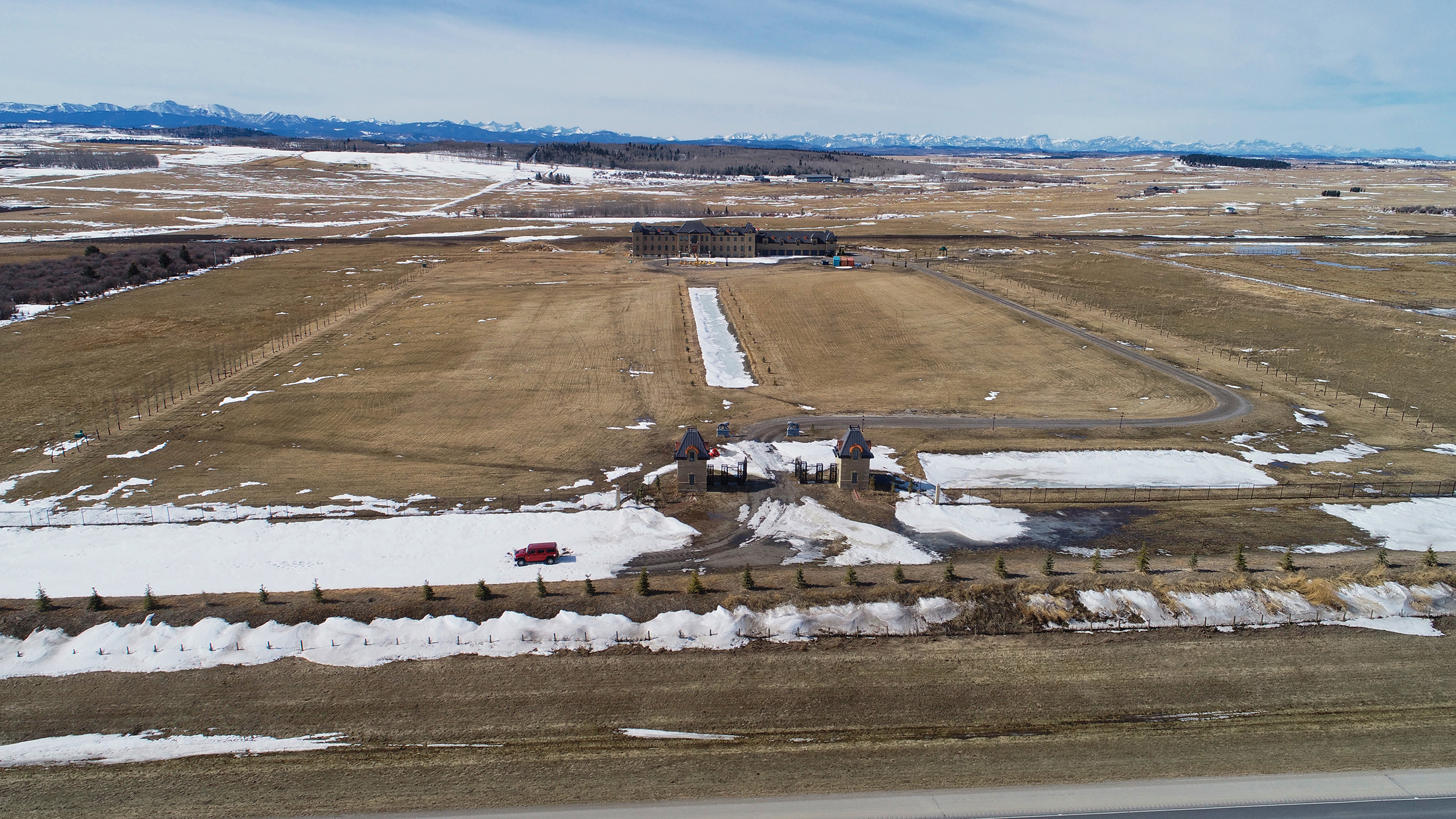 The 11,000-sq.-foot house sits next to Hwy. 22 outside Calgary (Photograph by Sam Kazerooni)

It comes out of nowhere. You’ll be driving south of the Trans-Canada Highway, through the dun-coloured foothills that run parallel to the still snow-tipped Rocky Mountains, and there it is. Bam. A monster house so grand-but-fleeting that you can’t help but ask yourself: “What was that? Some kind of hotel?”

But the 22 is a busy highway, and there is nowhere obvious to pull in to take a closer look.

Everybody in Calgary has driven by this place—now a landmark—and puzzled at it. A stone facade that matches the grey-brown of early spring grass. Scores of windows. Copper-topped roofing. A nine-car garage. Its front door is protected by statues of life-sized golden horses, and a golden chariot helmed by a giant winged man, also in gold. Only a line of unhappy saplings and evergreens shade the 32-hectare property located 35 km outside downtown Calgary. They don’t do much to shield the home from the prying eyes of your intrepid Maclean’s journalist, who shamelessly pulled onto the highway shoulder to sneak a peek through a pair of binoculars while heavy-duty trucks threatened to topple her Barbie Jeep into the ditch.

Nobody can look away from this, what must be the most polarizing and controversial piece of private real estate in all of Alberta—perhaps all of the country. Its looks have become the subject of conversation on social media, in online forums and in a particularly nasty letter to the editor to the local newspaper, the Cochrane Eagle. It’s been called an “eyesore,” “hedonistic” and, most harshly, a “grotesque and narcissistic tribute to the owner’s ego.” 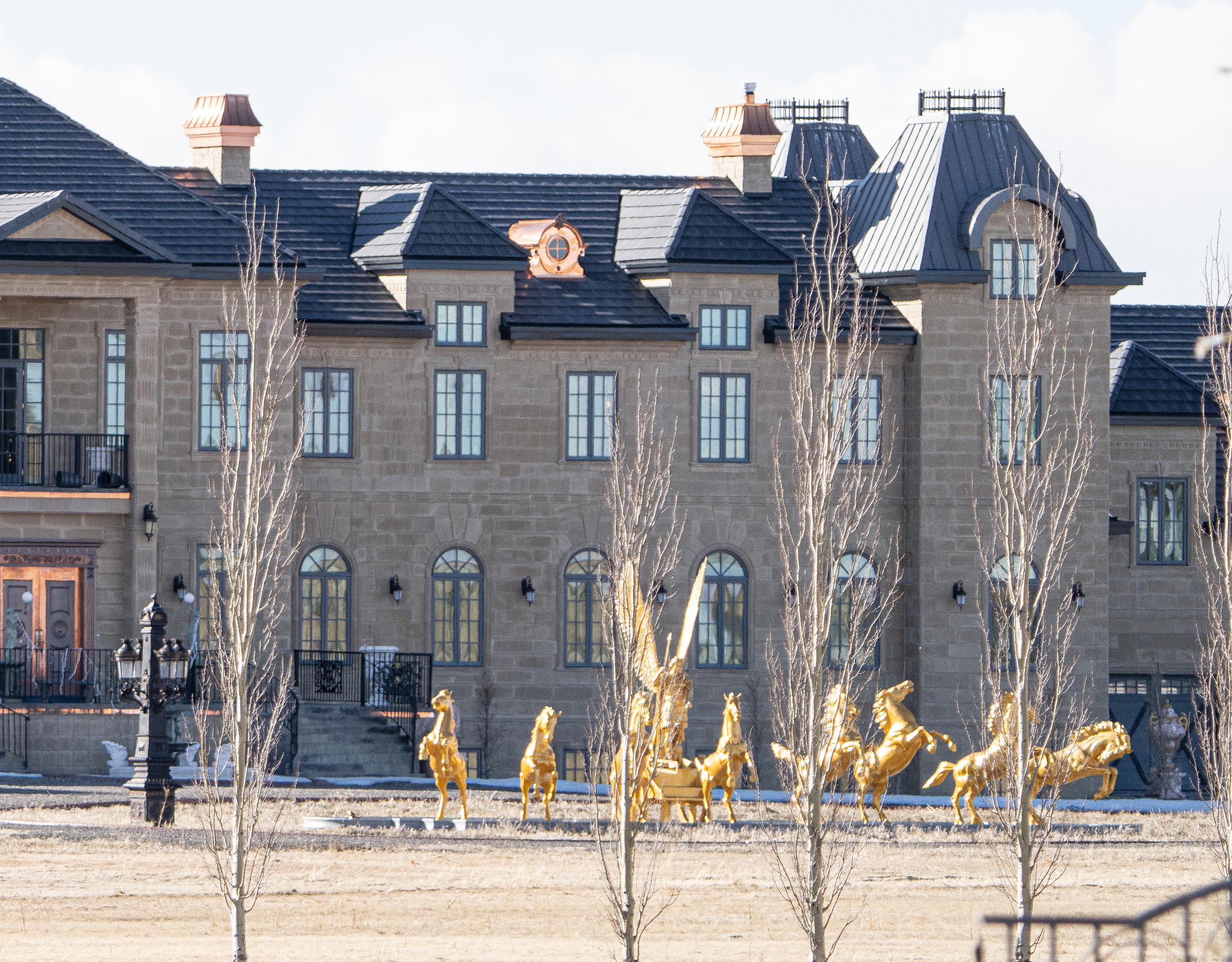 The owner of this highway manor was a partial mystery after it began construction in 2014. But the name listed on the title is Ernest Hon, whose family invested heavily in Hong Kong real estate, according to a brief profile in Alberta Venture, and immigrated to Canada in 1988, only a few years after Ernest was born. Hon was also the lead spokesperson for major residential real estate projects in downtown Calgary.

READ: Empire of Pain: The billionaire Sackler family’s role in the opioid crisis

He declined to be interviewed about the giant house when reached by Maclean’s, citing privacy concerns. I’m neither surprised nor inclined to blame him, given the backlash the home has received on social media.

It’s not just that the 11,000-sq.-foot mansion is large—this part of the world has quite a few such homes tucked away in woody groves or behind hills. Search historic real estate listings “Calgary, and area” and you’ll find plenty of stone monuments with aesthetically questionable finials: fake islands, a dressage arena, giant columns and ’90s stucco.

Nor is this house uniquely ugly. Its problem is that it is uniquely exposed. It’s too close to the highway, too poorly landscaped and too unapologetic. And therein lies the paradox of Canada’s ever-escalating quest for status via real estate.

Class is something polite Canadians avoid discussing. We think of our country as comparatively classless, and we manage the cognitive dissonance presented by the haves and have-nots of housing by requiring our rich people to keep quiet. They should wear clothes that are well-cut and well-designed, but not flash. Buy the multi-millionaire’s car, but paint it in a sedate hue. Wealthy neighbourhoods should feature winding streets with mature trees and large lots, the better to conceal the true size of the homes built upon them.

To violate these unwritten codes is to be gauche; that is what it means to be ugly. It’s why the giant house on Highway 22 grates on the optic nerves. After all, the poor don’t like to have their noses rubbed in the property they will never have. And the rich are made uncomfortable seeing their own real-estate-driven status-seeking reflected so nakedly on the side of a highway.

There’s a colonial fantasy that underpins this kind of aspirational real estate. A dream of escaping the urban crush in favour of a little house on the plain—except the house, not so little, is equipped with every modern amenity and comfort. 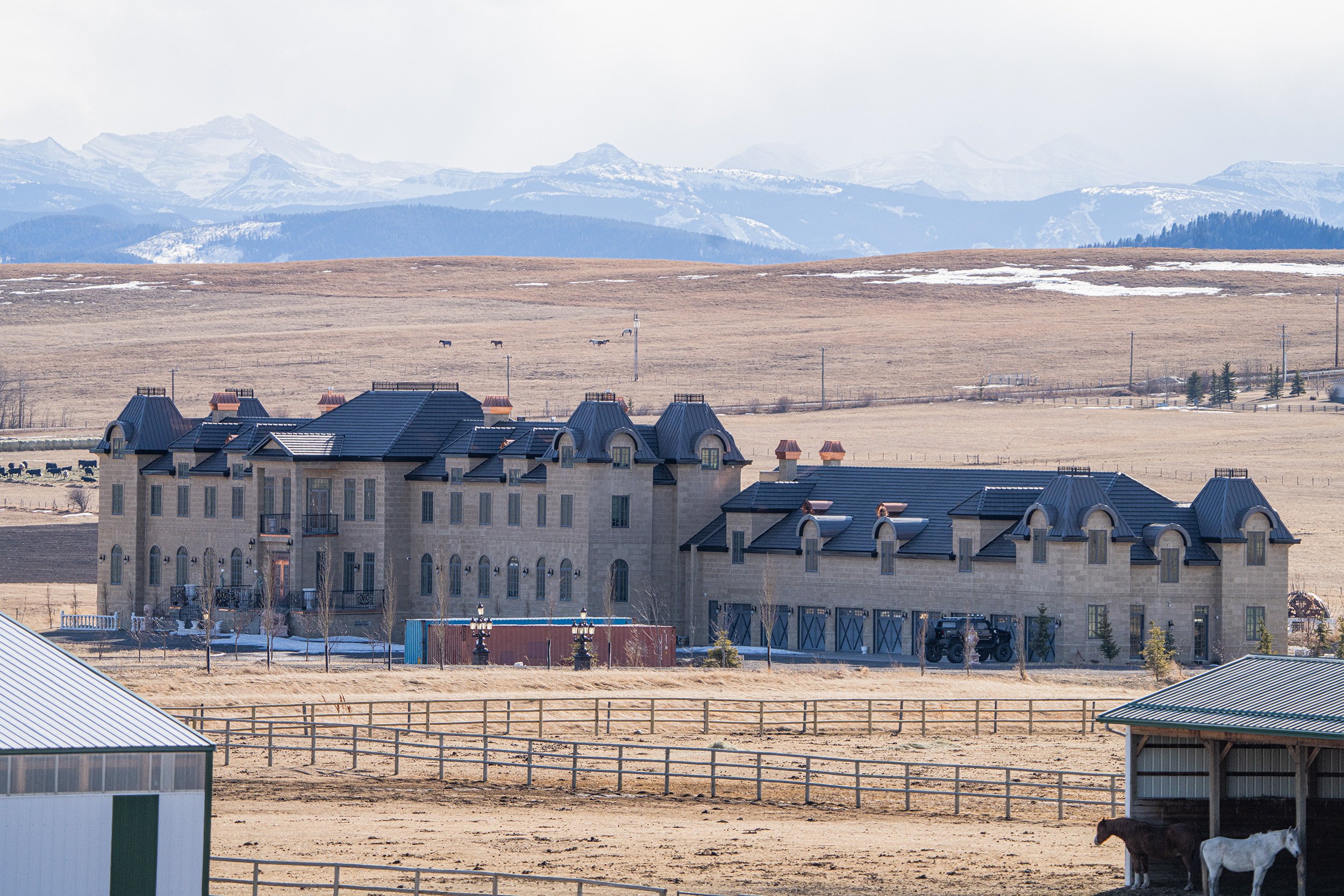 The fantasy, though, isn’t available to everyone on equal terms. Residents of cities in Western Canada are often unkind to wealthy Asian immigrants, whose homes are attacked as being out of touch with the native (read: British, European and American) aesthetic. Or, worse, they’re blamed for driving the “locals” out of suburban communities by driving up home prices. The racial animus behind these resentments is often thinly veiled, and I don’t resent Hon’s refusal to speak about this home in the least—although it does seem at odds with the statement the house makes for itself. Why build a home fronted by life-sized golden statues of horses and a winged man in a chariot in full view of a major highway if you don’t want to answer questions about it? What is the purpose of the edifice, if not status and publicity?

Hon is also not entirely shy on other topics. He frequently offers analysis on real estate generally, and has been the lead spokesperson for his company’s development projects. The Alberta Venture piece identified him as the lead spokesperson for major residential real estate projects in downtown Calgary, most notably the Guardian, a 44-storey building billed as the city’s tallest condo tower. “I see the future of cities as being very urban,” he told the website just prior to construction. “People are more interested in downtown living. Calgary’s late to this, but you’re seeing that revival of downtown after the 1960s, ’70s and ’80s—30 years of neglect.”

Calgary’s downtown is notoriously dull, and the only way to change this is to encourage more residents to give up their suburban McMansions in favour of smaller, denser pads. So far, this has been a difficult sell in a city grown fat developing cheap farmland.

Even the Guardian seems in its marketing to be acutely conscious of real estate as the biggest, and perhaps only, socially acceptable marker of class status. Its logo, two lions pawing at a castle tower, is reminiscent of a heraldic seal. Its website boasts of smooth white countertops, floor-to-ceiling windows, professional design, a shared garden terrace and a social club. It’s not just a place to live. It contains all the trappings an ambitious bachelor, or striving couple, would expect when looking for someplace to park before one day settling in their own little castle with a stone facade, an eye-catching copper-gilt roof and columns of stone at the front door.

Just as long as they plant a tree in front of it.

This article appears in print in the May 2021 issue of Maclean’s magazine with the headline, “Great Big House on the Prairie.” Subscribe to the monthly print magazine here.