Backyard offices, home gyms, rock-climbing rooms. Here are some of the spaces reconfigured with new realities in mind. 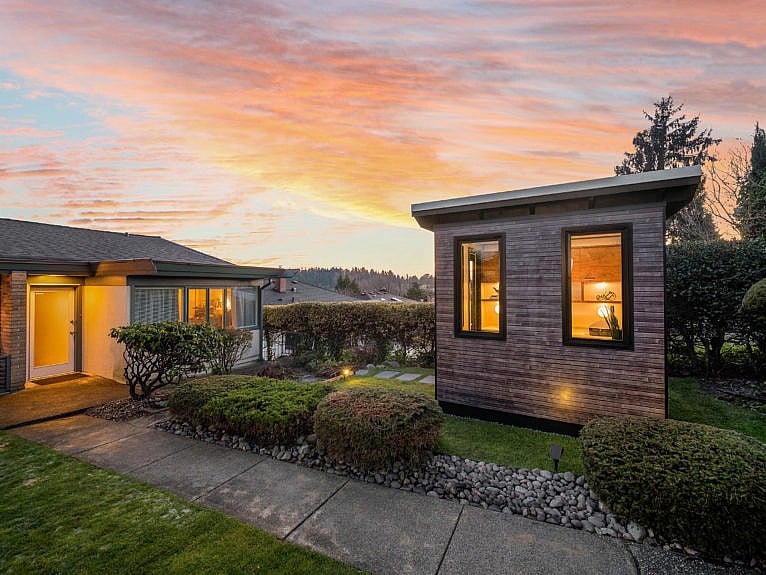 It took a global pandemic for many Canadians to realize their homes are not as spacious or multi-functional as events might demand. The closure of office spaces, gyms and—for a while—playgrounds left many families feeling cramped at home. Parents searched for quiet nooks to make Zoom calls, while kids deprived of hangout sessions with friends or sleepovers with grandparents sought any means of escape. Amid the on-again, off-again lockdowns, nearly half of Canadians said they already had, or were considering, home renovations, according to an Abacus Data poll released in March. Here are some of the spaces they reconfigured with new realities in mind.

Before COVID-19, when he had a toddler and a puppy who required his attention, Rick Whitfield would try to sneak in a few hours of working from home rather than going into the office. But his son loved to follow him around during his calls with colleagues, and he risked blowing his cover. “I would just circle the house and he’d be chasing me,” says Whitfield, laughing, “and I’m running away so no one hears him in the background.”

That’s how Whitfield got the idea of a backyard office pod—a separate, quiet space for work. The idea sat on the shelf, however, as the long-time TV and film production designer and art director got busy designing everything from Hindu temples to police stations for television shows. 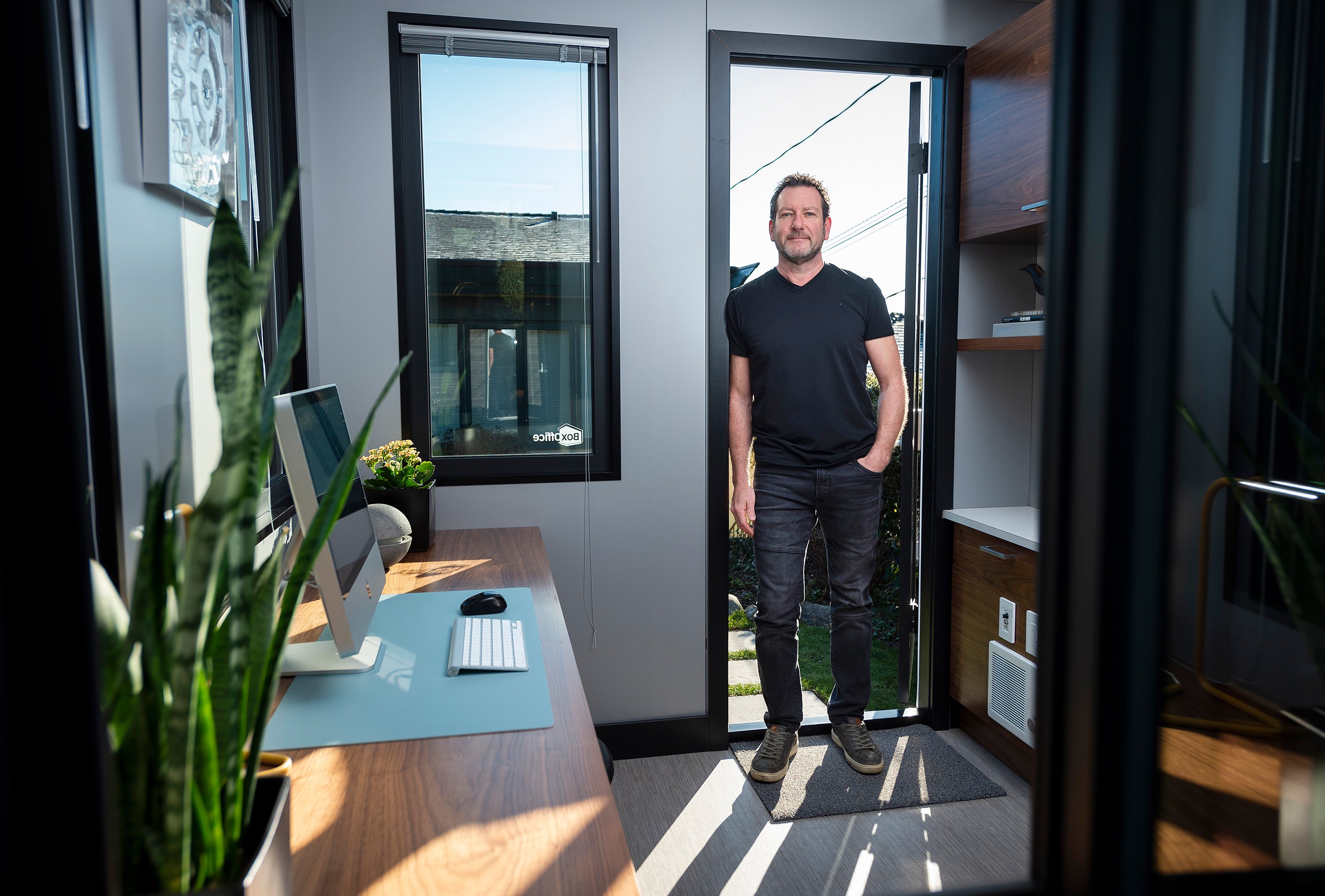 But Whitfield soon found himself out of work after the pandemic shut down much of his industry. So, with a surge of people needing home office space, he put his design-and-build experience to work, creating a prefabricated, self-contained office unit that can be delivered fully furnished to anyone whose property can accommodate it. He dubbed the company Box­Office, and the first unit was dropped off in December by crane to his own backyard in New Westminster, B.C.

Whitfield had long wanted a backyard office, but he’s no longer the only one in his household working from home: his wife, Angie, gets to use it, too.

Fit for life at home

Before the pandemic, Jen Bjarnarson was the only person in her family who worked out in the basement of their home in La Salle, Man. It wasn’t an ideal space. The home gym took up a small, square patch of a lower floor “chaotic with random basement stuff everywhere,” she says. And the carpeted floors left Bjarnarson with the occasional rugburn when she did exercises.

Bjarnarson’s husband and two teenaged daughters had gym memberships, but when COVID hit, they needed a place to exercise. “My husband started to say how it sucks working out on carpet,” Bjarnarson recalls. “I said, ‘I’ve been doing this for years.’ ” 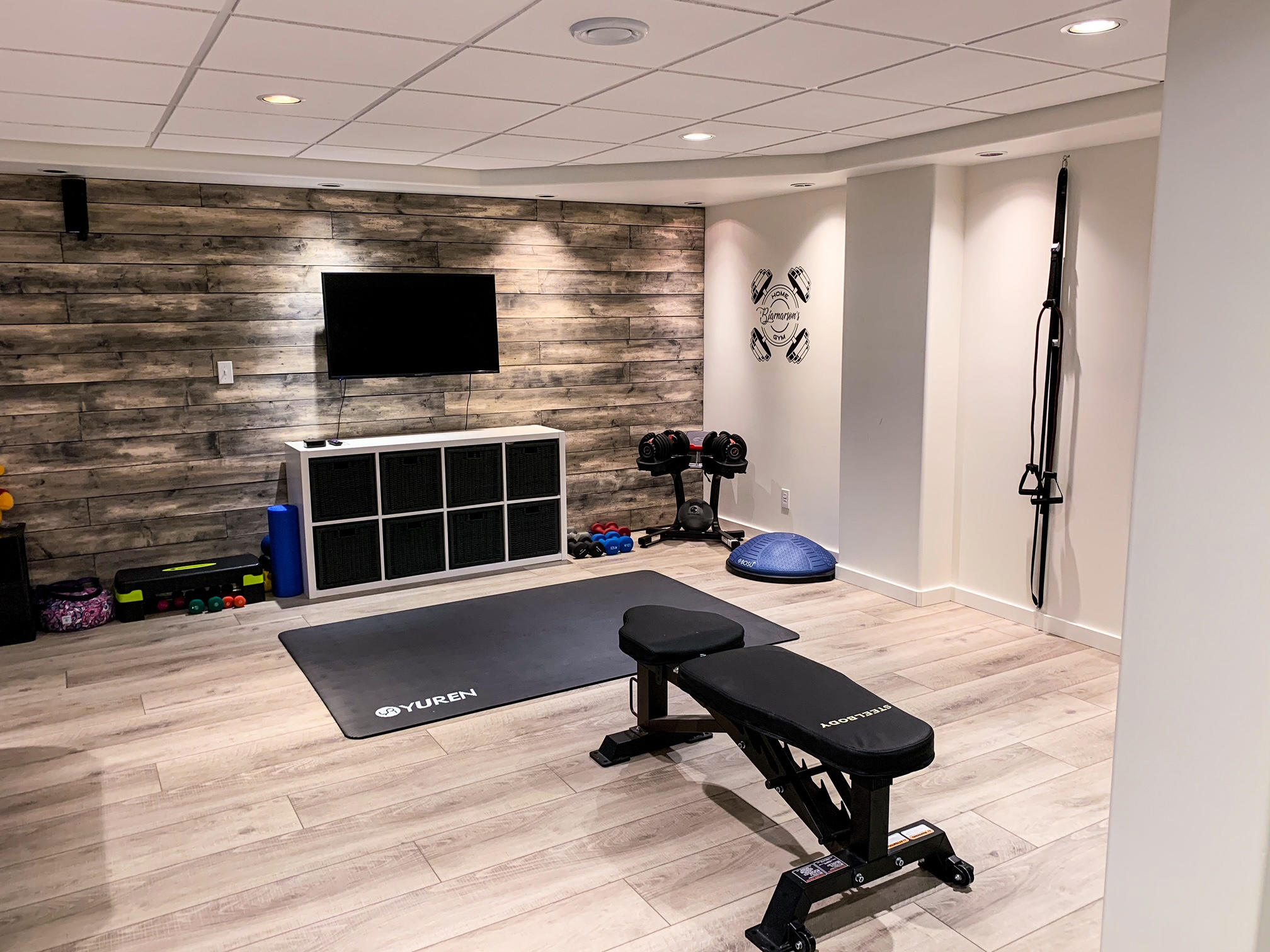 First they talked about simply replacing the flooring in the workout area, but the project ultimately spiralled into a full-scale renovation to create a home gym, with the work led by her husband and eldest daughter. They added a treadmill, a bench and a Bosu ball, plus a softball net where their youngest daughter, a competitive player, could practise her hitting. Everyone got their own yoga mat, and a sign adorns the wall: Bjarnarson Home Gym. (“Our kids think that’s the lamest decal ever,” Bjarnarson says.)

READ: The mystery mansion near Calgary that has everyone talking

Bjarnarson wakes up at 5 a.m. every day to start her morning routine. But with two daughters alternating days for in-school learning, there is always someone at home to make use of the space. “Before it was just for me,” she says. “Now it’s for everybody.”

In early 2020, Jen Nickel and her family were thinking about moving. With three kids—two of whom were sharing a bedroom—their home in St. Catharines, Ont., felt cramped. They’d dipped a toe in the market, visiting homes with a real estate agent, but then COVID hit, “and I didn’t know what my business would look like tomorrow,” recalls Nickel, an interior designer. “We didn’t want to commit to a crazy mortgage, so we thought, ‘Why don’t we do the best we can with this house?’ ” 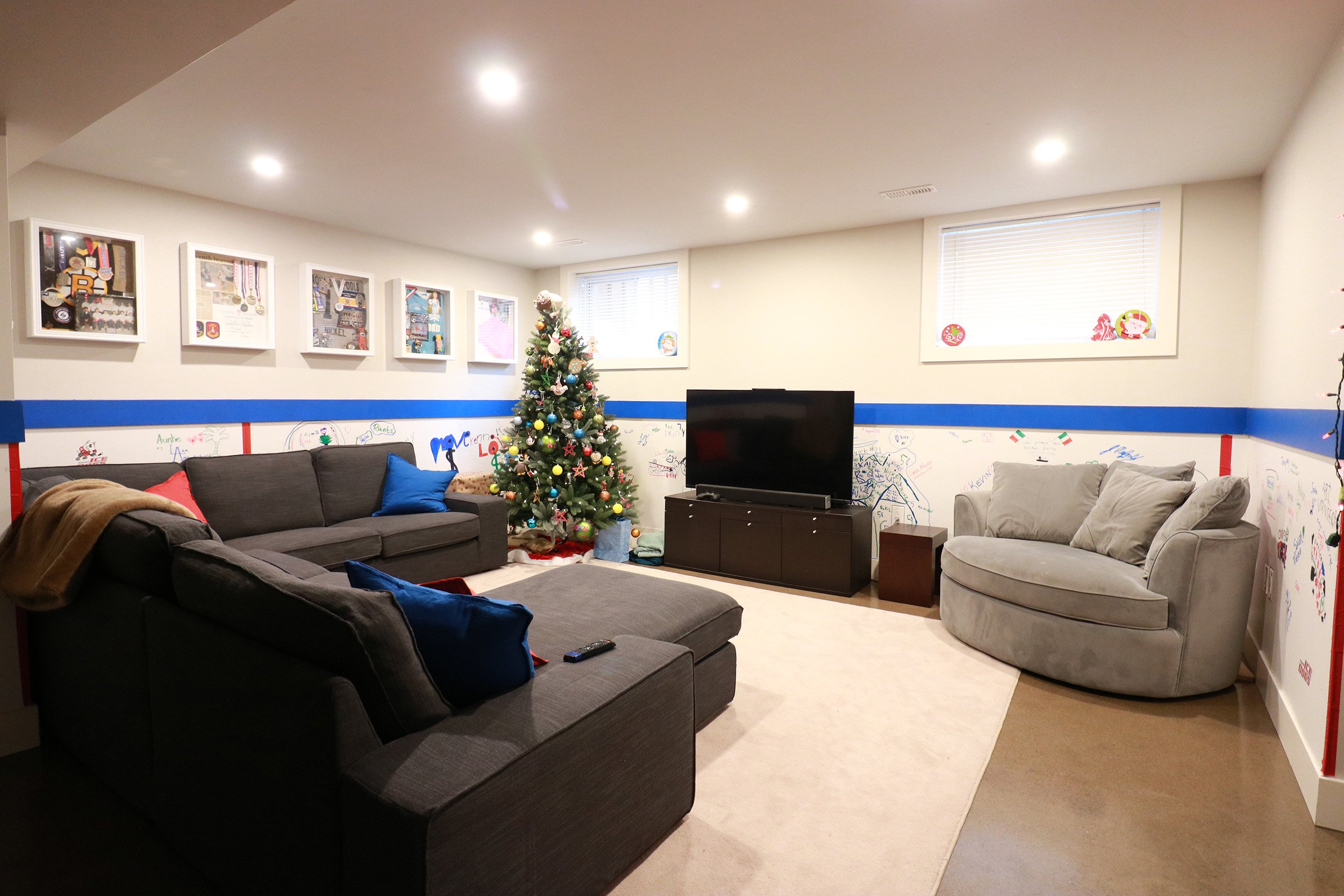 That meant fixing up their basement. It used to be a relatively simple play space, with fake hockey boards on the walls where the kids would play with mini-sticks. They didn’t have to worry about destroying anything because there was nothing to destroy. But the kids were growing up—their eldest is now in high school—and they wanted a space where the children could hang out with their friends online.

“The way they socialize during lockdown is over video games,” Nickel observes. “We’ve also been doing lots of family movie nights. We’re currently working through the Harry Potter movies.” The set-up includes a sound bar, subwoofer and 55-inch TV—though Nickel says her husband is lobbying for a bigger screen—plus headsets for the kids who are often playing Minecraft. It’s a far better atmosphere than the upstairs living room where they used to watch TV, and where someone inevitably had to sit on the floor. Now they have a large sectional and black-out blinds, plus a Murphy bed in case anyone wants to stay over. 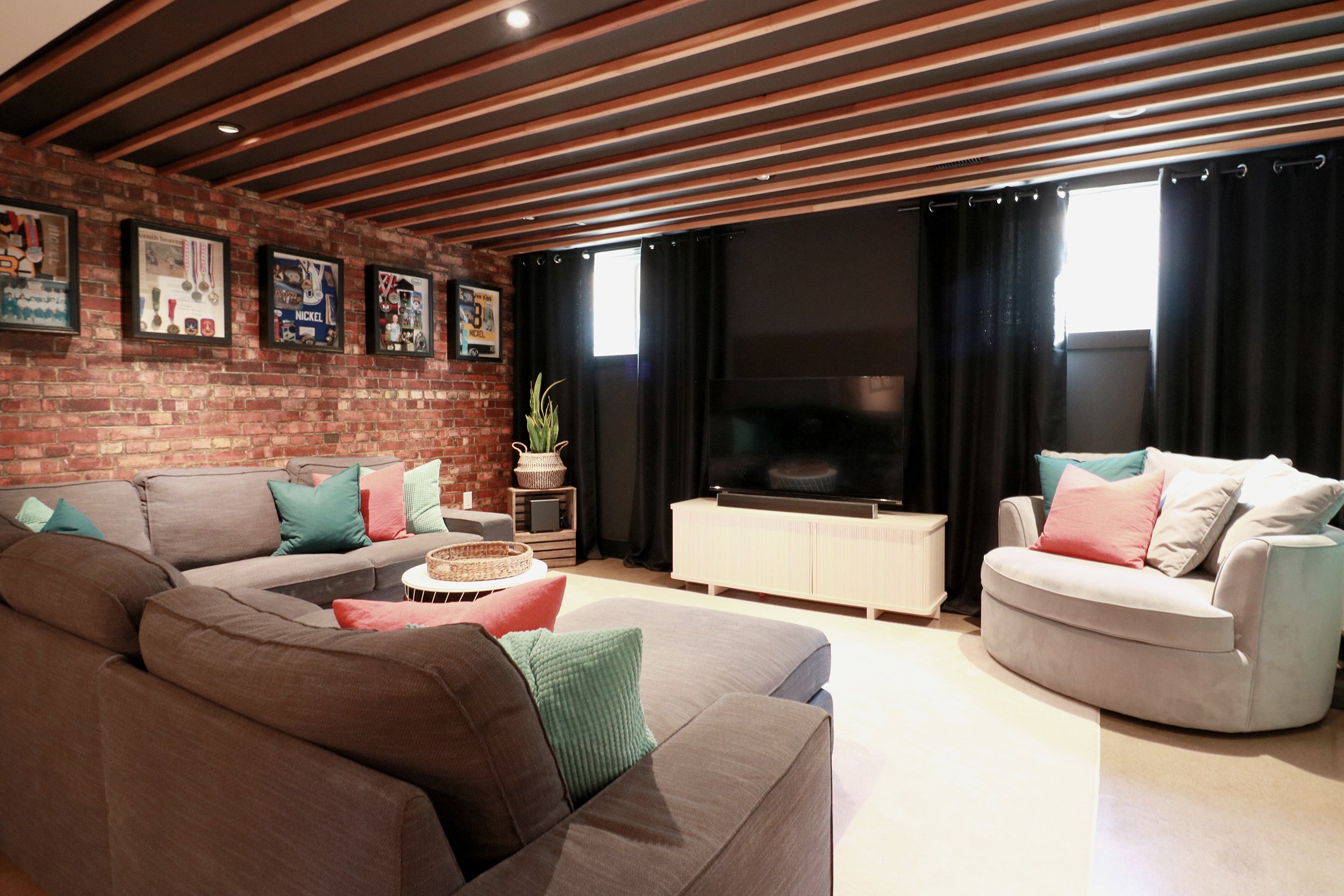 Nickel’s basement after the renos (Courtesy of Jen Nickel)

The brick-wall look is actually wallpaper—a reminder of a family road trip they took to Chicago the year before the lockdowns; their Airbnb featured exposed brick walls. They’ve hung photos of their favourite places from that vacation. “Now that my kids are getting older, they stay up later,” Nickel says. “We have to kick them out—it’s our turn to use the basement.”

Drive your kids up the wall

When city officials started to block off playgrounds with caution tape in the spring of 2020, Holly Thompson’s son and daughter complained. There was no point in going to the park anymore. They needed a place to have fun, and she needed them to burn off energy. “We’ve been pretty cautious throughout COVID,” Thompson says, “so even when we could go to parks again, we didn’t go for a while.” 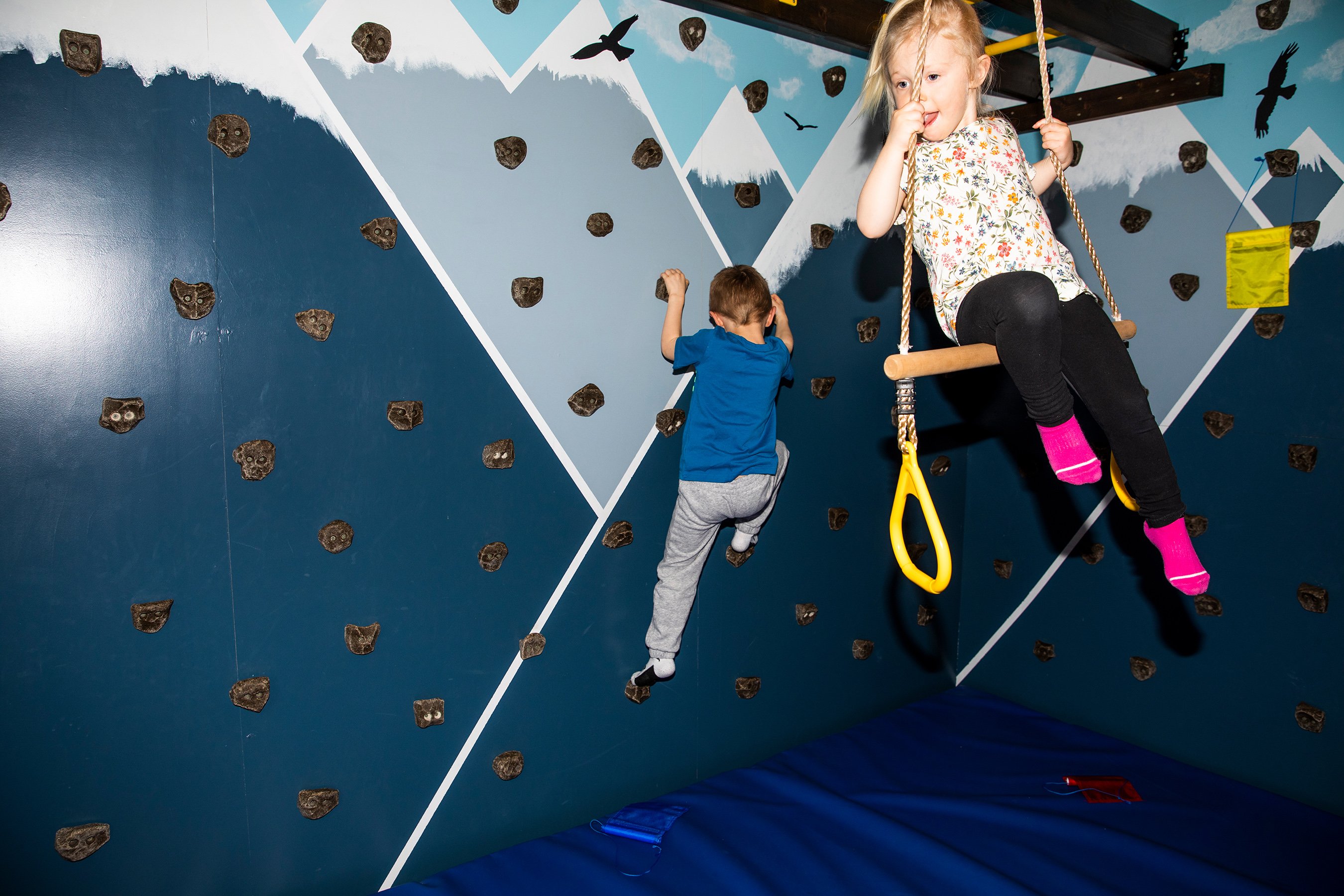 Their home in Guelph, Ont., had an empty room that was filled with toys, but it was largely a cluttered mess that the kids, now three and five, didn’t bother to use anymore. That’s when Thompson and her husband, Ryan, figured it was time to clear out the toys and recreate the space as an adventure room.

First, they installed rock-climbing space on several walls. “Then we painted it with mountains so it looked like you were climbing,” Thompson says. 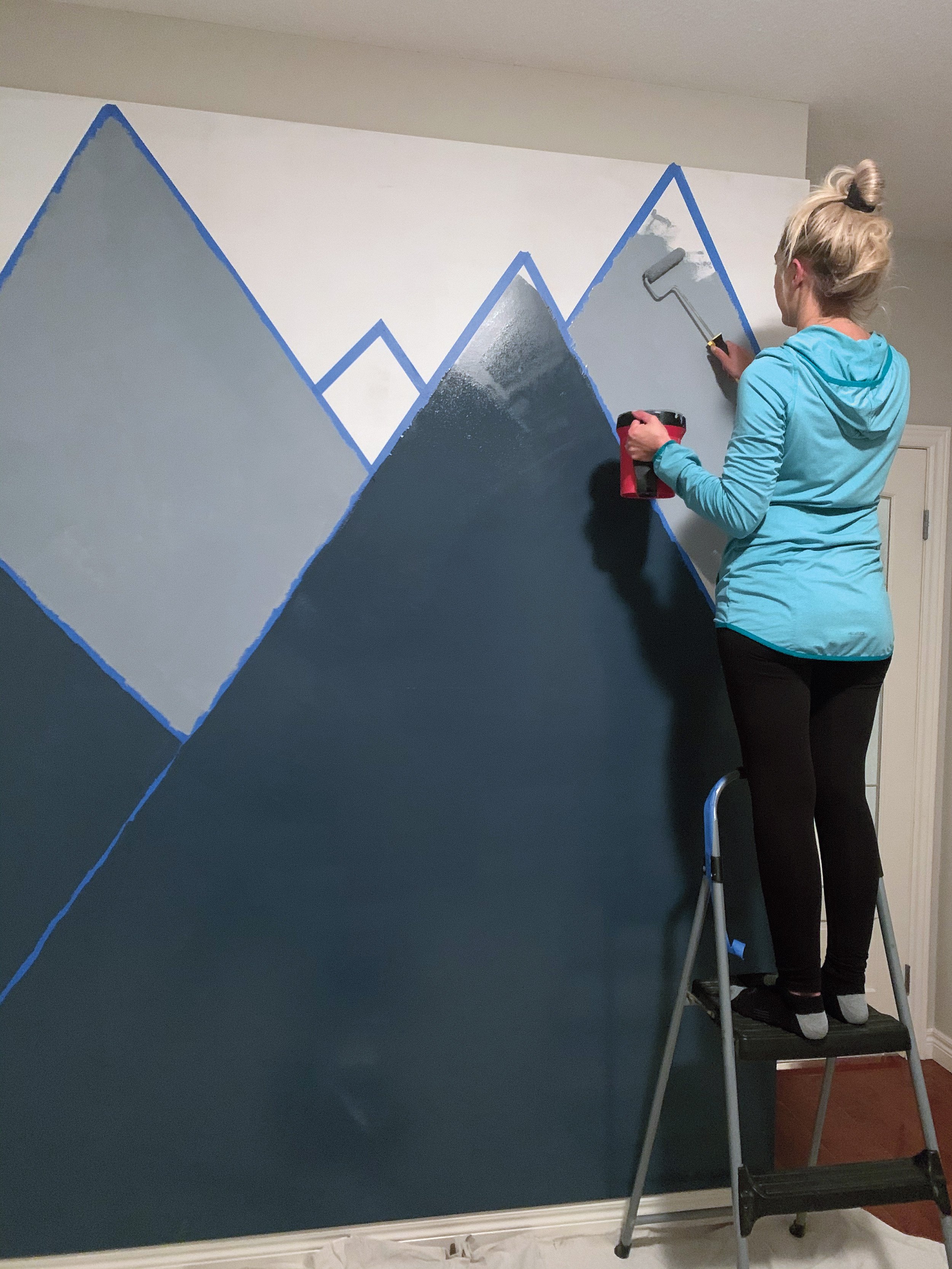 Next came monkey bars, but the only space they’d fit was above the rock-climbing hand-holds, which was quite high. So they had a 12-inch crash mat custom-made for the floor in case of falls. Finally, they installed a hook in the middle of the room for interchangeable accessories like a swing, a climbing rope and a gymnastics bar.

The kids use the room every day, with their mom and dad relegated to supervision.

But fun has not passed the grown-ups by. They keep themselves entertained with the golf simulator they installed in the garage.

This article appears in print in the May 2021 issue of Maclean’s magazine with the headline, “Building back better.” Subscribe to the monthly print magazine here.