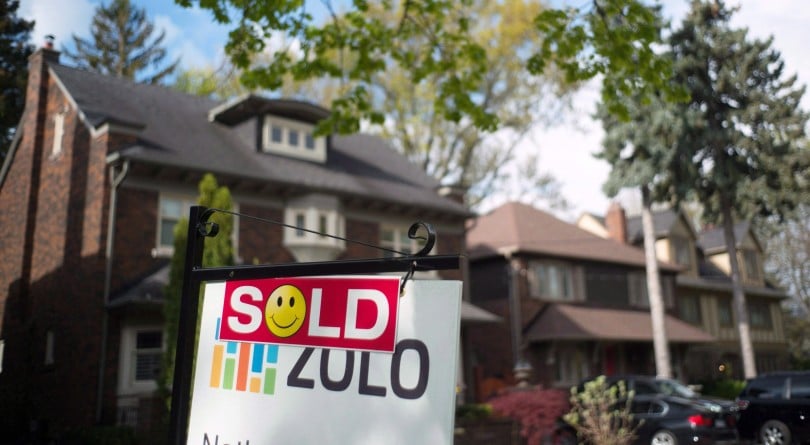 A sold sign is shown in front of west-end Toronto homes Sunday, May 14, 2017. The end might be near for a seven-year battle that has kept the public from easily finding out online what homes in the Greater Toronto Area sold for.THE CANADIAN PRESS/Graeme Roy

Anyone who’s ever lost a bidding war for a home—or seen a “sold” sticker slapped on a neighbour’s front lawn sign—often have just one question: how much do you think the house sold for?

In Toronto, that information long been kept relatively concealed from the masses. That is, until the Supreme Court this week rejected an appeal from the Toronto Real Estate Board (TREB), which has lost a seven-year battle in their attempts to restrict wider publication of home sales data. Some brokerages have already published sold listings online.

But this decision is more than a win for nosy neighbours eager to see the price tag behind a “For Sale” sign. Maclean’s spoke with Queen’s University real estate professor John Andrew and John Pasalis, president of Realosophy Realty Inc., to ask how this news benefits regular folks looking to buy or sell a home. Here’s what they said:

What it means for buyers

Anyone who has bought a home in the Greater Toronto Area over the past couple years can tell you about asking prices: they don’t mean a whole much. Real estate agents have long used the tactic of underpricing homes in order to get multiple offers, start a bidding war and sell the home well over asking.

READ: The people who bought at the peak of Toronto’s real estate bubble, and then lost hundreds of thousands within months

“The home buyers would see a $799,000 asking price but they didn’t realize it will eventually sell for over $1,000,000,” says Pasalis. And more recently, with the market not as red hot as previous summers, buyers are seeing the trend of sellers overpricing their homes—and eventually selling for slightly less than the listing price.

But now those prospective buyers will be able to easily access data on how much homes in the same neighbourhood and of a similar size are actually selling for. This will give buyers a better idea of what the home they want to buy is actually worth, he adds. “It will empower them to make better decisions,” says Andrew. “And the net result will be people listing their homes at lot closer to that average selling price. They won’t go $100,000 over.”

Not only will buyers be able to see what a house sold for, they’ll also see if a house just isn’t selling.

“Buyers will be now able to see the entire sales history for a house—the buying history and the listing history,” Pasalis says. “One tactic real estate agents use is if a house is taking too long to sell, they take if off the market and re-list it. What that does is it resets the ‘days on market’ so it doesn’t look like it’s been on the market that long.” If a prospective buyer’s real estate agent wasn’t diligent, they might think a house has been on the market for a week or two, when it’s really been up for sale for many months.

“If it sits on the market for that long, it raises some red flags: if everything else is going quickly, why not this one? Is it really overpriced or something else you don’t know?” Pasalis asks. “This will put the data in the consumer’s hand so they can do this research.”

The future of technology

Andrew says now that the Supreme Court has rejected TREB’s appeal, it marks a tipping point on real estate data—not just in Toronto and not just for final selling prices. He predicts real estate boards across Canada will throw in the towel on trying to keep such information private and start to distribute it widely. And once that information is out there, we might soon see technology that’s existed in the U.S. for years. For example, in the U.S., non-serious home buyers can log their desired home preferences into an app and get an alert on their phone when they’re driving through a neighbourhood that has a home for sale that ticks off all the boxes.

“In Canada, people say ‘that looks like a nice house’ but they don’t do anything about it because they don’t have a real estate agent and they don’t want to get one because they don’t feel too serious about buying a home,” Andrew says. “Real estate agents aren’t interested if you’re a casual browser.” But this publicized data could increase the amount of browsing clientele—and get them in touch with a selling agent at the click of a button.

What it means for sellers

With the easily accessible data, folks in Toronto wanting to sell their, let’s say, three-bedroom, one- bathroom detached home will be able to look up houses with those exact specifications that sold in their neighbourhood and have a much better idea of what they can expect in the sale.

There’s a deceitful trick—rare at it might be—done by unethical real estate agents. “You’re selling your home with an agent and your agent says it’s worth $1.6 million. It sells in a week and you think that’s awesome,” says Andrew. “But then you find out—through the grapevine—that same house got resold a month later for $1.9 million. And then you find out the person selling it was your real estate agent. This has happened.”

There’s no way a house appreciated in value that much in just a month—and the original seller feels scammed. “This is an industry that has a terrible track record of transparency,” Andrew adds.

But when prices are all publicly and easily accessible, this type of tactic would be more difficult to pull off and put to an end much faster.

For sale, by owner

No expert is predicting the extinction of real estate agents as a result of these new measures, but a few sellers might feel empowered to make more educated pricing decisions when selling without an agent—while avoiding having to pay a hefty commission fee.

If you live on a neighbourhood where some homes similar to yours recently sold, “notwithstanding some significant upgrades inside, you can probably nail that price within $20,000,” Andrew says. “Even if you’re wrong, the difference between [the sale price] and what it’s really worth is still half the commission.”

In short: buyers and sellers both come out on top in this scenario. “The more people can accurately determine the value of their own home,” Andrew says, “the less they need a real estate agent.”