Vancouver's real estate circus is driving even decently paid tradespeople to live in illegal encampments. So far, the city is turning a blind eye. 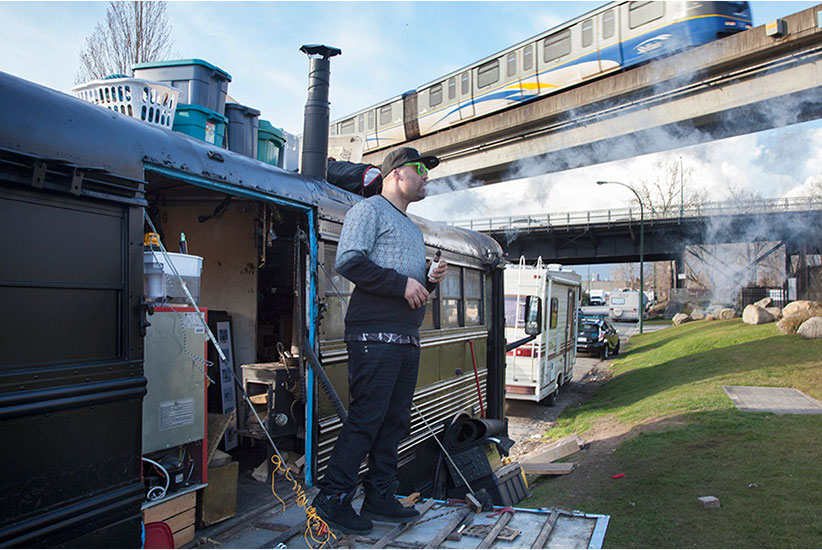 Mike Diddy, at his home in the lee of Vancouver’s Skytrain tracks (Photograph by Jennifer Osborne)

Kevin Royes lives the Vancouver real estate economy.  At the end of a long day landscaping at a newly-built 18,000-square-foot mansion in West Vancouver, he catches a ride home to his 1973 Dodge Sportsman in a pop-up RV park tucked away in an East Vancouver industrial area.

He is one of a number of construction industry workers illegally camped within sight of downtown high-rises, which on a sunny afternoon gleam in the distance like unattainable beacons of wealth.

There are about 20 inhabited vehicles parked beneath the Skytrain line near Glen Drive. But in Vancouver and North Vancouver, where rents are among Canada’s highest and vacancy rates less than one per cent, there are at least seven other pockets where people live full-time in vehicles tucked behind shopping malls or big box stores. Some, like Royes and Mike Diddy, whose home is a converted school bus, are employed in the region’s booming construction trade. Others are engaged in less savoury lines of work and others still are pensioners down on their luck.

READ: A shack in Vancouver is selling for $7 million. Here’s what you could buy elsewhere.

“There’s definitely some riff-raff, some seediness,” says Diddy, 38. “But there are also people who don’t want to throw their money away in a cramped little apartment with a view of a back alley.”

Diddy works as a drywaller on two towers where the cheapest condo costs $500,000. And although he clears more than $4,000 a month, his wages don’t go far in Vancouver, where monthly rents for new one-bedroom apartments run upward of $1,700. “For me to get a place I’d want to be, I would have to have two or three roommates and we probably wouldn’t get along at the end of it.”

Diddy, also a DJ, owns a matte black 1991 Blue Bird school bus that he drives to summer music festivals. Last June, after a run-in with his landlord, he moved into it full-time. Since then, he’s saved more than $10,000.

It is not illegal to live in a vehicle, but city bylaws prohibit oversize vehicles from parking on city streets for more than a few hours. Those whose vehicles still run try to move them at least a few feet every day. City officials are aware of the campers and generally don’t hassle the inhabitants unless someone complains. An adjacent business recently called in after one motorhome occupant ran an extension cord across the boulevard to steal power from an outdoor plug. That triggered a round of tickets, which start at $70, for everyone camped along the street.

“The city has been pretty lenient for sure,” says Royes, whose motor home bears a sign that, in a nod to Henry David Thoreau, reads: “Walden, an experiment in minimalism.”

Under the Skytrain bridge 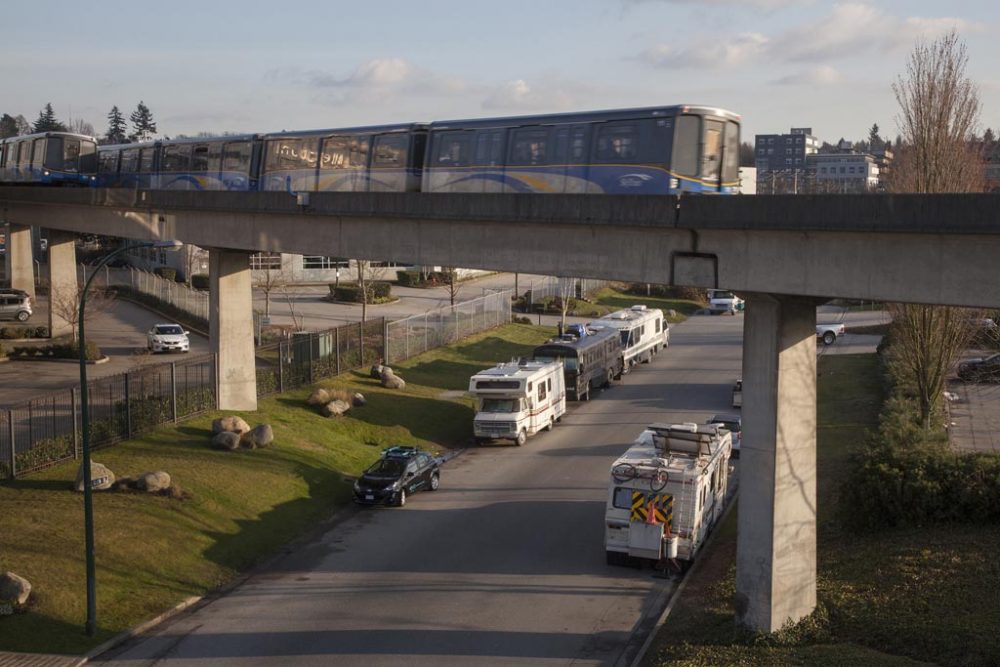 Royes’s life story is a riches-to-rags tale: He is the inventor of the Kelvin 23, an all-in-one handy tool once featured on Dragon’s Den. He sold the patent but lost everything on subsequent invention efforts. And while the dichotomy between his own circumstances and the wealthy homeowners who employ him isn’t lost on Royes, he isn’t resentful. “I have everything I need,” he says. “I have my coffee maker, a nice French press, and I just cooked a chicken- with-sesame-oil stir fry.”

Those living along the street are proud of their homes and green lifestyles. Many of the RVs have solar panels to charge batteries powering laptops and phones. Diddy’s two marine batteries run everything on board his bus, including efficient LED lights. “They last forever—as long as I’m not blending margaritas.”

While most campers along the strip seem to like where they live, they admit to some challenges. There were frigid nights this winter, says Royes, who couldn’t afford fuel for his heater. “But there’s a guy who sleeps against that wall,” he says, pointing at the bottle depot. “So, I just stopped complaining.”

Sanitation is a challenge for those living in vehicles without facilities. One passerby grumbled about human feces on the grass boulevard, though on this day the area appeared clean. Royes’ motorhome is broken down, so he hires a pump-out truck to come to him. Fred, who lives in a minivan crammed with his possessions and works as a carpenter for a temp labour pool, uses the nearby Home Depot washroom. He would not give his last name or age because he didn’t want friends from back east to find out how his life turned out. He looks at least 65 and seems lonely. His kitchen consists of a propane-powered burner, and a single bowl knife and spoon. “I eat really good. I think I’m a decent cook,” he says. He recently got some free-range eggs from an Abbotsford farm which were delicious and “not from a factory where chickens are in those little cages.”

Fred’s last job was on a 30-storey high-rise in North Vancouver. But temp work is sporadic, which is how he lost his last apartment. “I got behind,” he admits. Like everyone on the strip, Fred doesn’t complain. He’d rather talk about library books he reads, or a documentary he saw about East Timor.

Royes, for one, still dares to dream. His next project might involve converting motorhomes to look more like a tiny home. They would still be mobile and would not require land. But optics matter and he believes living in something that looks like a house would help legitimize this way of life. “I want to do this with dignity.”