Odds are on a soft landing for the Canadian housing market

Don't expect a U.S.-style crash. When you dig into the numbers, our housing market doesn't look all that bad. 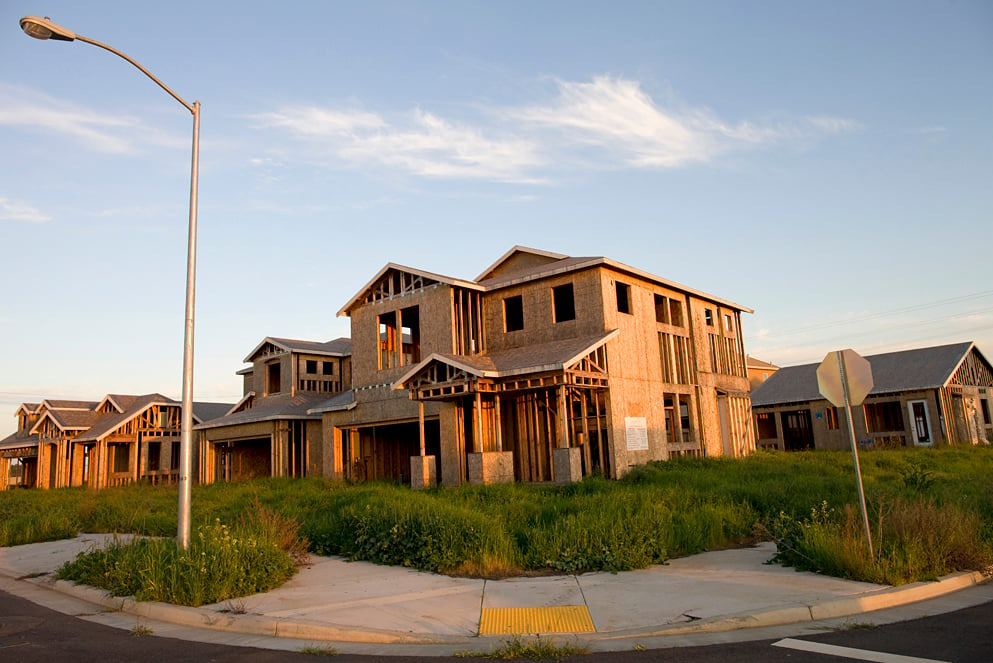 The U.S. housing market peaked eight years ago, then it crashed, and then it burned. So we’ve now been worrying for eight years about the prospect of a similar catastrophe in the Canadian housing market. The official voices—the Bank of Canada, the Department of Finance—are reassuring, but that’s to be expected: policy-makers are not in the business of provoking self-fulfilling panics.

Even so, I think the preponderance of available evidence points to a ‘soft landing’: prices will eventually stop increasing and may lose some of the gains of the past few years. The pace of housing construction will slow, and this will reduce employment and incomes in the construction sector. An outright U.S.-style crash is not impossible, but it is less likely than the soft-landing scenario.

This isn’t to say that there’s no reason for concern. Let’s start with the ratios of household debt to disposable income in Canada and the US:

Presumably some of the increase is due to an increase in car loans as car dealerships shifted away from leases. In any event, consumer credit leveled off five years ago; mortgage debt is the driving force behind recent household debt growth.

Having debt is one thing; what really matters is being able to pay it back. One of the triggers for the U.S. housing crisis was the sharp increase in the share of disposable income going to cover mortgage interest costs:

The increase in U.S. mortgage debt service ratios began in 2004. This increase in leverage only made sense in a world where housing prices continually increase, and that world ended when prices peaked in 2006. The wave of mortgage defaults began around the same time.

Debt service ratios in Canada have not followed this pattern:

U.S. homeowners started defaulting when debt service ratios reached all-time highs. In Canada, this isn’t happening. Debt service ratios did start to increase in 2006, but for various reasons—lower interest rates, spooked homeowners, tighter restrictions on mortgage lending—they’ve fallen below where they were in 2005 and are at the lowest level in more than 20 years (the data start in 1990).

The concern, of course, is the risk than an eventual increase in interest rates will drive debt service ratios to an unsustainable level. But when you dig into the numbers, the story doesn’t look all that bad.

The people most at risk from higher interest rates are people who are renewing their mortgages for the first time: they will have the least amount of home equity available to act as a cushion. Five years ago, conventional five-year mortgage rates were roughly 5.5 per cent. This table shows the effects of higher interest rates on the monthly payments of people renewing their mortgages for the first time:

The people who took out mortgages with longer amortization periods are most at risk to increases in interest rates. The move to longer amortizations was part of the general trend to looser mortgage standards, and this trend was reversed when the crisis hit. Forty-year mortgages were eliminated in 2008, so that last column is now moot. Thirty-five-year mortgages were discontinued in 2011, so the second-last column will only apply to a small number of outstanding mortgages.

To be sure, a 20-25 per cent increase in mortgage payments would not be welcomed by homeowners. But I don’t see how that would translate into a U.S.-style wave of defaults. For one thing, the starting point for the increase would be a historic low. For another, this would not be the first time that mortgage payments went up: the interest rate spikes caused by the disinflation of the early 1980s increases up mortgage payments by up to 60 per cent. But look what happened to mortgage delinquency rates:

Alberta is broken out to show the spike in delinquency rates in the early 1980s. I’m given to understand that this increase was at least partly due to changes in the laws reducing the severity of the consequences of default. What strikes me is that outside Alberta, more than 99 per cent of mortgages stayed current in the early 1980s even as costs skyrocketed. For some reason—maybe it’s the climate—Canadian homeowners are far less likely to risk foreclosure than those in the U.S.

This is not to say that an increase in mortgage interest rates would have no adverse effect. If households are obliged to spend a larger fraction of their incomes on mortgage payments, then they will cut back on other areas, and the resulting fall in consumer spending will have important effects. It’s not a coincidence that the most severe recession in Canada since the Great Depression was in the early 1980s: contractionary monetary policy has contractionary effects.

This doesn’t mean that current trends will continue forever or that nothing unpleasant will occur under the soft landing scenario. At some point, house prices will stop increasing, and this will have negative consequences for employment  the construction and real estate sectors—just like in previous housing market cycles.

It would be foolish to say that a U.S.-style housing meltdown is impossible. But available data seem to be consistent with the claim that it is unlikely.