How do young people afford a house? They find roommates.

When house prices are out of reach, some buyers will go to extreme lengths to get into the market 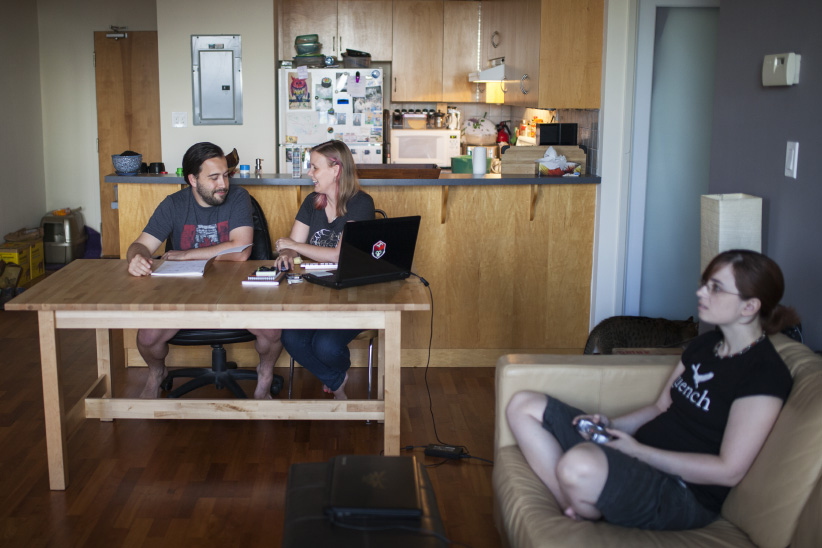 The last time Tabby and Jeff Rose lived with roommates was right after university and, as they will tell you, it sucked. There was hardly any privacy. Personalities conflicted. Their cat couldn’t stay with them because one roommate had allergies. They moved out shortly thereafter and for the next seven years, the Millennial couple lived in rented apartments while building up their own gaming company in Toronto. This past March the two made a major financial decision that would necessitate living with a roommate once again: they bought a home.

It was a “now or never” scenario, recalls Tabby, as she chats about buying the high-ceilinged 850-sq.-foot condo in the city’s trendy Junction neighbourhood. Since they got married in 2012, the average sale price of a home in the Greater Toronto Area skyrocketed from less than $500,000 to more than $700,000 in 2016. If they continued renting any longer, they worried, they’d never own a home in the city. Even with a gift from their parents, which covered a chunk of the down payment, the monthly mortgage payments and pricey condo fees put the coveted one-bedroom-plus-den home out of reach.

Enter their friend Jo Daly, who was looking for a place to rent. They knew they’d get along with her—Daly was maid of honour for their wedding—but the main reason Jeff and Tabby reached out to her was “purely financial,” Tabby says. “We can’t pay the bills without her.”

The cost of owning a home in hot markets like Toronto and Vancouver go beyond the eye-popping price tags, and are measured in the sacrifices buyers have had to make—just as dreams of owning a detached home in a leafy neighbourhood have given way to cramped condos, others are now giving up on the notion of privacy.

“As people feel they’re being priced out, they get more creative in how to get into the market,” says Ryan McKinley, a senior mortgage manager at Vancity. For some, entering the housing market requires letting strangers in their home.

“When you look at the home market for first-time buyers, to get in can seem like an insurmountable task,” says Aaron Zifkin, Airbnb’s country director for Canada. “In a lot of our host community meet-ups, we’re seeing a lot of people who are really excited being able to bridge that pay point by earning a little extra income from a nanny suite.” Or, if no nanny suite exists, the pullout couch in the living room might do.

In Vancouver, for example, more than half of the money taken in by the 4,200 Airbnb hosts went to pay for necessities like the rent, mortgage or groceries, according to a company report released in 2016. With the typical host earning $6,500 each year, more than half of them said the extra cash was a reason they could afford to stay in their home. Seven per cent said the money helped them avoid foreclosure.

Other families are getting into the housing market by not buying the whole house. Vancity, for example, offers “mixed mortgages,” whereby two parties co-buy a home.

Smiley Nesbitt and his wife own three-eighths of their 3,200-sq.-foot home in East Vancouver. The other portion belongs to another family, their “housemates,” as Nesbitt calls them. The arrangement has allowed both sides to buy in an area that would otherwise be out of their price range. Each party has its own unit, including kitchen and bathroom, while the backyard, including the garden and deck, is shared. If the house needs structural repairs or landscaping work, Nesbitt’s family covers their equivalent portion of the bill. Not only did this allow Nesbitt’s family to live closer to their work, thereby shortening their commute and allowing more family time, the other family’s kid “is a little bit older and has turned into an in-house babysitter,” Nesbitt says.

Since 2007, the living arrangement has worked out well, with the most contentious discussion being over which shade of green they should paint the outside of the house. (“I live with three graphic designers,” Nesbitt laughs.) That is, until earlier this year when his housemates started talking about selling their share of the home and cashing out of Vancouver’s housing market. As per the initial agreement, each family had first right of refusal to buy out the other at a price based on three independent appraisals. But that would have required Nesbitt to take out a mortgage of more than $1 million, as the value of their home had more than doubled since they bought it. “It became quite stressful,” Nesbitt says. “In the end, they decided to stay.”

As a realtor in Vancouver, Nesbitt uses his own experience to persuade clients to think about co-buying. “Part of being in a city where everyone wants to live, the prices are going to get to the point where you can’t have a white picket fence and backyard and each person with their own house,” he says. “A lot of the time when I sit down with clients, I’m mitigating their expectations to the point where it clicks and they say ‘maybe this is a good idea.’ ”

This generation of young homebuyers seems receptive to the idea. In 2015, an RBC poll found that fewer than 12 per cent of 18- to 24-year-olds would consider co-buying a home with a friend, yet just one year later that figure had risen to one in four.

Still, it’s one thing to buy a house but maintain separate entrances and units. It’s altogether different to share the same fridge, couch, TV and bathroom. The Roses and Daly in Toronto insist there are benefits to their unconventional arrangement. Daly buys the groceries, Jeff makes dinner and Tabby cleans up. “Nobody’s going to complain about having an extra pair of hands to deal with chores like getting groceries,” Jeff says. “And with how much we work, we don’t have a ton of social time, so it’s nice to come home to another face.”

But there are also downsides. If either Tabby or Jeff want to do laundry, they have to make sure their roommate isn’t in bed, as the washer and dryer are in her room. As a courtesy, even though they own the place, they still ask for permission to have friends over. They can also forget about intimacy when the mood suddenly strikes but the roommate is home. “We’ll just wait,” Tabby admits. That waiting game also applies to starting a family, as someone is occupying the space that would be the nursery. And if Daly moves out sometime soon, they’ll need to find someone else to replace her, and fast. If no permanent roommate is willing to live in the den—which doesn’t have windows, by the way—Tabby says they’d consider becoming Airbnb hosts to help pay the bills, even though it’s “not totally appealing to me.” The inconvenience is part of the cost of being a homeowner in Toronto in 2016.

For now, as the three eat tacos together on a warm July evening while watching Brooklyn Nine-Nine, the arrangement seems to be working out great. “It’s like a step up from Airbnb,” Tabby says. “Or maybe a step down. [People are] touting this sharing economy as a good thing when we’re really just giving up personal privacy to pay for anything in our lives. It’s kind of grim.”